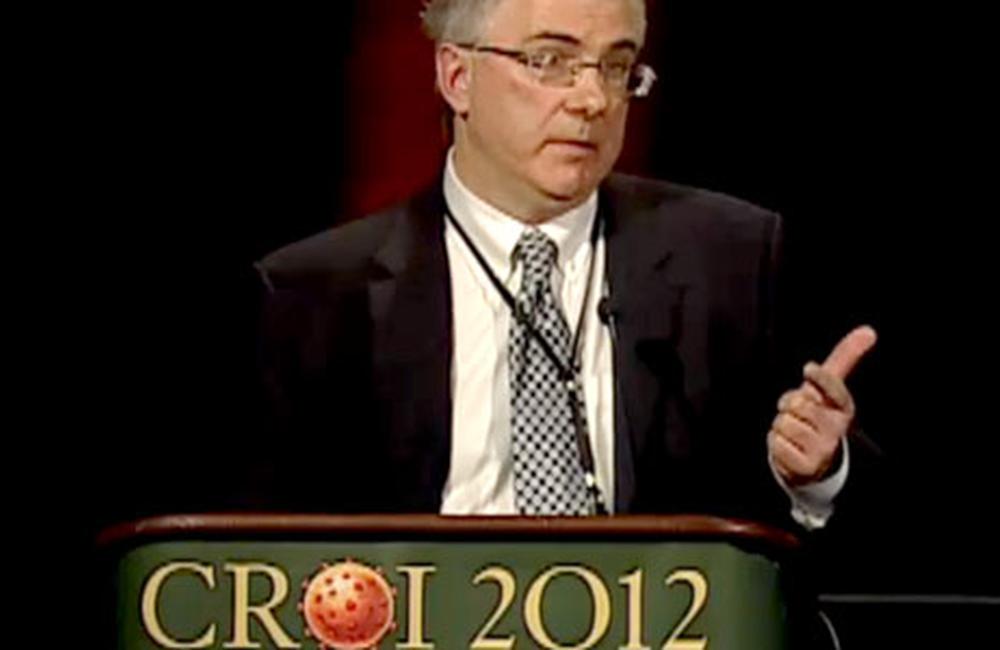 Peter Ruane, presenting at CROI. (http://retroconference.org)
This article is more than 9 years old. Click here for more recent articles on this topic

GS-7340, a pro-drug of tenofovir that reaches higher concentrations in cells, had superior efficacy and may be more suitable for inclusion in co-formulations, researchers reported on 7 March at the 19th Conference on Retroviruses and Opportunistic Infections in Seattle.

Gilead Sciences' tenofovir is among the most potent nucleoside/nucleotide reverse transcriptase inhibitors. Tenofovir disoproxil fumarate (TDF), marketed as Viread and also contained in the Truvada, Atripla and Eviplera combination pills, is a preferred agent in European and US antiretroviral treatment guidelines. GS-7340, a pro-drug of tenofovir that is converted into the active form in the body, was designed to better target lymphoid tissues and cells.

The analysis included 38 HIV-positive participants with viral load of at least 2000 copies/ml. They could be either antiretroviral-naive or experienced, but had no genotypic drug resistance at baseline. Almost all (97%) were men, about half were white and the average age was 38 years. The mean CD4 cell count was 444 cells/mm3.

"GS-7340 has the potential to be more efficacious with an improved safety margin, and to be easier to co-formulate, compared with TDF," they concluded, noting that an adequate dose of GS-7340 has one-tenth the mass of 300mg TDF.

No signals of kidney toxicity were reported in this study, a concern with TDF. Ruane said there has been no evidence of bone toxicity in dogs, but human studies are ongoing.

Based on these findings, Gilead has elected to proceed with the 25mg dose, which the researchers said provided "near maximal" antiviral activity. Ruane said this dose was chosen over the more potent 40mg dose because the smaller amount would be easier to put in single-tablet regimens.

To date, Gilead has announced two such products: a new version of the Quad pill containing GS-7340, the experimental integrase inhibitor elvitegravir, the novel boosting agent cobicistat and emtricitabine, as well as a protease inhibitor-based tablet containing GS-7340 plus darunavir (Prezista), cobicistat and emtricitabine. Studies of both new single-tablet regimens are underway.

A webcast of the session, State of the 'ART' and drug resistance, is available through the official conference website.

Doravirine injections were safe and long-lasting, but did not reach therapeutic levels

The D-peptide HIV entry inhibitor CPT31 is being developed with hopes it could be injected quarterly for both treatment and prevention.
POZ
2 Sep 20
Pharmaceutical industry

The drug firms Abbvie, Amgen and Takeda have begun treating patients in a trial to quickly show whether a drug from each company can be repurposed and used against COVID-19. Their experimental triple-combination contains Amgen's anti-autoimmune drug apremilast; Takeda's anti-inflammatory drug icatibant, which may stop fluid leaking into the lungs; and AbbVie's experimental anti-HIV drug cenicriviroc, which may dampen down the extreme immune response seen in serious COVID cases.
Thomson Reuters Foundation
4 Aug 20
New & experimental HIV treatments

What Are the New HIV Treatment and Prevention Drugs Under Development in 2020?

The FDA rejected CytoDyn’s application for its lead program, an antibody to treat HIV in combination with antiretroviral therapy, because it’s missing some information, the company announced Monday—two months after it revealed it had previously sent the wrong data sets to the agency.
FierceBiotech
14 Jul 20
New & experimental HIV treatments

Dewpoint Therapeutics, the biomolecular condensates company, announced today that it has forged an exclusive collaboration agreement with Merck, known as MSD outside the United States and Canada, to apply Dewpoint’s proprietary platform for condensate-based drug discovery to the development of a novel mechanism for the treatment of HIV.
Dewpoint press release
13 Jul 20
More editors' picks