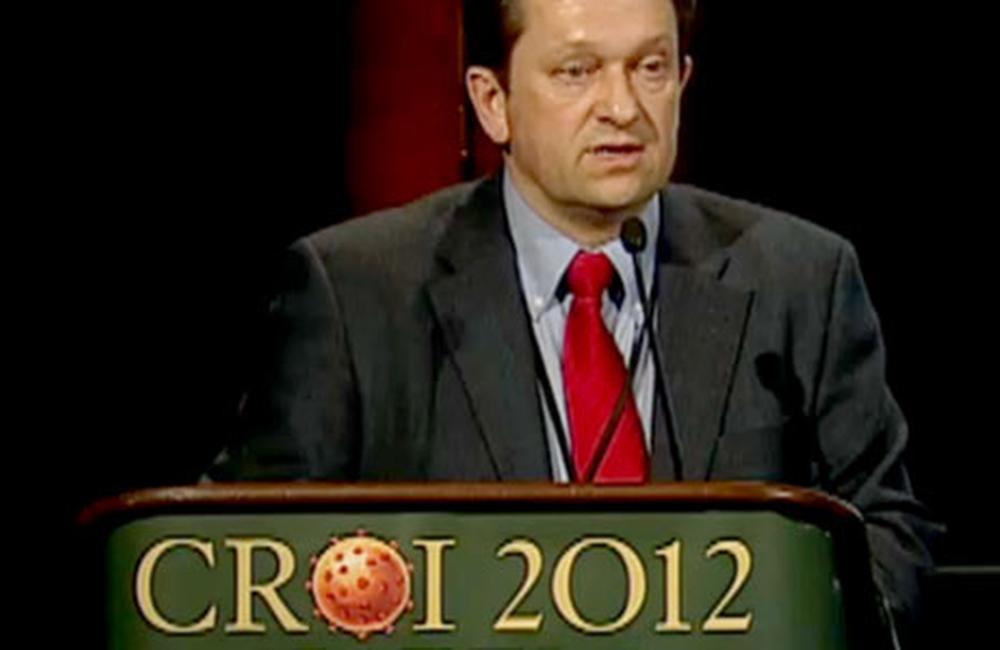 Hans-Jürgen Stellbrink, presenting at CROI. (http://retroconference.org)
This article is more than 9 years old. Click here for more recent articles on this topic

The next generation integrase inhibitor dolutegravir maintains viral suppression and remains safe after two years of use, according to a small study presented Wednesday at the 19th Conference on Retroviruses and Opportunistic Infections (CROI) in Seattle.

HIV integrase inhibitors prevent the virus from inserting its genetic material into host cells. The sole approved drug in this class, raltegravir (Isentress), has demonstrated long-term efficacy, has few interactions, and is among the best-tolerated antiretrovirals, encouraging development of more agents of this type.

Dolutegravir (formerly S/GSK1349572), produced by ViiV/Shionogi, is taken once daily with no need for boosting and no food requirements. Prior studies showed low potential for drug interactions and a distinct resistance profile.

This multinational study included 205 treatment-naive participants. Most (86%) were men, 80% were white, and the median age was 37 years. The average CD4 cell count at baseline was 324 cells/mm3 and one-fifth of patients had high viral load above 100,000 copies/ml.

Participants were randomly assigned to receive dolutegravir at once-daily doses of 10, 25, or 50mg, or else 600mg efavirenz (Sustiva or Stocrin), all in combination with tenofovir and emtricitabine (the drugs in Truvada; 67%) or abacavir and lamivudine (the drugs in Kivexa or Epzicom; 33%).

Findings from an unusual 16-week primary analysis and the typical 48-week analysis were presented at last summer's International AIDS Society conference (IAS 2011) in Rome. To assess longer-term safety and durability of response, researchers continued to follow patients in all arms through 96 weeks. The 50mg does was chosen for Phase 3 studies of treatment-naive people, now enrolling.

"Dolutegravir administered once daily with two NRTIs was associated with good treatment response at all doses", the researchers concluded. "Fewer subjects treated with dolutegravir discontinued therapy due to adverse events when compared to efavirenz.

A webcast of the session, State of the "ART" and drug resistance, is available through the official conference website.

Capsid inhibitor lenacapavir, dosed six-monthly, has high barrier to drug resistance and no cross-resistance to other classes

New data at the Glasgow conference on the capsid inhibitor lenacapavir included results on drug resistance. Although two participants in a proof-of-concept phase 1b dose finding study on each of the lowest doses developed a single resistance mutation, this will be overcome at the higher doses used for phase2/3 development.
i-Base
9 Oct 20
New & experimental HIV treatments

The D-peptide HIV entry inhibitor CPT31 is being developed with hopes it could be injected quarterly for both treatment and prevention.
POZ
2 Sep 20
Pharmaceutical industry

The drug firms Abbvie, Amgen and Takeda have begun treating patients in a trial to quickly show whether a drug from each company can be repurposed and used against COVID-19. Their experimental triple-combination contains Amgen's anti-autoimmune drug apremilast; Takeda's anti-inflammatory drug icatibant, which may stop fluid leaking into the lungs; and AbbVie's experimental anti-HIV drug cenicriviroc, which may dampen down the extreme immune response seen in serious COVID cases.
Thomson Reuters Foundation
4 Aug 20
New & experimental HIV treatments

What Are the New HIV Treatment and Prevention Drugs Under Development in 2020?

The FDA rejected CytoDyn’s application for its lead program, an antibody to treat HIV in combination with antiretroviral therapy, because it’s missing some information, the company announced Monday—two months after it revealed it had previously sent the wrong data sets to the agency.
FierceBiotech
14 Jul 20
More editors' picks