Treatment monitoring: no clear benefit to adding viral load to CD4 or clinical symptoms in Thailand and Africa 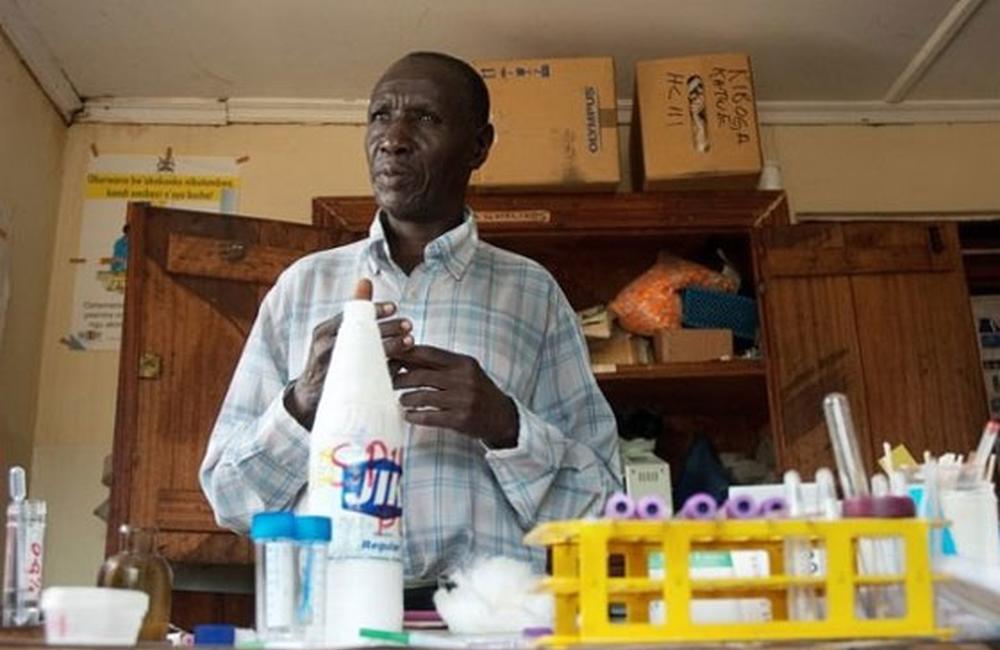 A lab technician at work in Uganda. Diagnostic equipment in rural health centres is often rudimentary. AMREF is helping to upgrade labs in Kiboga and Luwero districts. Image ©AMREF www.amrefuk.org
This article is more than 10 years old. Click here for more recent articles on this topic

Viral load is probably not essential for determining when to switch to second-line treatment in low- and middle-income settings, two large randomised trials conducted in Thailand and Cameroon have reported.

Clinical monitoring alone, without any laboratory tests, did not result in any worse outcomes for patients over two years in Cameroon, with the exception of having slightly lower CD4 counts by the end of the follow-up period.

The studies were presented on the first day of the Eighteenth Conference on Retroviruses and Opportunistic Infections in Boston.

The first study, conducted in Thailand, found that patients monitored with viral load and switched to second-line treatment if they had detectable viral load did not have a lower risk of death, new AIDS-defining illnesses or a CD4 count below 50 cells/mm3 after three years when compared to patients who were monitored by CD4 counting alone, and switched on the basis of a 30% decline in CD4 count.

The second study, conducted in Cameroon, found no significant difference in the risk of death, disease progression, viral suppression or drug resistance according to whether patients were monitored and switched on the basis of clinical signs or laboratory markers (CD4 and viral load) during two years of follow-up.

These findings support previous World Health Organization (WHO) recommendations that treatment scale-up is possible without complex laboratory monitoring, and also call into question recommendations issued by WHO in 2010 that viral load should be included in national laboratory monitoring systems wherever possible in order to detect treatment failure.

The gold standard for monitoring of antiretroviral treatment is regular monitoring of plasma viral load, both to determine that undetectable viral load has been achieved after starting treatment, and to ensure that viral load does not rebound above 50 or 400 copies/ml, the limit of detection of the viral load test.

If viral rebound occurs it is recommended that a switch of treatment takes place, in order to prevent the development of further resistance, further viral rebound and subsequent immunological and clinical deterioration.

In low- and middle-income settings viral load testing is not widely available owing to cost and lack of laboratories and trained staff to carry out the test. In many settings CD4 counts have been used to determine when treatment is failing: a 30% decline is generally considered to indicate a genuine deterioration rather than just natural day-to-day variation in the level of CD4 count.

WHO recommends that a switch to second-line treatment should take place if a 30% decline from its peak value occurs on treatment.

However, several studies have determined that using CD4 counts in this way to switch patients can result in a surprisingly high number of unnecessary switches. Studies in Uganda and Kenya have identified numerous cases of needless switching in patients who turn out to have undetectable viral load, even when their CD4 count has declined.

A study in India found that a confirmatory viral load test prevented one out of four switches in cases of CD4 cell decline.

In its 2009 updated treatment guidelines WHO recommended that viral load should be used to detect treatment failure through six-monthly monitoring, and/or to confirm the need for a treatment switch, but acknowledged that the quality of the evidence to support this recommendation was low.

What would count as higher quality evidence is published results from multiple randomised studies, and on the first day of the conference two international research groups presented data from large randomised studies that examined the impact of laboratory monitoring that includes viral load testing on a range of treatment outcomes.

The PHPT-3 study was carried out in Thailand.

The study was designed to compare clinical monitoring and laboratory monitoring strategies, and to assess their impact on clinical outcomes and on utilisation of second-line treatment in a setting where second-line drugs are significantly more costly than first-line treatment. The investigators wanted to determine whether managing HIV treatment without viral load tests significantly harmed the health and future prospects of patients.

Patients in the CD4 count monitoring arm were switched to second-line protease inhibitor-based treatment if they experienced a 30% decline in CD4 count from peak values. Patients in the viral load plus CD4 monitoring arm were switched if they had a confirmed viral load above 400 copies/ml. All patients were monitored at three-monthly clinic visits.

The primary endpoint of the study was clinical failure on treatment or a CD4 cell decline below 50 cells/mm3. The secondary endpoints were rates of switching to second-line treatment, time to switching, viral load, and future drug options (calculated by scoring the number of available drug classes and the number of drugs available within each drug class based on resistance testing).

Also, it was discovered that 15 of the 31 patients switched on the basis of CD4 decline in the CD4 monitoring arm still had viral load below 50 copies/ml at the time of switching.

Presenting the results Dr Marc Lallemant concluded that adherence support was probably more important than virological monitoring in settings where resources are limited and that support from the healthcare team, particularly nurses, probably explained the very high rates of adherence and virological suppression seen in this study population.

The study recruited 459 patients, 70% female, at rural clinics in the Yaounde region of Cameroon. Participants had a median CD4 cell count of around 180 cells/mm3, and high viral load (5.6 log). Around two-thirds received a fixed-dose regimen of d4T, 3TC and nevirapine.

Patients were followed for a mean of 24 months, with no difference in loss to follow-up rates between the two arms. After 24 months there was no significant difference in drug switches due to toxicity, but 6% of the laboratory monitoring group had switched regimens due to defined treatment failure, compared with none of the clinical monitoring group.

There were no significant differences in outcomes that had a material impact on survival or future treatment options, such as viral load suppression, drug resistance, mortality or clinical progression at month 24, but by the primary endpoint of the study – change in CD4 count from baseline – clinical monitoring was found to be non-inferior.

This was due to the fact that the mean CD4 cell count in the clinical monitoring arm was 31 cells/mm3 lower after 24 months by last-observation-carried-forward method of analysis, but the confidence intervals for that difference ranged from -63 to +2 cells/mm3, so the lower limit of that confidence interval lay outside the pre-specified margin for non-inferiority.

Nevertheless, patients in the clinical monitoring arm gained an average of 175 cells/mm3 during the 24-month follow-up, and the significant divergence in CD4 cell counts only became apparent after month 18 of follow-up.

On this slender basis presenter Charles Kouanfack argued that the study findings justified WHO recommendations for viral load monitoring, and supported the need for the development of point-of-care viral load testing.

However, he also acknowledged that the result of the Cameroon study is similar to the finding of the DART trial of antiretroviral monitoring strategies, which found that the difference in risk of death between patients who received clinical or laboratory monitoring was small in the first two years of treatment, and that an increased risk of death for patients in the clinical arm only emerged after at least two years on treatment.

Neither presentation reported on the cost-effectiveness of adding viral load to monitoring.

The webcast from the conference session Research on Delivery of Care in Developing Countries, includes the speakers Marc Lallemant (presenting abstract 44) and Charles Kouanfack.

Researchers with the UK-CHIC observational cohort analysed patterns of viral rebound in 1574 gay men starting ART during 2015 and 2016 with CD4 counts >350 cells/mm3 and more than one viral load <50 copies/mL.
i-Base
25 Jan 21
Viral load

Undetectable to viral rebound: When and why?

Researchers are trying to understand treatment interruptions as part of work to develop a future HIV cure and therapies that will not involve medications.
TheBodyPro
10 Jun 20
Health monitoring in resource-limited settings