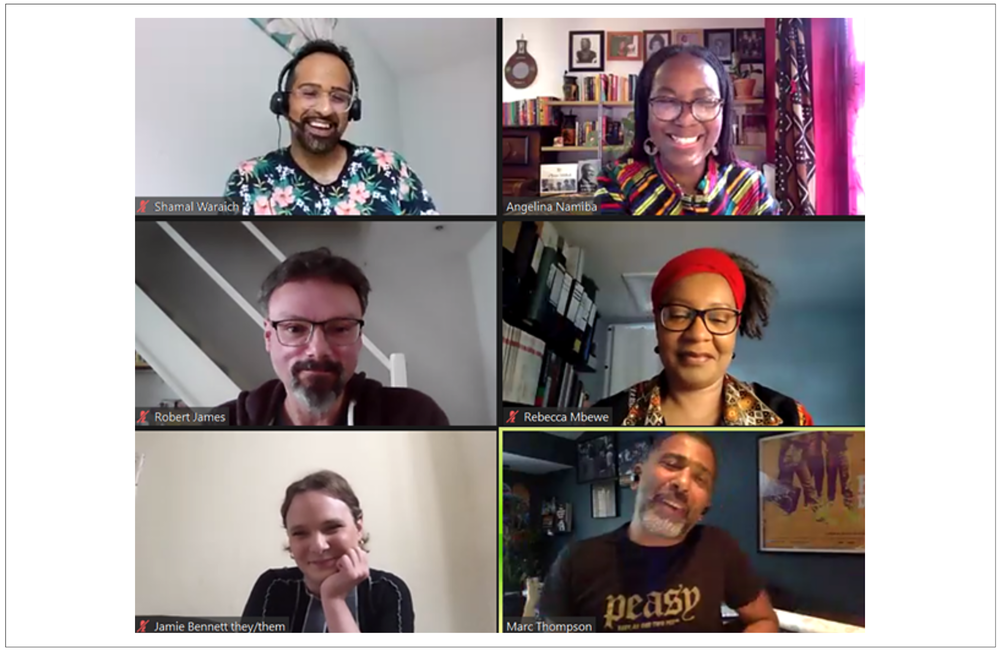 Rebecca Mbewe and other advocates at the launch of the report.

A new report reveals patchy knowledge of HIV, low awareness of key developments like U=U and PrEP, and stigmatising perceptions of people living with HIV. The findings reveal “confusing and contradictory” views about HIV among the general public in the UK.

“The findings were not surprising, a little bit reassuring, but the report has just highlighted what we’ve always known and continue to experience in our daily lives,” commented advocate Rebecca Mbewe at the launch of the report yesterday.

The data comes from a National AIDS Trust and BritainThinks report on public knowledge and attitudes on HIV, which highlights differences across a range of demographic groups in the UK. BritainThinks conducted community stakeholder groups, held exploratory focus groups, conducted a nationally representative online survey of 3000 people and held deep dive focus groups to explore the key themes from the survey responses. They identified six key findings.

1. Most of the public don’t think or hear much about HIV.

Most participants reported feeling that they only ‘occasionally’ heard about HIV. TV programmes and films were reported as the most common way to hear about HIV, although just 21% of the public could recall one. One of the focus group participants shared:

“A lot of the adverts on TV and radio are about mental health and cancer, and don’t really concentrate on this at all. There’s not much awareness or education.”

2. Knowledge of HIV is patchy amongst the general public.

Awareness of high-risk modes of transmission such as unprotected sex or sharing a syringe is high amongst the general public. However, 57% of the general public have a ‘middling’ knowledge of HIV transmission, commonly identifying at least one mode of transmission that carried no risk at all. The most frequently selected ‘no risk’ modes selected by the public were: standing on a used needle (61%), a blood transfusion in the UK (59%) and biting (36%).

South Asian people were significantly more likely to have a ‘lower than average’ knowledge of HIV transmission at 56%. Similarly, younger people (35%) and Londoners (32%) were also more likely to be in this category.

Public awareness of U=U is low, with 57% believing it is false that effective treatment prevents transmission of HIV. Few people were aware that most people living with HIV in the UK are on effective treatment and that this reduces transmission risk. Many were worried that U=U relies on people living with HIV consistently taking their treatment. There was a strong sense that it is “too good to be true”, with specific doubts about its real-world efficacy.

“People are not aware whether they can catch it or not catch it. People are not fully experts about this, I don’t think anyone is.”

Only a quarter of the general public believe that there is medicine available that can stop someone acquiring HIV. Awareness of PrEP and U=U was highest among gay and bisexual men and those who know someone living with HIV.

3. HIV continues to be seen as a serious health condition by the public.

Around 48% of the general public think of HIV as a serious health condition. Those most likely to agree were Black men (69%) and south Asian people (56%). However, there was a strong sense among the general public that HIV is a less urgent issue now than it had previously been.

“HIV is not as much of an issue as it used to be for UK society.”

Participants explained feeling this way because of:

Some focus group participants felt that a ‘new narrative’ around HIV has started to cut through. Participants mentioned recent examples of information and content about HIV (such as the TV drama It’s a Sin) as ways to improve education and address stigma. In particular, depictions in TV and film, and celebrities and influencers talking about HIV, are seen as particularly vivid and engaging formats.

4. Most of the public say they are empathetic towards those living with HIV. However, sympathy and support is often qualified.

Around 85% of the public agree that people living with HIV deserve the same support and respect given to those with other health conditions. Those most likely to agree with this were those who recognise barriers against LGBT people, those with a high or middling knowledge of transmission, and those with a high or medium awareness of PrEP.

There are also key differences in racial demographics, with White and Black people significantly more likely to agree (86% and 88%) than south Asian people (75%). However, only a third of the public say they have sympathy for all people living with HIV, regardless of how they acquired it. Around a quarter of the public agree that a family member telling them that they are living with HIV would negatively impact their relationship with them.

“I think there is a bit of a difference sadly… someone who is born with it, it is out of their control. Someone who has acquired it, is it sex without a condom, or an exchange of bodily fluid, it could be because they’re not protecting themselves.”

5. Stigma towards those living with HIV continues to exist and is felt to be deeply entrenched.

The majority of the public believe society is more positive towards people living with HIV than it has been in the past. However, LGBT people and those who personally know someone living with HIV were most likely to disagree with this statement.

“Everything you hear about HIV is negative. Until they change the narrative, that’s not going to change.”

However, many in the focus groups were hesitant to share their unfiltered views about people living with HIV. This indicated a strong element of social desirability.

6. Most of the public say they are uncomfortable with having a sexual relationship with someone living with HIV.

Only 3% of the public indicated that they would be comfortable having a sexual relationship with someone living with HIV. The concerns about this centred on two themes: risk of acquiring HIV, and stigma and judgement from others. A specific focus was the safety of future children, which participants assumed would also acquire HIV.

“People living with HIV should always tell any sexual partners, even if they definitely can’t pass it on because they are on effective treatment.”

A large majority of the public think that people living with HIV should always tell sexual partners their HIV status. Participants expressed that there is a risk to personal health and that people should be able to make an informed decision about whether or not to continue with the relationship or sexual encounter.

However, there was sympathy for people living with HIV and the complexities of having to navigate this. It was recognised that this could be a cause for stress and anxiety and that there could be situations in which personal safety is put at risk because of sharing.

Knowing key information about HIV decreases some discomfort about relationships with people living with HIV. Some focus group participants felt that key messages such as U=U were important for reducing stigma and that they should be shared more widely. It was felt that that this would encourage people to want to find out more and be more open to the idea of a relationship with someone living with HIV.

“Knowing there’s something that almost eradicates it [makes a difference].”

Speaking at the report launch, Professor Jane Anderson of Fast-Track Cities London said, “This is only the start, we know much more know [now] about what we might need to challenge, which is an important head start.”