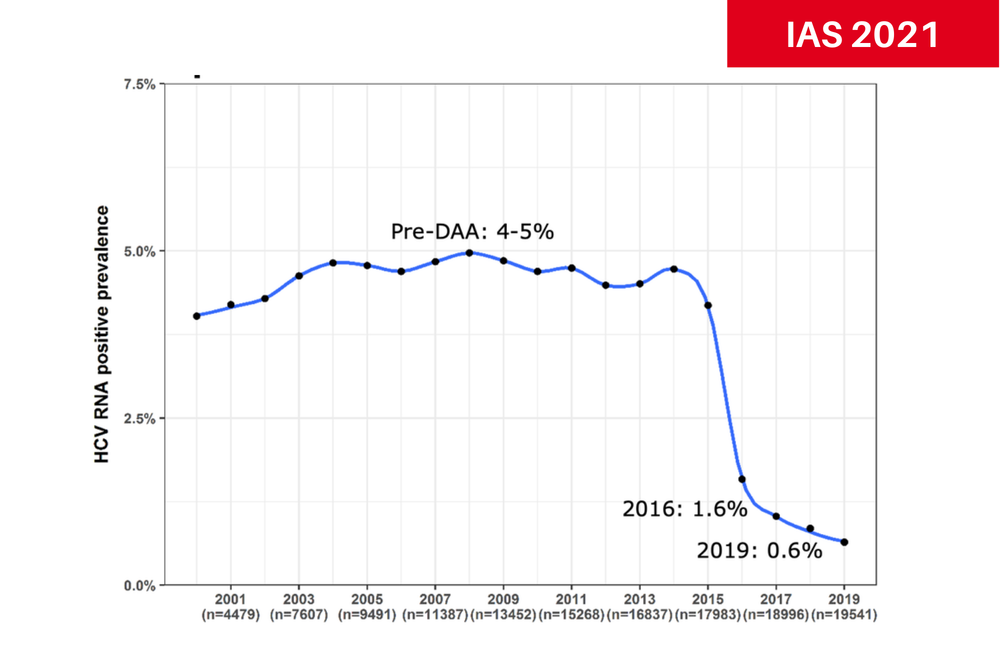 Hepatitis C has been almost eliminated as a health problem for people living with HIV in the Netherlands due to direct-acting antiviral treatment, researchers reported this week at the 11th International AIDS Society Conference on HIV Science (IAS 2021) .

They found that only 29 people in the Dutch national HIV cohort still had chronic hepatitis C infection by the end of 2020. Although all could potentially transmit hepatitis C to others, doctors considered this likely in only three cases. Their findings suggest that the potential for onward transmission of hepatitis C from people with hepatitis C and HIV co-infection in the Netherlands has been virtually eliminated after very high uptake of treatment.

The World Health Organization has set targets for global hepatitis C elimination by 2030, so that 80% of people with chronic hepatitis C infection have been treated and new cases have fallen by 90% compared with 2015. At a national level, elimination of hepatitis C depends on screening, diagnosis and linkage to treatment, as well as availability of treatment. Population groups with a high prevalence of hepatitis C, such as people living with HIV, have been prioritised for micro-elimination campaigns.

In the Netherlands, 98% of adults and children with HIV who are in medical care are part of the ATHENA (AIDS Therapy Evaluation in the Netherlands) cohort. Dr Cas Isfordink of the University of Amsterdam Medical Centre and colleagues from the ATHENA cohort carried out an evaluation of the prevalence of chronic hepatitis C virus (HCV) in the cohort in 2020 and asked physicians about barriers to treatment in people who remained untreated.

The analysis looked at the current hepatitis C status of everyone in the cohort who had ever been tested for HCV antibodies and HCV RNA and had at least one clinic visit between 2000 and 2019. They also looked at uptake of direct-acting antivirals from October 2015, when the drugs became available to everyone with hepatitis C in the Netherlands, without restrictions.

"Almost all those who remained untreated had been diagnosed with hepatitis C prior to universal access to direct-acting antivirals."

Turning to treatment uptake, the researchers identified 979 people with chronic HCV infection who had attended an HIV clinic at least once from October 2015 and had at least six months of follow-up data, to allow for the opportunity to start and complete treatment. Just under 8% (72) remained untreated. A further four patients had not attempted treatment again after an unsuccessful attempt by the end of 2019.

People who inject drugs were significantly more likely to remain untreated. Nearly one in four who had chronic infection after direct-acting antivirals became widely available remained untreated at the end of 2019 and were between 12 and 15 times more likely to be untreated than gay and bisexual men (odds ratio 11.9 [95% confidence interval 4.4-32.4] for women; OR 14.9, [95% CI 7-33.3] for men).

People who were less engaged with HIV care were also more likely to remain untreated. An average visit frequency of less than once every seven months substantially increased the odds of remaining untreated compared to greater frequency of attendance (OR 17.1, 95% CI 8.3-36.6).

To investigate why people remained untreated, the investigators asked physicians to answer a questionnaire on their estimation of the barriers to treatment in each case. They found that by the end of 2020, only 29 of the 76 remained untreated and in care. Six had been cured of hepatitis C and the remaining 41 had either died, been lost to follow-up or moved abroad.

Physicians reported that the main barriers were patient refusal (21 cases), infrequent clinic attendance (19) and the absence of liver fibrosis (18). They estimated that sexual behaviour might pose a risk of onward hepatitis C transmission in two cases and drug use and sexual activity in one case. In three cases, insufficient adherence to treatment was expected while severe co-morbidities discouraged treatment in five cases.

Dr Isfordink noted that almost all those who remained untreated had been diagnosed with hepatitis C prior to universal access to direct-acting antivirals and that new cases of hepatitis C in cohort members have been diagnosed almost exclusively in gay and bisexual men, who have high treatment uptake. “The Netherlands is close to HCV micro-elimination in people living with HIV,” Dr Isfordink concluded.