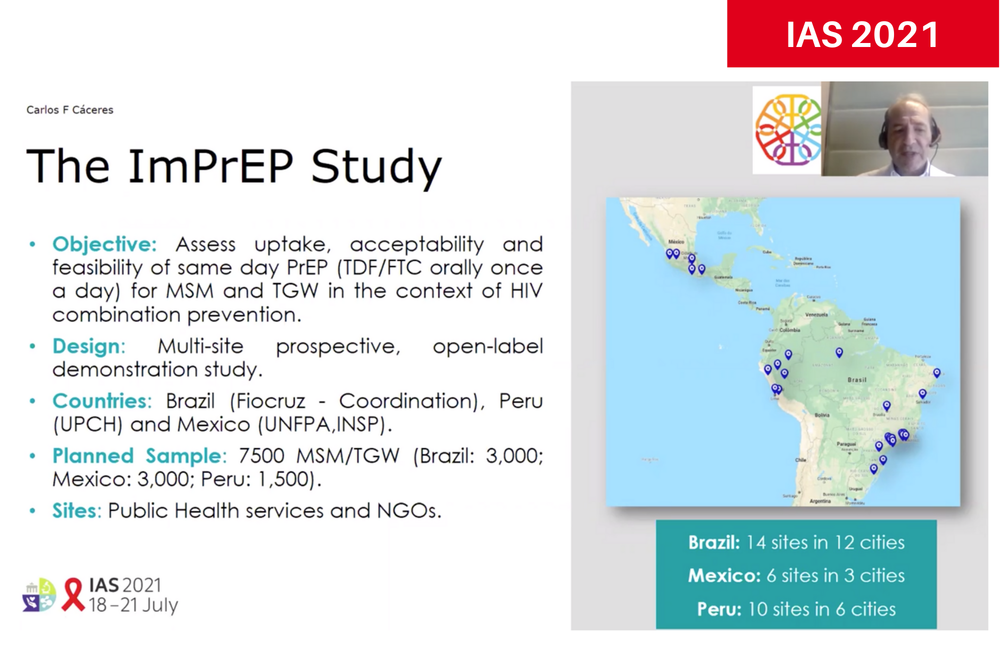 While PrEP users in Brazil and Mexico had low numbers of new HIV infections, there were a high number of breakthrough infections in Peru, according to updates from the large-scale Latin-American PrEP demonstration project, ImPrEP, presented to the 11th International AIDS Society Conference on HIV Science (IAS 2021) this week.

The ImPrEP study has been carried out in Brazil (14 sites in 12 cities), Peru (10 sites in 6 cities) and Mexico (10 sites in 6 cities) since 2018. While the main purpose is to look at PrEP uptake, adherence and the impact on HIV incidence among MSM and transgender women, additional analyses have investigated factors that predict who goes on to acquire HIV during the study (seroconversion) and barriers to accessing PrEP. The emerging findings are contributing to better understanding of the factors that enable successful PrEP uptake and adherence in these countries, and those that detract from the adoption of this highly effective HIV prevention tool.

All participants received a 30-day supply of PrEP and returned one month later for a safety visit. Subsequent visits (including prescription renewals, HIV testing and behavioural assessments) took place quarterly. Adherence was measured using a medication possession ratio – the number of pills prescribed divided by the days between visits, with a lower ratio indicating poorer adherence.

Transgender women did not have a greater risk seroconversion than MSM. There were no associations found between a history of STIs or being a sex worker and seroconversion.

Cáceres cited a few possible reasons for the high number of HIV infections in Peru, such as a higher proportion of young participants, more transgender women, lower levels of education, lower PrEP adherence and fewer who came specifically looking for PrEP. He also stated that the Peruvian public STI clinic sites tend to serve mainly female sex workers and lower income MSM and transgender women, in comparison with the sites in Brazil and Mexico, which tend to serve a broader array of key populations.

Cáceres concluded by stating that: “PrEP programme implementation should pay more direct attention to early indicators of programme failure and provide additional support to those who may experience such failures.”

A qualitative sub-study, led by Dr Jean Pierre Jirón Sosa from the Peruvian ImPrEP team, investigated barriers and challenges to PrEP adherence by looking at reasons for discontinuation in interviews with ten MSM and four trans women at three sites in Peru.

Those who discontinued PrEP tended to have multiple sexual partners and a low perceived HIV risk. Many of these participants engaged in sex work. As mentioned by Cáceres, these participants did not purposefully seek PrEP out, but instead were offered it when they attended STI clinics for testing or to get condoms. While some felt that PrEP allowed them the possibility of having sex without condoms, overall, they showed a distinct preference for condoms, based on the protection they gained against both HIV and STIs with just one method. This was despite reports of intermittent condom use.

PrEP-related difficulties included challenges with maintaining the daily regimen, using combined forms of prevention and overcoming side effects. PrEP use was described as circumstantial, based on specific sexual partners and whether sex was perceived to be risky.

Participants also cited social barriers, such as disclosing PrEP use to family, friends and partners; PrEP-related stigma (because of PrEP being mistaken for antiretroviral therapy); issues related to sexual identity; and broader HIV-related stigma.

Health providers could play an important role in supporting adherence. Participants mentioned that they were mostly satisfied with their interactions with healthcare providers but some reported instances of doubt and mistrust, especially related to how effective PrEP would be at preventing HIV infection.

Participants highlighted limited capacity at healthcare facilities as a structural barrier, especially as it pertained to the delivery of personalised PrEP services. There was also concern over potential breaches in confidentiality, as this could lead to discrimination based on sexual orientation and gender identity – a specific concern for the trans women interviewed.

What about event-driven PrEP?

A poster presentation by Dr Brenda Hoagland of the Fundação Oswaldo Cruz showed results from a sub-study on event-driven PrEP. A possible way of overcoming – or at least minimising – PrEP-related adherence difficulties is with event-driven PrEP: one pill taken two to 24 hours before sex, one 24 hours after the first dose and another 48 hours afterwards.

However, there was low awareness of this approach among 3764 MSM and trans women in all three countries, with those in Mexico being somewhat more aware (36%) than those in Brazil (30%) and Peru (28%). This sub-sample consisted largely of MSM (98%), with a median age of 31. Daily PrEP use was reported by 97% of the sample, while sex less than twice a week was reported by around a quarter.

After a brief explanation of event-driven PrEP, 27% of Mexican participants, 26% of Peruvian and 20% of Brazilian participants reported interest in switching to it. Among those not interested, comfort with daily PrEP (98%), concerns about the difficulty of the event-driven regimen (93%) and anxiety over HIV risk (91%) were cited as primary reasons.

Participants who had sex less than twice a week were more likely to be interested in event-driven PrEP. Significant reasons for interest in switching included: I know very well when I am going to have sex; I have little risk of getting HIV without daily PrEP and PrEP once a day seems to be very bad for my body.

The authors conclude by stating a positive takeaway in that those eligible for event-driven PrEP (based on infrequent sex) showed interest and considered it convenient. However, “beliefs about low efficacy and anxiety about HIV infection risk suggest that knowledge dissemination is necessary to increase interest in event-driven PrEP.”

Hoagland, B. Awareness of ED-PrEP and interest in switching from daily oral PrEP to ED-PrEP in Brazil, Peru and Mexico – the ImPrEP study. 11th IAS Conference on HIV Science, poster PEC301, 2021.