Big drop in incidence, despite low use of PrEP, because people used it when needed
Gus Cairns 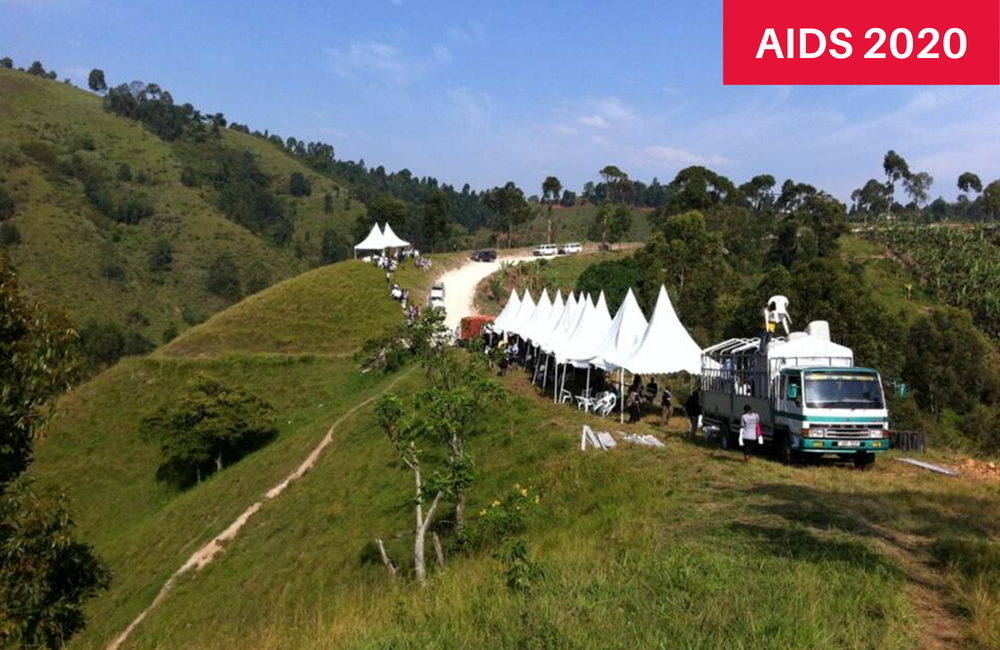 Image: A SEARCH health fair where PrEP was offered.

A large cluster-randomised study which offered intensified healthcare, including PrEP, to 16 communities in Kenya and Uganda has reported a 74% reduction in HIV infections in people at high risk of HIV infection who started to take PrEP. This is the most impressive reduction in HIV infections yet reported from a PrEP programme in sub-Saharan Africa. The results are being presented to the 23rd International AIDS Conference (AIDS 2020: Virtual) this weekend by Dr Catherine Koss of the University of California, San Francisco.

Since 2013, the SEARCH (Sustainable East Africa Research in Community Health) study has offered intensified healthcare, including universal HIV testing, antiretroviral therapy (ART) for those testing HIV positive and care for a number of other conditions such as diabetes and hypertension. During its first randomised phase it offered immediate HIV treatment to all testing positive in the 16 intervention communities, but only ART according to national criteria to 16 control communities. This phase achieved significant rises in the proportion of people who were virally suppressed, achieving the UNAIDS 90-90-90 target by 2015, and there was an overall 11% drop in mortality in the intervention communities compared with the control communities. However, there was no difference in HIV incidence between intervention and control communities, partly because changing guidelines meant that ART uptake was high in the control arm too.

From 2016 onwards ART has been offered to all testing positive, but continued with additional support to the 16 intervention communities, including targeted PrEP, targeted HIV testing, and targeted care interventions including via the ‘health fairs’ and home-visiting set up in the first phase.

SEARCH started offering PrEP in June 2016 to people at high risk living in intervention communities. An analysis of the numbers accepting PrEP and adhering to it, reported this March, made it look as if usage and therefore likely effectiveness was very low, with roughly 10% of those who were at elevated risk of HIV using enough PrEP for it to be consistently effective in preventing HIV. A qualitative study found that there was considerable interest in PrEP among young people, but a wide variety of opinions about it that varied by gender, and only a minority taking it.

It is therefore a considerable and encouraging surprise to find that even though PrEP has indeed been taken, at any one time, by less than 10% of the SEARCH population deemed to be at risk of HIV, it has produced a striking reduction in HIV incidence – and that, even more encouragingly, this was particularly the case in women.

How has this happened? The researchers found that the men and women were, as some PrEP studies have found in other populations, taking PrEP flexibly, as and when they saw themselves as being at risk, and not at other times.

The data are as follows. There were 74,541 participants in the intervention arm of the SEARCH study, of whom 15,632 (21%) were deemed, by the researchers or themselves, to be at high risk of HIV.

‘High risk’ means people in a serodifferent relationship or who had a high score in an algorithm that predicted high risk. This took into account age, sex, marital status, polygamy, education, alcohol consumption, male circumcision and working in an occupation associated with high HIV incidence: transport, fishing or bar work. But participants could also judge themselves as being at high risk and were able to access PrEP without having to say what those risks were.

Of these 15,632 participants, 5447 (35%) started PrEP and 4260 (27%) took at least one HIV test after starting PrEP. Testing and PrEP refill appointments were made every 12 weeks, and conducted in a variety of settings: in homes, clinics and people’s places of work, including bars and beaches on Lake Victoria.

Those taking PrEP were roughly 50/50 men and women, had a median age of 30, 19% were in a serodifferent relationship and about 22% were in one of the high-risk occupations.

PrEP retention and adherence looks poor when the figures for all who started PrEP are given. At the first appointment four weeks after starting PrEP, 65% of people initially given PrEP re-attended, 52% refilled their PrEP prescription, and the self-reported adherence rate was 42% (participants were told to take PrEP daily, so this was meant PrEP was taken on 42% of days).

At the 60-week mark (about 14 months), 54% re-attended an appointment, 33% refilled their prescription, and self-reported adherence was 27%.

However, these figures are transformed if PrEP refills and adherence are considered as a proportion only of those who said they were at risk of HIV at the time.

It is important to emphasise that those “at current risk” were not the same people at each appointment. One crucial finding, emphasised by Catherine Koss, was that although 83% of participants who started PrEP stopped it at some point, 50% of those who stopped later restarted it.

There was a total of 7150 person-years of follow-up among the 5447 people who started PrEP. In this group, 25 people tested positive for HIV. They were offered same-day ART; blood samples were taken for viral load and resistance testing; and hair samples were taken from those who said their adherence had been good, to test for drug levels.

Because there was no placebo arm to compare with, the PrEP users were compared with historical controls – participants in SEARCH from the two years prior to PrEP starting (2015-2017), who were matched to the PrEP starters in terms of demographic and risk factors.

Among these historical controls, annual HIV incidence was 0.92%, with a considerable difference between women (1.52%) and men (0.40%).

Of the 25 people who tested HIV positive, 17 (68%) were women, 56% were below 30 years old, 36% had an HIV-positive regular partner. All but one (96%) started ART, two-thirds of them on the day of diagnosis. Of those, 22% had at least one repeat viral load test after starting ART (three could not be traced) and all but one of them achieved viral suppression.

The person who did not achieve viral suppression turned out to be the only person with drug-resistant HIV: she had NNRTI and NRTI resistance mutations, probably acquired from the person who infected her, but also the lamivudine/emtricitabine resistance mutation M184V, which may have arisen while she was taking PrEP. She was placed on a second-line regimen and her viral load results are awaited.

Eighteen of the 25 seroconverters said they had not taken PrEP in the 70 days before testing HIV positive. Of the other seven, five had tenofovir levels suggesting they had been taking it 4-6 days a week, one 7 days a week and one person had no hair sample available. But four of the seven reported patchy adherence over the last 3-4 months (hair samples cannot pick up rapid changes in adherence), and two tested positive at the week 4 visit, so may have had acute HIV when starting PrEP.

The other one of the seven, and the only one with drug levels suggesting daily dosing, was the woman with drug resistance. She told the researchers that she had taken PrEP daily for the last 12 weeks, but had not taken it at all for the 24 weeks before that. She had alternated periods of full adherence with periods of not using PrEP at all over two years, and may have had an HIV exposure just after re-starting.

“These results”, Catherine Koss told the conference, “provide evidence that in generalised epidemic settings, offering universal access to PrEP – including to individuals outside of known risk groups – can reduce HIV incidence.”

The entire SEARCH study is closing this month, and forthcoming figures will show how much effect PrEP had in reducing HIV incidence among the group as a whole, whether or not they were offered it.

Koss C A et al. Lower than expected HIV incidence among men and women at elevated HIV risk in a population-based PrEP study in rural Kenya and Uganda: Interim results from the SEARCH study. 23rd International AIDS Conference, abstract no 875, 2020.