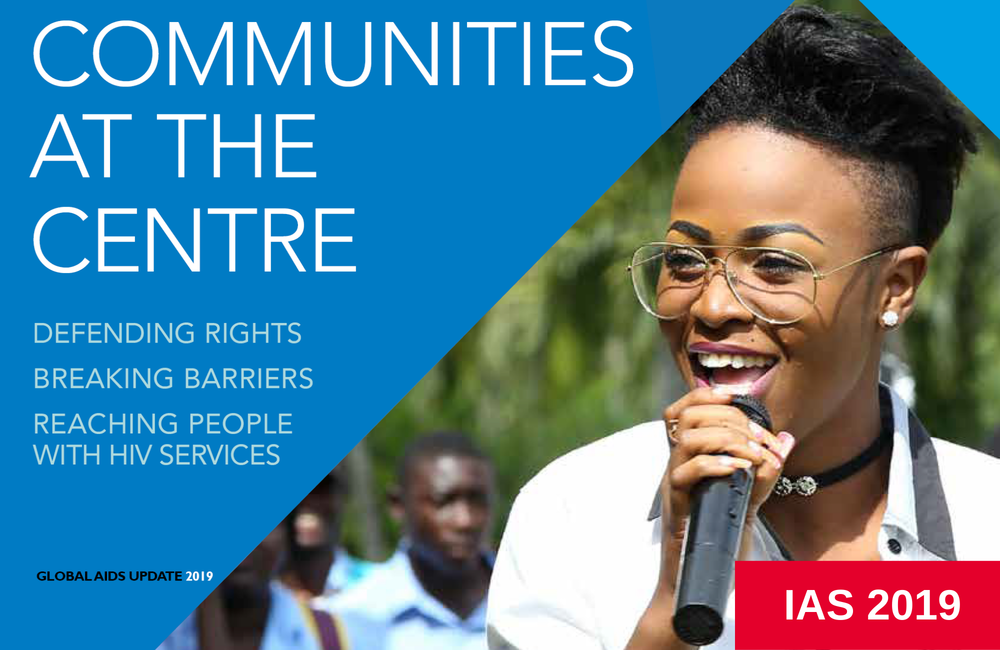 The Joint United Nations Programme on HIV/AIDS (UNAIDS) released its latest report on the status of the HIV epidemic and the global response ahead of the 10th International AIDS Society Conference on HIV Science (IAS 2019), taking place this week in Mexico City.

The report highlights the impact community programmes have had in successfully expanding access to HIV treatment, supporting adherence and preventing new infections. However, it also shows that this progress is slowing and has been uneven, and that global funding for the HIV/AIDS response has fallen for the first time.

Some countries are meeting or exceeding the UNAIDS 90-90-90 targets – 90% of people living with HIV knowing their status, 90% of those diagnosed being on antiretroviral therapy and 90% of those on treatment having viral suppression by 2020 – while others are falling behind.

Globally, new infections and AIDS-related deaths continue to decline, but less steeply than before. At the same time, the number of people on HIV treatment continues to rise and appears on track to meet the 2020 target. According to UNAIDS global estimates, in 2018:

This represents a 16% drop in new infections since 2010, with most of the progress seen in Eastern and Southern Africa. But incidence has increased in some regions including Eastern Europe and Central Asia (up 29%), the Middle East and North Africa (up 10%) and Latin America (up 7%).

The report shows that members of key populations and their sexual partners now account for more than half (54%) of the 1.7 million people who newly acquired HIV in 2018. These groups include men who have sex with men, transgender people, sex workers, people who inject drugs and and prisoners. In Eastern Europe and Central Asia and in the Middle East and North Africa, these populations are thought to account for 95% of new infections. Here too, the distribution of who bears the brunt of the epidemic varies widely by region.

Despite the availability of antiretrovirals that can prevent mother-to-child HIV transmission, just 82% of pregnant women have access to them, resulting in 160,000 new infections among children – well short of the target of less than 40,000.

Regarding HIV prevention, the report says that only around 300,000 people worldwide – including 130,000 in the US – are using pre-exposure prophylaxis (PrEP), although this is at best a rough estimate. Similarly, although people who inject drugs account for a high proportion of new HIV infections in some regions, many lack access to adequate harm reduction services.

Although it is harder to gauge progress in this area, the report notes that stigma, discrimination, criminalisation, harassment and violence remain problems for many people living with HIV.

In the face of this continued need, the gap between needs and available resources is widening, according to the report. Global funding for the HIV/AIDS response declined for the first time, by nearly US$1 billion, as international donors provided less and domestic investment did not keep up. Nonetheless, in 2018, more than half of all funding in low- and middle-income countries came from domestic sources. In 2018, US$19 billion was available for the response, falling US$7.2 billion short of the estimated US$26.2 billion needed by 2020.

Adults with HIV are approaching the global target of 95% viral suppression, but there is much slower progress among children and adolescents, a study published in Lancet HIV reported. According to the retrospective cohort study, significant efforts are needed to reach the viral suppression target for children and adolescents.
American Journal of Managed Care
13 Dec 21
Global health targets

In December 2021, countries in the African region reported 87% of people living with HIV know their status, of those 77% are on treatment and 68% have low viral load. So far only nine countries are on track to reach the 95-95-95 targets by 2025.
World Health Organization
6 Dec 21
Global health targets

Matthew Hodson, Executive Director of NAM aidsmap, shares insights into how the United Kingdom has managed to meet and surpass the 90–90–90 targets to address the AIDS epidemic, initially set by the Joint United Nations Programme on HIV/AIDS (UNAIDS) for 2020.
WHO Europe
1 Dec 21
Government, leadership & policy

Statement: response to Government HIV Action Plan: A step in the right direction, but more to do

We warmly welcome the publication today of the Government’s new HIV Action Plan, including the first significant new funding for HIV testing in nearly a decade. The important new commitments are all a substantial step in the right direction but won’t be enough on its own to end HIV transmission by 2030.
National AIDS Trust
1 Dec 21
Treatment outcomes & life expectancy