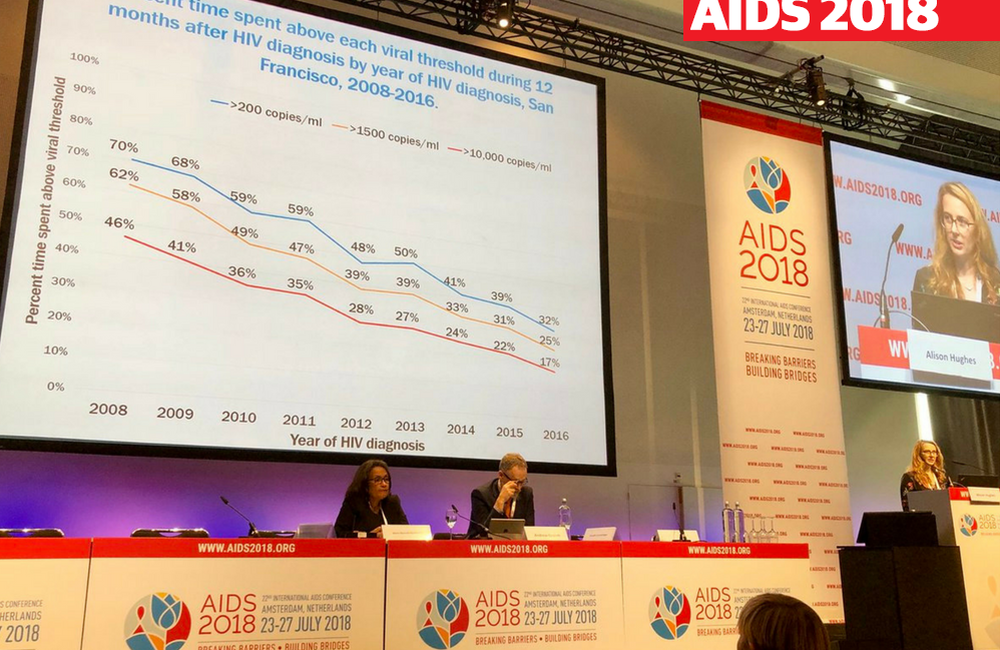 More rapid initiation of treatment after diagnosis – and the shortening of the period with detectable viral load – has coincided with substantial declines in new HIV diagnoses in San Francisco and Melbourne, research groups from the two cities reported on Tuesday at the 22nd International AIDS Conference (AIDS 2018) in Amsterdam.

In theory, reducing the period during which people have a detectable viral load should reduce the period during which people can pass on HIV to partners and so reduce the number of new HIV diagnoses. Although the World Health Organization and some national guidelines recommend same-day or very rapid treatment initiation after diagnosis, health systems are adapting at varying speeds to the new paradigm.

Two cities where rapid treatment initiation is now the norm – San Francisco and Melbourne – reported on the impact of rapid treatment on new HIV diagnoses and, in the case of Melbourne, also highlighted the need for greater attention to improving HIV testing frequency.

Using the city’s HIV surveillance registry, the investigators included everyone diagnosed with HIV between 2008 and 2016 who had at least two viral load test results in the first year after diagnosis.

Using these data, they calculated what proportion of the first year after diagnosis was spent with a viral load above 200 copies/ml, above 1500 copies/ml or above 10,000 copies/ml.

Twenty-four per cent of those diagnosed had no recorded antiretroviral therapy after diagnosis and 20% took between three months and one year to start. The remainder started treatment within three months of diagnosis.

In 2010, the San Francisco Department of Public Health introduced a policy of offering treatment immediately after diagnosis.

Multivariate analysis showed that MSM who inject drugs, the homeless and, unsurprisingly, people who started treatment more than three months after diagnosis all had longer durations of detectable viral load (> 200 copies/ml). Young people aged 25 to 29 also had a slightly higher risk of more prolonged detectable viremia. The study found no racial differences in duration of detectable viremia.

Australia is a low HIV prevalence country with an epidemic that is highly concentrated in gay and bisexual men, especially in its two largest cities, Sydney and Melbourne. Professor Mark Stoové of the Burnet Institute, Melbourne, presented results from an analysis of anonymised surveillance data that can link an individual’s episodes of medical care and laboratory tests over time by use of an encrypted unique identifier. This allows the surveillance project to track re-testing and calculate the interval between tests, as well as monitoring the interval between treatment initiation and the first undetectable viral load result.

In Melbourne, approximately 300 people were diagnosed with HIV in 2017, three-quarters of them gay and bisexual men. Melbourne is a UNAIDS Fast Track City, aiming for 90% viral suppression among diagnosed people with HIV on treatment by 2020. Between 2012 and 2017, 292 gay and bisexual men were diagnosed with HIV and the percentage with undetectable viral loads within twelve months of diagnosis increased from 59% to 97% (p<0.001).

An analysis of men attending four sexual health services in Melbourne found that although re-testing within 12 months, 6 months or 3 months increased between 2012 and 2017, this was almost entirely attributable to the state of Victoria PrEP (pre-exposure prophylaxis) demonstration project; when people not seeking PrEP were excluded, re-analysis found no significant improvement for any frequent testing intervals.

Nevertheless, new HIV diagnoses began to decline sharply after 2014, corresponding with a decline in the interval between diagnosis and undetectable viral load from 98 days to 49 days between 2014 and 2016.

Stoové highlighted the need for access to self-testing in Australia and the offer of testing outside settings offering sexual health services, to reach a larger population of gay and bisexual men.

The two studies presented today provide rigorous measurement of various indicators of rapid treatment initiation and viral suppression and, in the case of Melbourne, identify ongoing weakness in the uptake of HIV testing among men not seeking PrEP. Broadening the mix of HIV testing opportunities to embrace HIV self-testing and a wider range of non-specialist providers will be critical for Australia, just as for many other higher-income countries.