PrEP does not lower feminising hormone level in transgender women 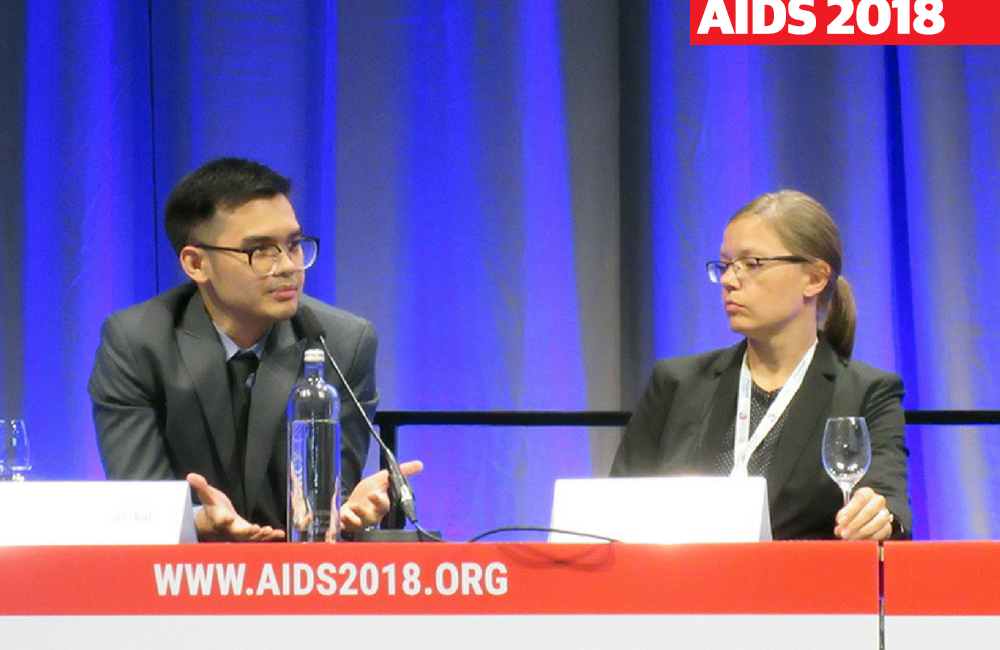 Using Truvada (tenofovir DF/emtricitabine) for HIV prevention does not lower levels of feminising hormones, offering reassurance for transgender women who are concerned about drug interactions, according to a presentation at the 22nd International AIDS Conference (AIDS 2018) in Amsterdam.

Tenofovir levels in the blood were reduced by 13% in trans women who used estradiol, but remained above the level shown to confer protection, Akarin Hiransuthikul of the Thai Red Cross AIDS Research Centre said during a press briefing yesterday.

Some prior studies have shown that blood concentrations of PrEP (pre-exposure prophylaxis) drugs in trans women were lower than expected. This could occur either because feminising hormones interact in a way that reduces drug levels or because trans women have poorer adherence. The latter may occur because trans women are worried that PrEP could affect their hormone therapy, which they prioritise over HIV prevention, Hiransuthikul said.

A study presented at the International AIDS Society Conference on HIV Science last year found that some trans women living with HIV are hesitant to use antiretroviral therapy or do not take it as prescribed because of concerns about drug interactions with their hormone therapy. The same may be true of PrEP.

An analysis of data from the pivotal iPrEx trial showed that Truvada PrEP appears to work well for transgender women, but only if they use it consistently. Studies of cisgender (non-trans) women suggest that they may need to take PrEP more consistently than men to achieve a similar level of protection.

Hiransuthikul and colleagues conducted a pharmacokinetic study of potential drug-drug interactions between feminising hormone therapy and PrEP. The iFACT study enrolled 20 HIV-negative trans women who still had intact testicles and had not received injectable hormones within the past six months. They were in their early- to mid-twenties and had normal body weight and kidney function.

At the start of the study, the participants started a feminising hormone therapy regimen of estradiol valerate (2 mg/day), a form of the female hormone oestrogen, plus the androgen blocker cyproterone acetate (25 mg/day). Hiransuthikul stressed that feminising hormone regimens vary in different countries and these results are only applicable to this particular regimen.

At week 3, the women started taking Truvada. At week 5, they stopped the hormone regimen so the researchers could compare PrEP drug levels on and off hormones, resuming at week 8. They then continued on both hormones and PrEP through week 15.

The study showed that concurrent use of hormone therapy and PrEP did not affect hormone levels. Comparing levels at week 3 (before starting PrEP) and week 5 (while on PrEP), the researchers saw no significant differences in maximum estradiol levels, estradiol levels 24 hours after dosing, estradiol half-life (how long it lasts in the body) or area under the curve, a measure of total drug exposure over 24 hours. They also saw no changes in testosterone concentrations. They therefore concluded that PrEP did not significantly affect levels of feminising hormones.

However, looking at the effect of feminising hormones on tenofovir, they found that tenofovir levels at 24 hours after dosing and tenofovir total exposure was about 13% lower in the presence of estradiol. The study did not measure emtricitabine levels.

This difference was statistically significant, but Hiransuthikul emphasised that its clinical implications for PrEP efficacy are not clear. Even with this reduction, the mean tenofovir level was still above the target level shown to confer protection in previous studies. He also noted that it is not known whether this difference in blood levels correlates with tenofovir levels in rectal tissue, where HIV exposure typically occurs.

"These results provide reassurance that you can use PrEP without fear that it will decrease hormones to a suboptimal level," Hiransuthikul concluded.

In a related study, Mackenzie Cottrell of the University of North Carolina Eshelman School of Pharmacy and colleagues compared tenofovir DF/emtricitabine pharmacology in HIV-positive transgender and cisgender women on suppressive antiretroviral therapy.

The researchers measured levels of TFVdp and dATP, and the ratio between them, as well as emtricitabine triphosphate (FTCtp) and its competing nucleotide dCTP, in blood, peripheral blood mononuclear cells (PBMCs) and rectal tissue samples. The study showed no differences in drug metabolite levels in the blood plasma or PBMCs, so the report focused on rectal tissue levels.

There, the TFVdp:dATP ratio was about 8-fold lower in transgender women compared with cisgender women, Cottrell reported. That is, the level of TFVdp relative to dATP was significantly lower in trans women and decreased as estradiol levels increased. One of the trans women had a ratio below the EC90, the target concentration considered to be 90% effective. However, lower TFVdp:dATP ratios were not associated with higher levels of HIV RNA or DNA in rectal tissue, indicating that they did not compromise viral suppression.

Emtricitabine ratios did not differ between the groups and were above the EC90 target for all participants.

These data confirm prior laboratory findings and "suggest that feminising estradiol may impact PrEP efficacy," the researchers concluded.

Asked about the implications of these findings, Cottrell said we still need more data on HIV-negative trans women taking antiretrovirals for HIV prevention to see if they might be at risk during periods of lower adherence.

Studies show that PrEP taken four times a week – and perhaps even less often – is effective for cisgender men who have sex with men. However, until more data are available, "it's fair to share with trans women that there are still uncertainties and it might be better to take it daily," Cottrell recommended.