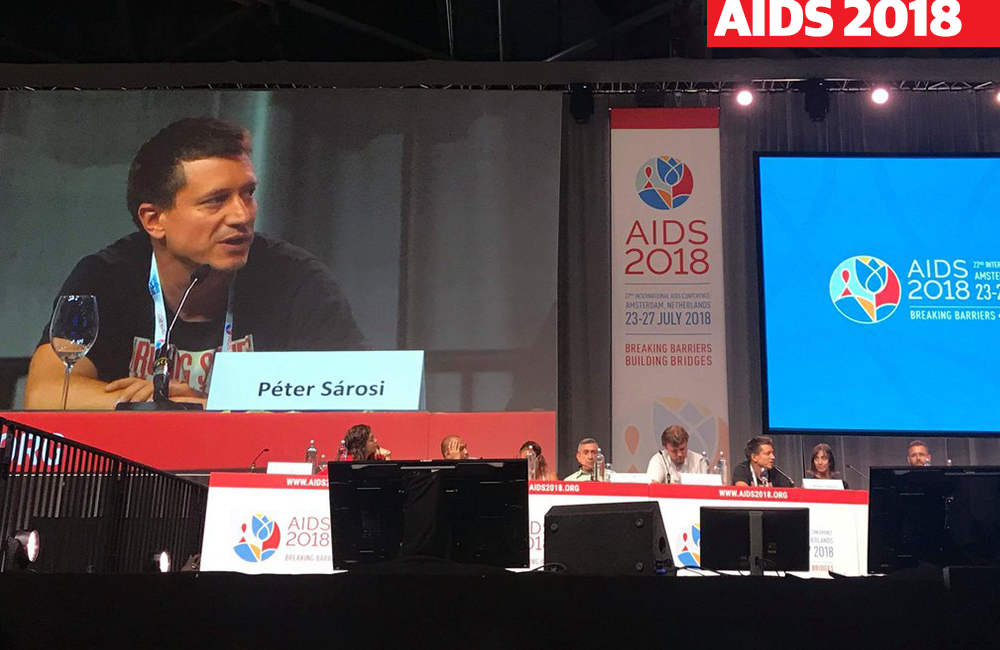 Civil society organisations (CSOs) providing HIV services and advocacy to key populations and people living with HIV are increasingly under attack from populist and repressive government regimes across the world, delegates to the 22nd International AIDS Conference (AIDS 2018) in Amsterdam heard on Wednesday.

Speakers from Hungary, Russia, Venezuela, Kenya and the Philippines outlined ways in which they were facing not just financial cutbacks but government interference in their attempts to tackle HIV and support men who have sex with men (MSM), people who use drugs, sex workers and other vulnerable populations. Their stories, while both alarming and concerning, also gave suggestions for how CSOs might manage such situations and maintain their presence.

Peter Sarosi of Rights Reporter Foundation, Hungary, spoke of the rapid reductions in civil liberties under the Orbán regime in Hungary. Both there and in Russia and Kenya, CSOs receiving external donor funding are required to register as 'foreign agents', which carries a social stigma and discourages others from collaborating with them. Currently nine Hungarian CSOs are challenging this at the European Court of Human Rights.

The Hungarian drugs strategy no longer supports harm reduction and the two main needle exchanges in Budapest have been forced to close, reducing injecting equipment access by 55%. Helping migrants and refugees is now criminalised, despite there not being particularly large numbers of migrants.

In response, agencies affected have increased internal collaboration and social media engagement to get their case across. They had found human stories of people affected by the changes particularly effective in countering government propaganda.

Ivan Varentsov of the Eurasian Harm Reduction Association outlined the Russian experience in recent years. He noted that the Eastern Europe and Central Asia (EECA) region is the only one where the epidemic is still growing, and that UNAIDS figures show Russia accounts for 81% of all new infections there. Approximately 70% of these are amongst people who use drugs and treatment coverage is only 35%. There is no government support for any form of harm reduction.

Russia's foreign agent law was enacted in 2012 and requires listed organisations to label all publications as from foreign agents. Since 2016 ten non-governmental organisations (NGOs) working in HIV prevention listed as foreign agents, mainly for advocating opioid substitution therapy which is against national policy. Like Hungary, they are challenging this at the European Court of Human Rights although Russia now threatens to withdraw from it.

Another difficulty he cited was the sense that registered NGOs were constantly under threat of being fined for minor infractions. “The law is like a hammer hanging over you and you never know when it will fall on you” he said.

Alberto Nieves of Acción Ciudadana Contra el SIDA described a rather different situation in Venezuela, where the country is facing a complex emergency of political and economic origin. It has gone from having the best HIV treatment programme in Latin America to having none, leaving people with HIV at risk of death. The executive branch of government has effectively taken over from the elected politicians; wages could not meet inflation, crime is high and the health system is in chaos. The National Guard have broken up demonstrations by people with chronic diseases. Many people with HIV have left the country and it is a humanitarian crisis in progress.

Jonas Bagas of APCASO described yet another crisis, in the Philippines since the advent of the Duterte government and a declaration of a war on drugs. Official figures show that 4251 people have been killed in official encounters with police while a further 16,355 killings associated with drugs are being investigated. The Chair of the Commission on Human Rights has been jailed and the Chief Justice dismissed, while attacks on journalists, priests and local government officials were common.

The Philippines faces an exploding HIV epidemic with 79% of all cases reported since 2013; however, almost 80% of these are amongst MSM and only 4% amongst people using drugs. Nevertheless, government funding is directed at the “war on drugs” which has become a key plank of the President's consolidation of power.

NGOs working with both people who use drugs and people living with HIV are responding by documenting human rights violations while trying to maintain harm reduction services. They have sympathetic lawyers working with the legal community to sensitise them to the issues.

Saoyo Tabitha Griffith, a lawyer, described a situation in Kenya which had echoes of the stories from Eastern and Central Europe. Like those examples, Kenyan CSOs cannot operate unless they are registered and since 2014 some 510 have been deregistered with a further 957 threatened. The explanations given have cited terrorism, tax evasion or misappropriation of funds but this has included some of the key HIV and human rights groups.

Some groups have fought their deregistration, she said, but “you end up spending more time fighting deregulation than doing the job you're meant to do”. Organisations face raids, often linked to their work at sensitive times, such as an election monitoring group which was raided shortly after drawing attention to irregularities in the general election.

Others, particularly LGBT organisations, have been refused registration at all and have had to take to the courts to invoke the Constitution which allows freedom of association. The government has also tried unsuccessfully to take control of all external donor funding through a central agency which they would control, and to further restrict foreign funding.

To defend Kenyan CSOs, international scrutiny had been helpful, particularly from the UN. Key actions to defend organisational existence were described as:

In closing, Shaun Mellors of International HIV/AIDS Alliance pointed out that the President of the United States, the proposed venue of the 2020 International AIDS Conference, is a friend and admirer of at least two of the rulers of the countries represented in the session, Putin and Duterte. He asked the conference organisers to consider what message that sent to community delegates.

Trial over killing of HIV activist begins in Greece

Three years after a prominent Greek-American HIV activist was beaten to death in Athens, six people will appear in court on Wednesday in what Greece's LGBTQ community sees as an important trial for gay rights in the country.
FRANCE 24
20 Oct 21
Men who have sex with men (MSM)

From injections to electric shocks, prayer to rape, myriad methods are peddled by medics, counsellors and moralists to try and change or suppress the sexual desire or gender identity of LGBT+ people. Interviews with practitioners and people who have been through conversion therapy reveal a deep divergence over practices that dozens of medical associations have condemned as ineffective and harmful.
Thomson Reuters Foundation
20 Sep 21
Government, leadership & policy

At a June UNGA high-level meeting on HIV/AIDS, Russia refused to support a consensus political declaration on ending the epidemic, forcing the first contested vote on this topic. What does this swerve toward greater politicization mean for the future of HIV/AIDS and international politics?
Washington Post
14 Sep 21
Discrimination & the law

Uganda’s president Yoweri Museveni has rejected a bill that would have doubled down on the country’s already scathingly anti-LGBT+ laws.
Pink News
21 Aug 21
Activism & civil society

From a humble start, Romania's Association against AIDS expands beyond the HIV space

The Romanian Association Against AIDS was founded on April 10, 1992, just 3 years after the fall of communism, making it the first such organization in the country following a time when HIV was not officially acknowledged nor prevention of HIV and sexually transmitted infections discussed.
American Journal of Managed Care
21 Aug 21
More editors' picks