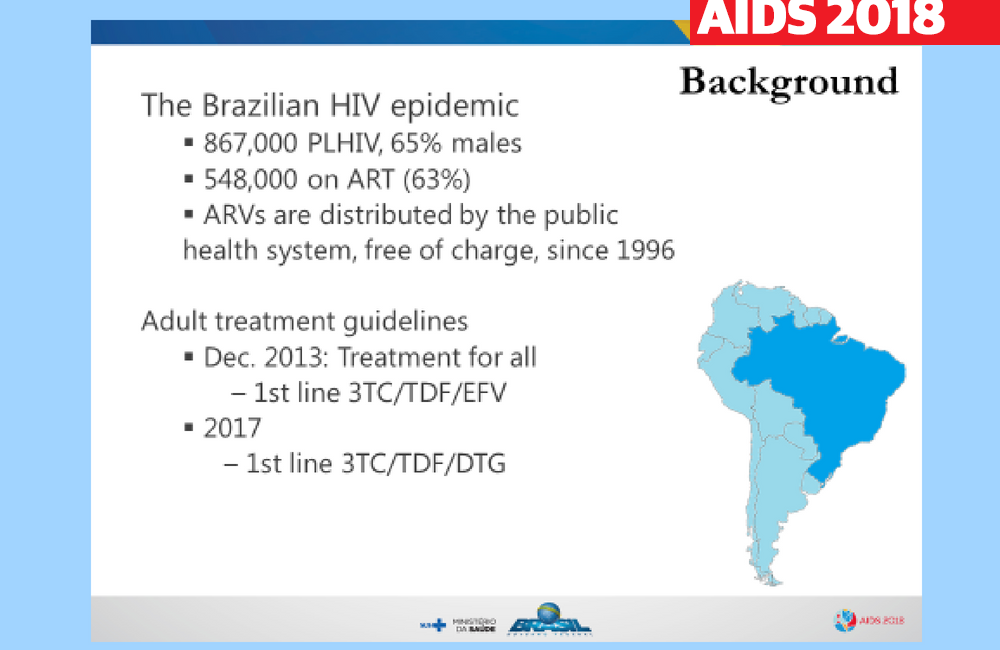 People receiving dolutegravir-based antiretroviral treatment in Brazil’s national treatment programme were far more likely to have a fully suppressed viral load six months after starting treatment, according to a review of all patients who started treatment between 2014 and 2017 presented on Tuesday at the 22nd International AIDS Conference (AIDS 2018) in Amsterdam.

Brazil’s national treatment programme was one of the first in a middle-income setting to adopt dolutegravir-based treatment as the preferred option for first-line therapy, in early 2017. Dolutegravir is an integrase inhibitor with a high barrier to resistance. The drug is well tolerated in the vast majority of people.

As a consequence of a deal between the Medicines Patent Pool and ViiV Healthcare, dolutegravir is available in 92 lower-income countries as part of a three-drug combination for approximately $75 a year. Brazil’s government agreed a price of approximately $500 a year with ViiV Healthcare in October 2016 and negotiated a further discount in 2018.

To assess the efficacy of dolutegravir relative to other drugs used in first-line treatment in its national programme, Brazil’s Ministry of Health carried out an analysis of viral suppression six months after starting treatment in 103,240 people who began treatment between January 2014 and July 2017.

A multivariate analysis which controlled for demographic factors, baseline CD4 count and viral load showed that, when compared to people who started treatment with dolutegravir, people who received dolutegravir with tenofovir and lamivudine were 42% more likely to have an undetectable viral load (< 50 copies/ml) six months after starting treatment than people receiving efavirenz with tenofovir and lamivudine (aOR 1.42, 95% CI 1.32-1.52).

Those who started treatment with protease inhibitor-based regimens – either lopinavir/ritonavir or atazanavir/ritonavir – were around 40% less likely to achieve an undetectable viral load than people receiving tenofovir, lamivudine and efavirenz, six months after starting treatment.

"The initiation of ART at this very early stage leads to a drastic decrease in the size of viral reservoirs by clearing large pools of infected cells harboured in gut-associated lymphoid tissues and lymph nodes, which are known to be preferential sites for HIV persistence during ART," said Dr. Nicolas Chomont, a CRCHUM researcher and a professor at Université de Montréal.
EurekAlert
5 Mar 20
More editors' picks