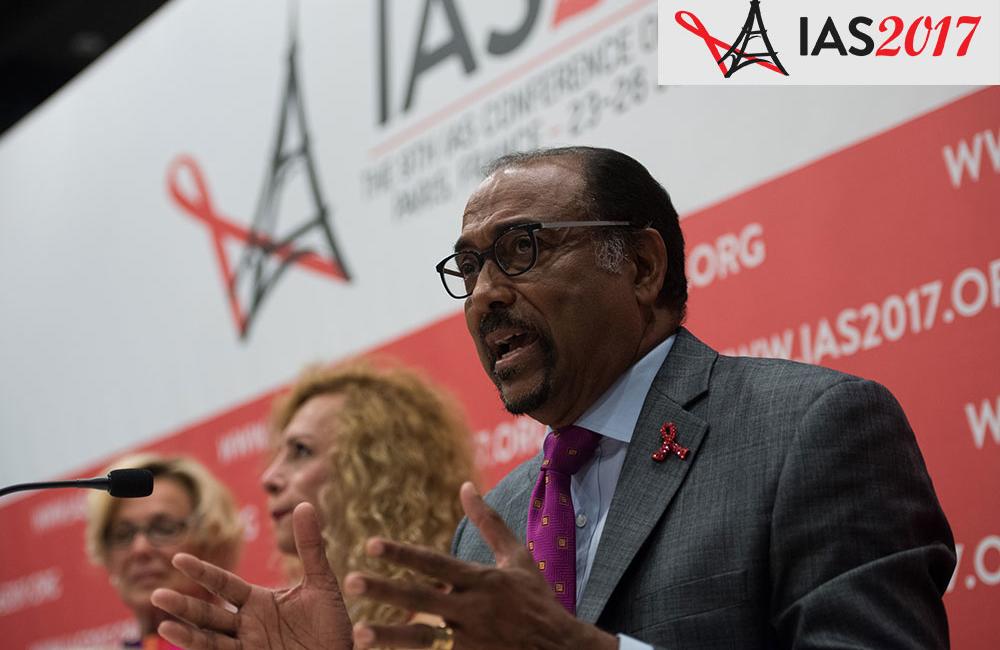 The world is on track to reach global targets for reducing AIDS deaths and HIV treatment access by 2020, but some regions of the world risk falling further behind due to lack of political commitment, UNAIDS announced in the run-up to the 9th International AIDS Society Conference on HIV Science (IAS 2017), which opened today in Paris.

More than half of all people living with HIV (53%) now have access to HIV treatment and AIDS-related deaths have almost halved since 2005, UNAIDS reports in Ending AIDS: progress towards the 90-90-90 targets.

The 90-90-90 targets endorsed by governments in 2014 call for 90% of people to know their HIV status, 90% of people with diagnosed HIV infection on treatment, and 90% of people on treatment to be virally suppressed. If all these targets can be met, AIDS deaths can be cut dramatically and new infections will begin to fall.

Past the tipping point

The world has passed a tipping point in progress towards the 90-90-90 targets, UNAIDS Executive Director Michel Sidibé said.

The report shows that in 2016, 70% of people living with HIV knew their HIV status. Of the people who know their status, 77% were accessing treatment, and of the people on treatment, 82% were virally supressed. In lower- and middle-income countries, progress towards achieving the targets has been especially strong in Cambodia and Botswana, which have already reached the 90-90-90 goals.

Eastern and southern Africa has also made good progress and the region is on course to reach the 90-90-90 targets. Seventy-six per cent of people living with HIV know their HIV status, 79% of people who know their HIV-positive status have access to antiretroviral therapy and 83% of people who are on treatment have undetectable levels of HIV – this equates to 50% of all people living with HIV in Eastern and Southern Africa with viral suppression.

The sharpest reduction in deaths has been seen in Eastern and Southern Africa – a 62% fall since 2004. Deaths have fallen by 52% in the Caribbean and 39% in the Asia-Pacific region but risen by 48% in the Middle East and North Africa and by 38% in Eastern Europe and Central Asia.

Deaths were 27% lower among women and girls than among men and boys due to better rates of diagnosis and earlier treatment.

UNAIDS says that the new estimates for 2016 should be more accurate because more countries are producing better-quality data, especially in Eastern and Southern Africa. Independent door-to-door surveys in several countries in the region, Population Health Impact Assessments, have fed into these estimates, giving confidence that the changes seen in the region are real.

The countries that have made the best progress all show strong political commitment to achieving the 90-90-90 targets, speakers at the 90-90-90 Targets Workshop agreed. The workshop, sponsored by UNAIDS and the International Association of Providers in AIDS Care (IAPAC), took place immediately prior to the opening of IAS 2017.

Least progress towards the targets has been made in Eastern Europe and Central Asia where 63% of people living with HIV know their HIV status but only 43% of those diagnosed are on treatment. Seventy-seven per cent of people on treatment are virally suppressed in this region. Furthermore, new infections have continued to rise in the region even as new infections continue to decline by 29% in Eastern and Southern Africa between 2010 and 2016.

Even fewer people living with HIV know their status in Western and Central Africa: just 42% of people have been diagnosed in this region according to UNAIDS, and of these 83% are on treatment and 73% are virally suppressed.

Dr Debbie Birx, US Global AIDS Coordinator, said that Western and Central Africa had received the highest rate of investment but showed the least success in diagnosing and bringing people onto treatment. She blamed the persistence of formal and informal fees – effectively, tips or gratuities to salaried individuals to obtain medical attention – for the low rates of diagnosis and treatment.

“I think that policy is key. Our money can’t work if we don’t have the policies to make it work. We need to eliminate all clinical and informal fees. I’ve seen fees charged for what we provide for free,” she said.

Another factor determining regional success is the way that services are delivered, argued Dr Badara Samb of UNAIDS. “What is characteristic of health service delivery in eastern and southern Africa? It relies heavily on good community health systems and community health workers,” he told the 90-90-90 Targets Workshop.

UNAIDS won the endorsement of African heads of government at a recent African Union summit for an ambitious plan to recruit, train and put to work 2 million extra community health care workers at a cost of $4-$6 billion a year. UNAIDS calculates that this expenditure will result in a return on investment of $21.75 billion a year from healthcare savings, disease reduction and expanded employment.