New guidance says start HIV treatment within 7 days of diagnosis – but is everyone ready? 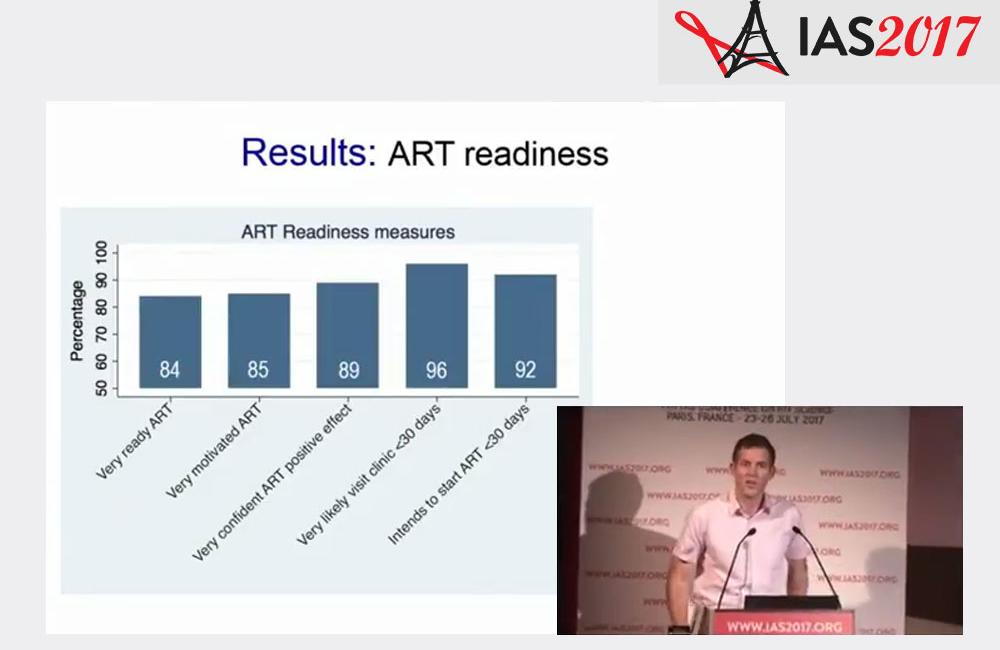 The new guidance was issued on the opening day of the 9th International AIDS Society Conference on HIV Science (IAS 2017) in Paris.

WHO's recommendation is based on the findings of a study conducted in Haiti, presented at the AIDS 2016 conference, which showed that people who started treatment on the day of HIV diagnosis were more likely to be retained in care and more likely to be virally suppressed a year later.

But, two studies presented on Monday at the conference highlight the need for better preparation of people who start treatment very quickly after diagnosis. The studies also highlight the need for research to identify better ways of screening for patients who are going to struggle with treatment, even if they accept an offer of a rapid start.

However, the study also found that once people had been on treatment for at least a month their risk of being lost to follow-up began to fall sharply, and possession of a mobile phone also greatly reduced the risk of loss to follow-up.

A second study, carried out in Cape Town, found that readiness to start treatment immediately was associated with a better knowledge of antiretroviral therapy (ART) and knowing someone who had already experienced the positive health benefits of ART. People who were surprised by their diagnosis or who were otherwise healthy were around 55% less likely to consider themselves ready and motivated to start treatment.

Just under two-thirds of the cohort were women (64.7%) and had a median CD4 cell count of 373 cells/mm3 at the time they started treatment. Fifteen per cent already had symptomatic HIV disease (WHO stage 3/4).

Fifty-five people were lost to care by December 2014, a cumulative incidence of 8.48% 12 months after starting treatment.

Presenter Julius Kiwanuka of AIDS Healthcare Foundation Uganda said that when the data were reanalysed to check if starting a few days after diagnosis instead of on the same day made a difference, they still found that starting within a week of diagnosis was associated with a higher risk of loss to follow-up than deferred treatment.

"'Steep' ART initiation should be backed up by intensive pre-ART counselling," Julius Kiwanuka concluded. But is this necessary for everyone, and are there ways of distinguishing which patients might need more intensive support?

The Cape Town study looked at factors associated with readiness in 87 people referred from a mobile health clinic to an ART clinic after HIV diagnosis. Approximately two-thirds were women and half were in good health with no HIV-related symptoms.

Although most participants were ready to start ART on all measures, 28% reported some uncertainty regarding ART initiation.

Readiness was greater among those who already had good knowledge about ART (aOR:4.31, p < 0.05) and among those who knew someone who had already experienced positive health effects of ART (aOR:2.65, p < 0.05). There were also strong trends that were not statistically significant owing to the small sample size, indicating that internalised stigma and a fear of side-effects were associated with lack of readiness, whereas an intention to disclose to a partner was associated with readiness for treatment.

Presenting the findings, Brendan Maughan-Brown of the Southern Africa Labour and Development Research Unit at the University of Cape Town said that the study results indicate the need for interventions at the time of ART referral that are tailored to better help individuals overcome their surprise at HIV diagnosis and come to terms with their HIV-positive status.

Preparing people for rapid treatment initiation also needs to overcome persisting suspicions about side-effects among people who are otherwise healthy, he added.

He said that the study findings couldn’t provide an instrument to differentiate patients according to readiness for treatment for use in everyday clinical practice, and that more research is needed on this subject.

A common thread in the findings of this study is the role that community awareness of ART, and of people doing well on treatment, is likely to have on people’s readiness to accept the idea of immediate treatment at diagnosis. Is individual treatment readiness a consequence of a community’s preparedness for HIV treatment, and will rapid ART initiation depend on the success of efforts to educate communities in advance of diagnosis about the benefits of antiretroviral treatment?

A webcast of this session is available on YouTube.