90-90-90 progress in southern Africa: HIV testing gap needs to be closed in young people and men 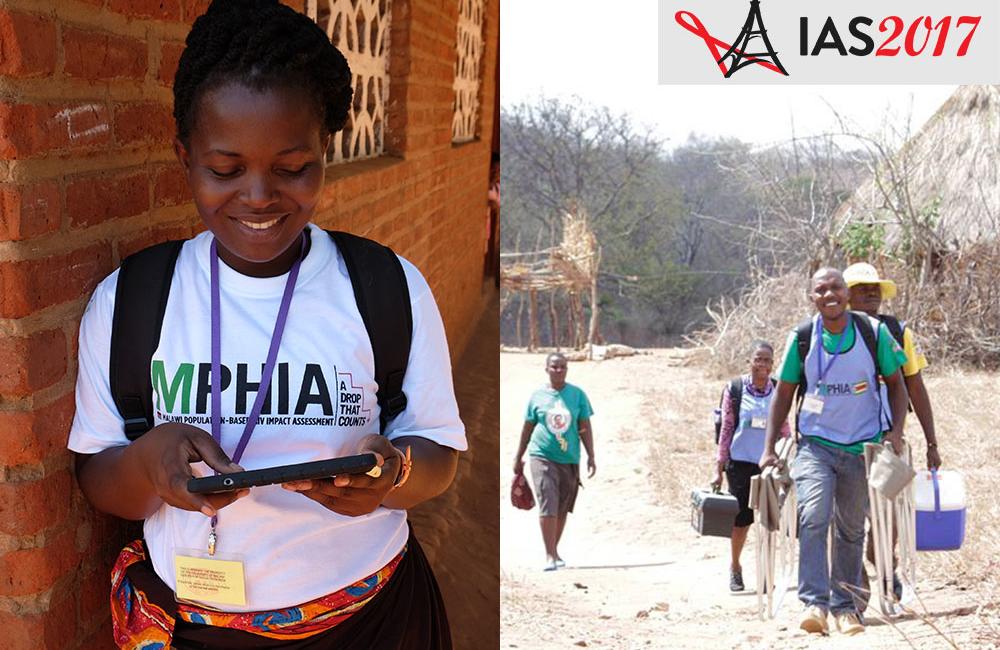 Three African countries with high burdens of HIV infection are achieving very high levels of HIV treatment initiation and viral suppression but need to make better progress on HIV testing in order to achieve the 90-90-90 targets, according to results from large studies presented on Tuesday at the 9th International AIDS Society Conference on HIV Science (IAS 2017) in Paris.

Population-based HIV Impact Assessments (PHIAs) measure national progress towards the 90-90-90 goals by carrying out household HIV counselling and testing and interviewing people about HIV treatment. The surveys are being co-ordinated by ICAP at Columbia University, New York, in partnership with the US Centers for Disease Control and Prevention (CDC) and Ministries of Health in PEPFAR-funded countries.

The surveys are designed to monitor progress and identify areas for new investment and service development.

In particular, the PHIAs provide up-to-date information on HIV incidence and prevalence, and information on engagement in care and viral suppression that is independent of facility-based record keeping.

Three PHIA studies, of Malawi, Zambia and Zimbabwe were presented. Each showed that lack of awareness of HIV-positive status is higher in younger people, and that men are more likely to be unaware of their HIV status than women.

The Zambia Population-based HIV Impact Assessment (ZAMPHIA) was carried out in 2016. It offered HIV counselling and testing to 12,310 households in 511 areas selected to provide a national representative sample. A total of 19,029 adults and 7959 children consented to take part. Women were more likely to participate in testing than men (71 vs 63%, p < 0.0001).

Zambia’s overall progress towards the second and third 90-90-90 goals is very strong: 85% of diagnosed people are on treatment and 89.3% of those on treatment are virally suppressed, with no substantive difference between women and men. Awareness of HIV status is lagging behind: 67.3% of people with HIV in Zambia knew their HIV status in 2016.

The Zimbabwe Population-based HIV Impact Assessment (ZIMPHIA) was carried out in 2015 and 2016.

Lack of awareness of HIV status was much more likely in people under 35. Half of 15-24 year olds were unaware of their HIV status compared with less than one in five of 45-55 and 55-64 year olds. Younger age was also strongly correlated with not being on treatment after HIV diagnosis and not being virally suppressed on treatment.

The Malawi Population-based HIV Impact Assessment (MPHIA) was carried out from November 2015 to August 2016. Nellie Wadondo-Kabondo of CDC Malawi presented the survey’s findings on progress towards the 90-90-90 targets in women with HIV.

Malawi began moving towards a treat-all approach for women in 2013 when it introduced Option B+, the immediate initiation of lifelong antiretroviral treatment in pregnant and breastfeeding women. Since 2013, there has been concern that women are becoming lost to follow-up after delivery.

There were similar disparities by age in treatment uptake and viral suppression. Overall, 69.5% of all women with HIV – diagnosed and undiagnosed – were on ART, but in the 15-19 age group only 37.4% were taking ART and all age groups below 35 had below-average levels of treatment uptake. This pattern was replicated for viral suppression; although 73.1% of all women with HIV in the population were virally suppressed, just 35.6% of 15-19 year olds and 56.2% of 20-24 year olds were virally suppressed.

The findings from Malawi reflect a pattern being seen across eastern and southern Africa: younger women are less likely to have tested or started treatment, and the same is being seen in young men. Greater focus on diagnosing HIV in younger and offering treatment services will be needed to bridge the gap, conference participants agreed.