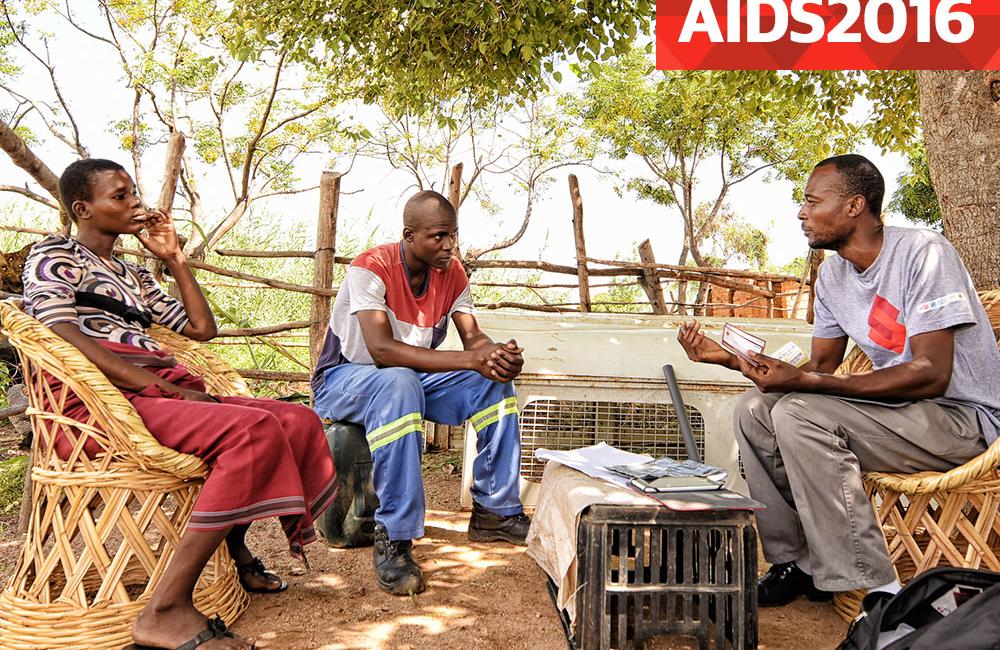 Early data from STAR, the largest study yet of HIV self-testing, suggests that there is a strong demand for self-testing in rural Zimbabwe, the 21st International AIDS Conference (AIDS 2016) heard this week. Other studies examined whether self-testing kits can help the male partners of pregnant women to test and whether such use might sometimes be coercive.

The World Health Organization (WHO) defines HIV self-testing as “a process in which an individual who wants to know his or her HIV status collects a specimen, performs a test and interprets the result by him or herself, often in private”. By giving people the opportunity to test discreetly and conveniently, HIV self-testing may increase the uptake of HIV testing among people not reached by other HIV testing services, including people who have never taken a test.

The STAR project is is aiming to explore a range of distribution methods in order to understand their effectiveness in reaching end-users and facilitating linkage to care. The four year project aims to ‘catalyse’ the market for HIV self-testing and generate evidence on the feasibility, acceptability, scalability, costs and cost-effectiveness of different approaches.

As well as influencing WHO guidance and national policies, the project aims to help companies and policy makers understand the size of the market for HIV self-testing – this could encourage manufacturers to invest more in this area.

In the first phase of the study (2015-2017) over 730,000 HIV self-tests are being distributed across Malawi, Zambia and Zimbabwe. The second phase of the project (2017-2019) will be extended to South Africa and will provide a further two million tests through the most successful distribution models in order to demonstrate the population-level health impact of HIV self-testing.

Distribution models being examined include:

The conference heard data from a pilot project using paid community volunteers in one rural area of Zimbabwe. A process of community consultation identified 79 volunteers who were trusted by their peers to go door-to-door to explain and distribute self-test kits.

Demand for the devices outstripped supply, with 8095 kits distributed in a month. The volunteers were successful in reaching both men and women, with an estimated 61% of adult men and 52% of adult women receiving test kits.

Health workers in the region sometimes express the view that self-testing will best be done under the supervision of a health worker, so as to ensure that counselling is provided and the result is accurately read. This was an option in the project but the overwhelming majority of people (85%) preferred to take the test in private.

Focus group discussions were held in the community a few weeks later. Most respondents appreciated both the offer of self-testing and the knowledgeable and helpful community volunteers. Nonetheless some people said it could be hard to turn down the offer of the tests “because you respect the volunteer and they have put a lot of effort coming to your house”.

During focus groups it became apparent that some people with previously diagnosed HIV used a self-test in order to ‘verify’ their HIV status.

In a second Zimbabwean study, outreach workers brought a mobile testing unit to both rural and peri-urban communities. Given the choice between being tested by a health worker and using a self-test kit, 70% chose self-testing.

In African countries and elsewhere, women are generally tested during pregnancy, while their male partners rarely access HIV testing. Various strategies have been tried to encourage men to test during their partner’s pregnancy, with mixed results.

Could self-testing kits provided to women attending antenatal clinics make it easier for their partners to test? Researchers in Kenya conducted a randomised trial with three arms, with the aim being to increase men’s testing rates. The study enrolled 1410 pregnant women and their partners.

Among men who received a letter referring them to testing facilities, 28% tested. Among those who received an improved referral letter, 37% tested. However among men whose female partner had been provided with two self-test kits, 83% tested for HIV.

When women were given the self-test kits, they were counselled on appropriate ways to discuss their use with their partner. Women who had concerns about violent reactions from a partner were not given self-test kits.

Qualitative data from the study highlighted several barriers to men’s HIV testing, including pervasive HIV stigma. Work that kept men busy during clinic opening times, which may be too far away to be accessible, also discouraged men’s testing.

Moreover, men were described as being dismissive of women asking them to test:

“My husband just laughs and thinks that I am foolish.”

In terms of drivers of testing among male partners, privacy and the possibility of the couple testing together were both felt to be important.

“He may fear to go to the nearby clinic because maybe the doctor that you will get there, lives in your area or he knows you. Yes you are told that there is privacy, but how sure are you that he is not going to share with somebody else?”

“Between the two processes, at home and at the hospital, it is easier to do it at home because if both of you are given, you are both going to test yourself together.”

One concern about HIV self-testing relates to whether it could be used coercively, with one person forcing another to test. In many countries where self-testing is being considered as a public health intervention, there are already high rates of gender-based violence – is it safe to provide self-testing kits in this context?

Researchers working on a self-testing research project in Blantyre, Malawi recorded 36 cases of gender-based violence during the study period, including two which were thought to be linked to HIV self-testing.

Some of their findings were paradoxical. Men were more likely than women to say that their partner had ‘coerced’ them into testing. Women often brought self-test kits into the household and the researchers consider their use to often be empowering for women.

“When I got the kit I took two days without testing, then my wife said that I won’t eat that day if I don’t test. She went into the bedroom and poured water on my clothes. There was force, I knew that if I don’t test then there won’t be sex for me.”

Coercive testing was viewed as acceptable or beneficial in some contexts. One woman said:

“It is sometimes good… if one of you in the relationship is refusing to get tested you can doubt them. So it is good at times to force someone to get tested so that you all know your HIV status.”

“It is necessary because they are wishing you well. People have to know how they are [HIV status] before it is too late.”

One of the objectives of the STAR research project into HIV self-testing, described at the beginning of this article, is to better understand how common coercion and other possible social harms are, following self-testing.