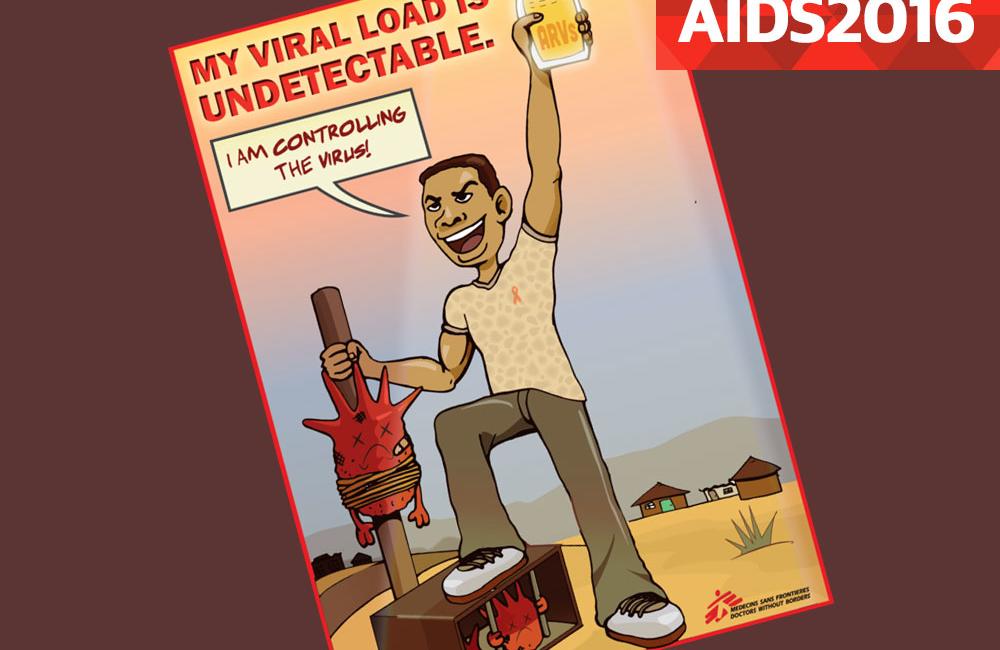 Findings from the study, funded by UNITAID, the international drug and diagnostic purchase fund and carried out in seven countries by Médecins Sans Frontières (MSF), were presented this week at the 21st International AIDS Conference (AIDS 2016) in Durban, South Africa.

Maintaining viral suppression also minimises the risk of onward transmission and the monitoring of viral suppression rates gives some idea of the potential for HIV incidence in the population. Measurement of viral load is essential at a programmatic level in order to measure facility, district and national performance in achieving the last of the 90-90-90 targets - 90% of people on treatment virally suppressed.

Until recently viral load testing was largely unavailable outside large urban hospitals or research settings in low- and middle-income countries, but recent reductions in the cost of viral load testing, coupled with World Health Organization guidance recommending the use of viral load in preference to CD4 counts as the primary laboratory monitoring test for HIV treatment, are leading to the rapid expansion of viral load testing in sub-Saharan Africa and other settings where it was once considered unsuitable for use.

PEPFAR (The US President’s Emergency Plan for AIDS Relief) has already funded rapid scale-up of viral load testing in six countries and plans to use the lessons learned to support `Test and Start` activities in other PEPFAR focus countries, using routine viral load testing. At the same time, the cost of viral load testing is falling: following negotiations between manufacturer Roche and the Diagnostic Access Initiative, the company announced a price reduction to $9.40 per test for lower- and middle-income countries.

Further price reductions are plausible: speaking at the UN 90-90-90 Target Workshop preceding the conference, Trevor Peter of the Diagnostic Access Initiative said that demand for viral load tests is forecast to rise from 5-10 million tests to at least 22 million by 2020. The 2015 price reduction enabled 1.5 million extra tests in the past year, he added.

At AIDS 2016, MSF presented the fruits of four years of field implementation of viral load testing, supported by a grant from UNITAID.

The study found big variations between district programmes in the four countries, not only in the coverage of viral load testing but also in compliance with other steps in the viral load algorithm.

Provision of enhanced adherence counselling to people with detectable viral load results failed to take place in 43% of people in Buhera, Zambia, and almost a quarter of people failed to receive counselling in the best-performing programme (Gutu), also in Zimbabwe. Staff at these sites said that a shortage of dedicated staff to perform enhanced counselling was a major obstacle.

Switching to second-line treatment occurred in a little more than one-third of patients at the best performing sites, and at one site (Thyolo, Malawi) only 15% of people with a detectable viral load above the very high local threshold (5000 copies/ml) were switched to second-line therapy. When confronted with these findings all sites said that reluctance to task shift and decentralise second-line antiretroviral therapy (ART) prescribing formed the biggest barrier to complying with this stage of the algorithm. In Malawi, for example, recommendations for switches to second-line treatment had to be approved by a national-level committee before medication could be supplied.

Sites with a higher rate of switching reported that getting results on the same day as testing took place, having a clinician on site at least once a week who was authorised to switch people to second-line treatment, and having second-line drugs available on site for people who were switched, were the factors that facilitated acting on viral load results.

In a report on the pilot programme issued this week at AIDS 2016, MSF highlighted a number of lessons learned regarding implementation:

MSF reports on the programmatic experience and the laboratory implications of making viral load testing routine can be downloaded from the MSF website.

MSF South Africa has also produced a An Implementer's Guide To Introducing HIV Viral Load Monitoring – a toolkit providing training materials for clinic and laboratory implementers, including exercises to examine how procedures and workflow can be adjusted to implement viral load monitoring.

Despite interruptions in health care during the COVID-19 pandemic, there was a slight increase in the rate HIV virologic suppression during the pandemic among some patients in Malawi. These findings were published in the Journal of Clinical Epidemiology.
Infectious Disease Advisor
2 Aug 22
Viral load

More people had a detectable viral load using a newer assay, which has implications for HIV treatment and prevention.
POZ
9 Jun 22
Viral load