Progress towards 90-90-90 targets is promising, but funding is the critical step, says UNAIDS leader 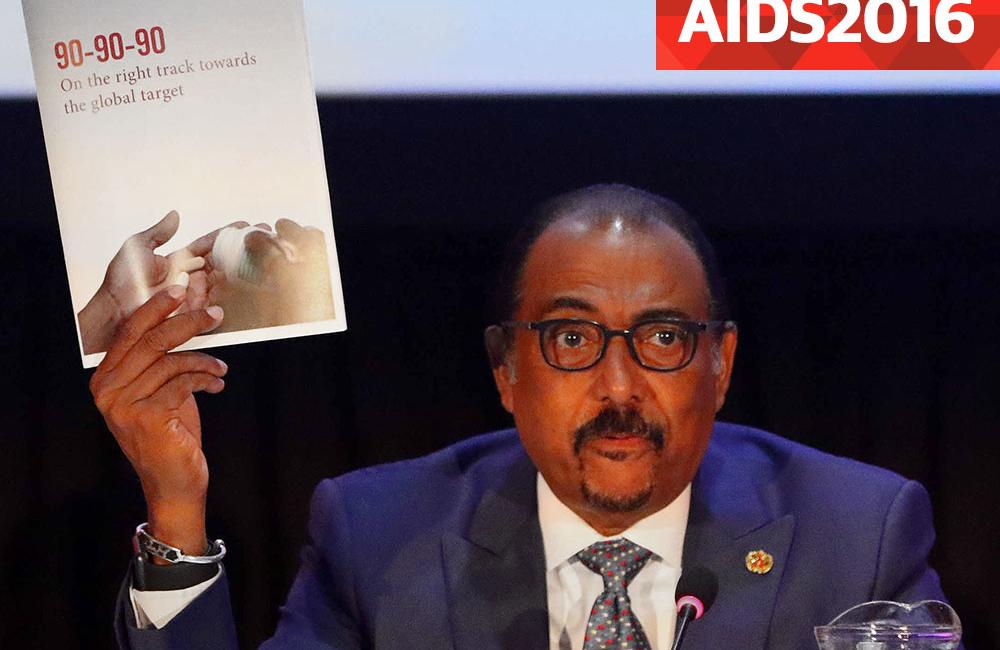 The 90-90-90 targets for testing, treatment and viral suppression are achievable by 2020 in many high-burden countries, but donor retreat is now the biggest threat to widespread success, delegates at the UN 90-90-90 Target Workshop ahead of the 21st International AIDS Conference (AIDS 2016) in Durban agreed yesterday.

The 90-90-90 target – 90% of people with HIV diagnosed, 90% of diagnosed people on treatment and 90% of treated people with fully suppressed viral load by 2020 – is intended to galvanise national and global action to control HIV and end the AIDS epidemic by 2030. The target was endorsed by national governments at a UN High-Level Meeting on Ending AIDS in New York in June 2016 and now forms the framework for the global HIV response.

A new progress report on the 90-90-90 targets issued by UNAIDS on Sunday shows:

Debate at the UN 90-90-90 Target Workshop focused on whether the target is achievable without a further commitment of funds by donors, starting with the Global Fund 2016 replenishment.

Speaking to aidsmap.com, UNAIDS Executive Director Michel Sidibé said: “If we take our foot off the pedal I am convinced that we will be unable to double the number of people on treatment again, and we will not see the major decline that we are expecting. Because of competing priorities, 13 countries out of 14 reduced their contribution to the HIV response globally. If this trend continues we will have a rebound, we will not be able to achieve our goals of 90-90-90 and [a reduction in incidence] by 2030.”

“We are not on track to reach 90-90-90 – we are not even halfway there yet,” warned Asia Russell of Health GAP. “What is at stake is how quickly funding and policy will follow the science. I’m very concerned that there is a new consensus [emerging], that funding for treatment for all is impossible,” she said.

What has allowed some countries to make rapid progress?

What has promoted rapid scale-up in those countries that have made fastest progress? Michel Sidibé identified a number of common factors.

“Firstly, they’ve been very strategic in terms of identifying their targets, and making sure they rapidly increase their testing. Testing is the first element of their success story. In South Africa, when we launched the testing campaign, it completely changed the demand.”

South Africa’s HIV response was transformed not just by a change in political leadership, but by a massive HIV testing campaign between 2010 and 2012 which tested 20 million people, and another campaign in 2015-16, which reached 11 million people.

“The second is they’ve been more efficient, more cost effective in delivering their services. Again in South Africa, they reduced the price of medicines by 53%; this helped a lot to increase the number of people on treatment.”

“Also, all those countries have made sure that they don’t wait to put people on treatment, they’ve created a new way to manage [patients],” he added. He pointed to the example of adherence clubs in South Africa, now incorporated in national guidelines, which reduce the need for clinic visits, provide adherence support and allow the distribution of medication at community level.

Getting the mix of testing interventions right to maximise diagnoses depends on accurate knowledge of where HIV cases are being found – and where they are being missed – David Ripin of the Clinton Health Access Initiative (CHAI) told the meeting. Large-scale community-based testing campaigns may be less cost-effective than HIV testing in TB clinics in some settings, but in others, community-based campaigns may be essential for reaching those often left behind – men.

Numerous presenters at the workshop highlighted a similar finding from sub-Saharan Africa: the likelihood of achieving the first '90' target depends on closing the testing gap between men and women.

“Men link to care, stay in care, stay on treatment at the same rate as women, but women’s testing rates are much higher,” said Ambassador Deborah Birx of the President’s Emergency Plan for AIDS Relief (PEPFAR).

She highlighted the particular importance of testing and linking to care young men, in order to break the cycle of HIV transmission between young men in their 20s, who infect young women in their teens. These young women subsequently infect their male partners, who go on to infect younger women, and so on.

Frank Tanser of the Africa Centre for Population Health, South Africa, showed how a population cohort study in KwaZulu-Natal is using data to identify areas of highest viral load and undiagnosed infection, and phylogenetic tracking of recent infections, in order to target testing and treatment activities. The group identified one district where around one in four people may have high or detectable viral load, many of them probably undiagnosed. Concentrating testing in this area could break the chain of transmission across the entire district, they hope.

Although the average diagnosis rate for eastern and southern Africa was 56%, presentations from a range of countries in the region show that much higher rates of diagnosis are already being achieved with a mixture of intensive community-based campaigns and provider-initiated testing and counselling. David Maman reported that MSF’s Chiradzulu treatment programme had already been able to achieve a diagnosis of 73% in rural Malawi back in 2013. In Zambia and South Africa, the PopART study has shown that an intensive household testing campaign achieved a 90% diagnosis rate, Sarah Fidler of Imperial College told the meeting.

Outside sub-Saharan Africa several middle-income countries have shown that very high rates of diagnosis can be achieved. In Brazil, 87% of people living with HIV are estimated to be diagnosed, while Thailand is very close to reaching the first '90', with 89% of people diagnosed.

African countries are out-performing many other regions of the world in linking people to care and initiating people on treatment, the UNAIDS 90-90-90 Target Workshop heard.

However, a survey of published guidelines carried out by the International Association of Providers in AIDS Care (IAPAC) shows that only 22 countries have adopted World Health Organization (WHO) 2015 treatment guidelines, which recommended antiretroviral treatment for everyone diagnosed with HIV infection. So far only three countries in sub-Saharan Africa have adopted the WHO guidance (although South Africa and Kenya will also begin implementing it shortly). The survey found that those countries in sub-Saharan Africa that have adopted the 2015 guidelines took an average of eight months to do so.

“We need to break with this pattern of inconsistent adoption of guidelines if we are to reach the 90-90-90 targets,” said Dr Reuben Granich, Vice President of IAPAC.

Outside sub-Saharan Africa the gap between diagnosis and treatment is especially large in Asia and the Pacific, UNAIDS reports. Although 64% of people living with HIV in the region have been diagnosed, only 41% are on treatment, while in western Europe and North America the gap is even larger. Eighty-nine per cent of people living with HIV in the wealthiest countries of the world are diagnosed but only 59% are on treatment, despite updating of guidelines in almost all of those countries to support treatment for all.

Some countries are already remarkably close to achieving the third 90. A study of a large sample of Botswana’s population shows that 70% of people living with HIV had an undetectable viral load, and 96% of those on treatment had undetectable viral load. Treatment programmes in Malawi, Rwanda and Kenya report that over 60% of people living with HIV are virally suppressed, according to the UNAIDS report. As more people are tested and enrolled on treatment these proportions are likely to rise quickly to match the success of treatment in Botswana.

Conclusion: The urgency of action

Despite the encouraging news from sub-Saharan Africa, PEPFAR Ambassador Deborah Birx warned of the price of failure. Ambassador Birx pointed to the imminent youth bulge in sub-Saharan Africa, which will double the population aged 15 to 24 over the next decade, and the risk of a reignited epidemic if HIV transmission is not tightly controlled.