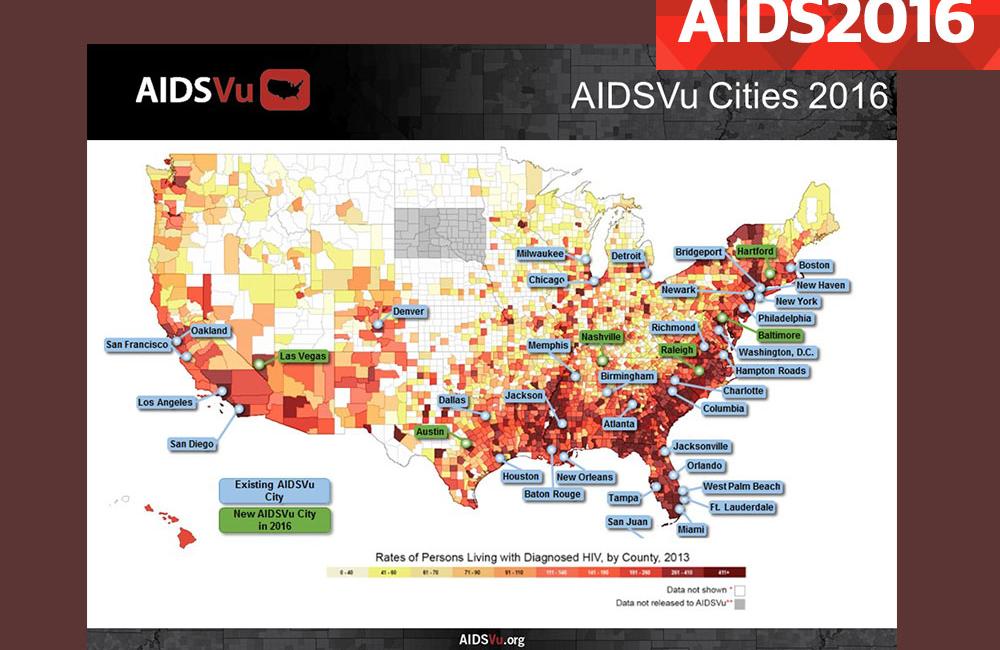 Image from presentation by Travis Sanchez.

Global health agencies have recently put a new emphasis on geography. UNAIDS have called for programmes to focus on “location and population”. PEPFAR (The US President's Emergency Plan for AIDS Relief) says there is a “need to do the right things in the right places at the right time”. The Global Fund believes there is a need to “target resources to areas with the greatest need”.

But how can these principles be applied in practice? Speakers at the 21st International AIDS Conference (AIDS 2016) in Durban, South Africa, last week outlined examples in which maps and geographic analyses have helped improve HIV services. Their examples came from the United States and South Africa.

Travis Sanchez of Emory University introduced AIDSVu, a set of interactive, online maps that allows users to visually explore the HIV epidemic in the United States. By making it readily accessible to policy makers, it has been used to better target limited healthcare and HIV prevention resources.

For example, Sanchez showed maps of Chicago, showing rates of diagnosed HIV in different parts of the city, broken down by ethnic group. As expected, rates in black people are higher than among whites and this is the case throughout the city. But the map highlighted some unexpected clusters of cases – high rates in white people in some predominantly black zip codes in the city’s south-central area, as well as high rates in black people in some predominantly white zip codes in the north-east of the city.

In Philadelphia, health officials used HIV prevalence data at the census-tract level (the most detailed unit available, covering a neighbourhood with a few thousand residents) in order to target door-to-door testing campaigns. “This is really about targeting local resources in the local communities that need them most,” Sanchez said.

While mapping rural Alabama it became clear that a number of counties with high rates of HIV were also designated as ‘Health Professional Shortage Areas’. With HIV concentrated in deprived populations who have limited access to transport to medical facilities further afield, there is a potential for people to drop out of care and have uncontrolled viral load. In response, health officials set up a telemedicine service so that primary care clinics in the under-served areas could be linked with medical providers elsewhere in Alabama. A web-based video link (a bit like a Skype call) allows patients to receive medical care and counselling at a distance.

In Atlanta, the mapping demonstrated how HIV and poverty overlapped. Looking into the data in more detail, ‘hot spots’ of poor linkage to care and low rates of viral suppression were identified. While some areas of high HIV prevalence were served by HIV treatment facilities, several other hot spots were far from medical facilities, with low rates of car ownership and poor public transport links.

Sanchez said that mapping these relationships had been “transformational” in helping local officials identify the structural barriers to care and prepare the local Strategy to End AIDS. The plans place emphasis on creating patient-friendly systems that facilitate entry into care, including transport support.

Frank Tanser of the Africa Centre for Population Heath has been intensively studying a rural, poor area of KwaZulu-Natal. His mapping shows that HIV incidence, HIV prevalence and deaths are far from evenly distributed, with all three highly concentrated in informal settlements and peri-urban areas bordering a major highway.

“I think these maps speak to the tyranny of averages,” Tanser said. Rather than spreading healthcare resources evenly across all areas, there’s an opportunity to use this “incredible spatial heterogeneity” to focus investment on the most vulnerable populations and so bring epidemics under control, he said.

The maps have identified ‘hot spots’ in which a significant proportion of people have uncontrolled HIV – in some specific locations, more than one-in-four adults in the general population have a detectable viral load. Such communities may not only have a high burden of HIV themselves, but may also be driving onward transmission in the wider geographical area.

Phylogenetic analysis (examining the genetic links between HIV in different individuals) suggests that a high proportion of new infections in other communities can be linked back to individuals living in the ‘hot spot’ communities beside the highway. Transport and migration is likely to play an important part in this.

Targeting resources so as to improve the treatment cascade in these specific locations could have a disproportionate impact on the larger epidemic, he suggested.

The examples presented to the conference depend on rich sources of data. AIDSVu links extensive data collected by American public health agencies with socio-economic information from the American census. The Africa Centre conducts intensive HIV surveillance activities within a 20km by 20km area. How then can the approach be applied in settings where such resources are not available?

Frank Tanser said that insights derived from studies, such as the relationship between distance to health facility and HIV prevalence, would likely be applicable elsewhere. Other urban and peri-urban informal settlements in African countries are likely to be ‘hot spots’. Those located near major transport routes are especially likely to contribute to new infections, but can also be easily reached by health providers.

One important gap in routinely collected data is that it rarely records details that would identify individuals as members of key populations (such as sex workers or people who inject drugs). As a result, key populations tend to be invisible in many spatial analyses although they may cluster in specific areas. Frank Tanser said that there was potential to apply geographical analyses to key populations (using respondent-driven sampling) but that there could be sensitivities when mapping stigmatised and criminalised groups.

Closing the session, Gesine Meyer-Rath said that funders were often very interested in mapping as targeting could mean that financial resources could be used more efficiently. This could be a way of justifying spending less. But she said that the same data could also be used by activists and members of affected communities, to demand services where they really are needed.