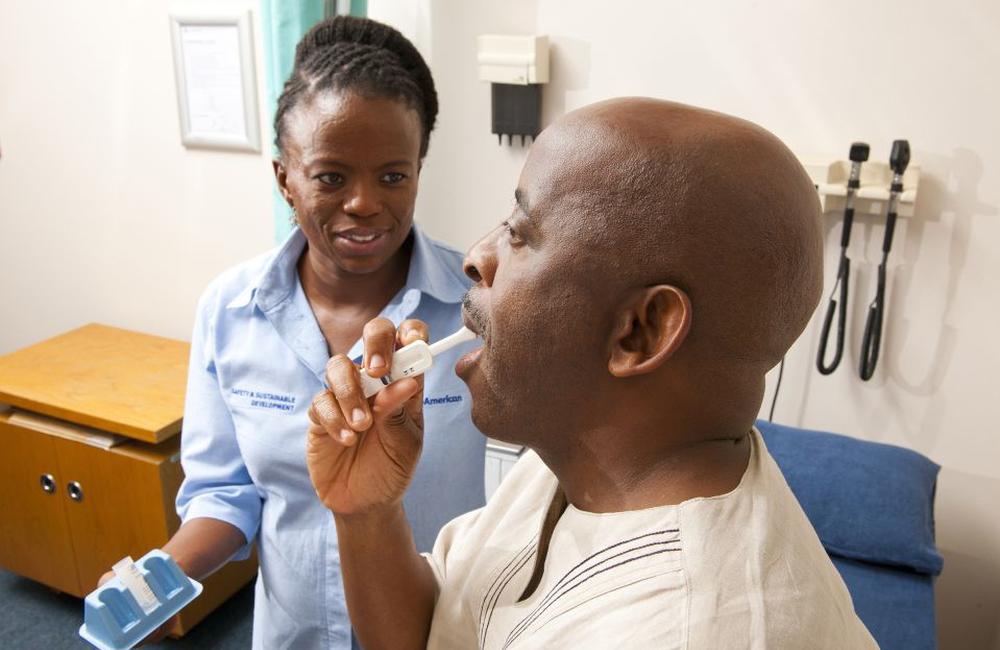 A nurse and HIV counsellor at Anglo American South Africa, performing an HIV test at the Johannesburg Clinic.

Nearly 40 million people worldwide are living with HIV, and it is estimated that 26 million of these are workers aged 15 to 49 – the prime of their employable years. As such, the impetus is on workplaces in affected countries to implement wellbeing programmes for their employees.

Tackling HIV is good for business

Companies operating in countries with high infection rates need to view HIV as a business imperative, and not merely as a corporate social responsibility issue. They need strong cross-sector partnerships. This, coupled with structured and sustainable programmes that are well-resourced across various areas of a business, will be crucial to ending the AIDS epidemic by 2030.

Apart from the obvious – and absolutely paramount – moral and human incentive of encouraging HIV testing and treatment, the benefits of workplace testing can have a ripple effect: improving not only the lives of those with HIV, but their families, co-workers and the population at large. A strong prevention programme is important to prevent new cases from occurring. Research has shown that ongoing gender inequality and poor knowledge on sexual and reproductive health, especially among adolescents, contributes to the spread of the virus.

The physical health benefits of workplace programmes are proven, but there is also a psychological dimension that plays just as great a part. Effective treatment programmes are necessary not only to protect those directly affected, but also to maintain morale among staff members. At the end of the 20th century, colleagues would become ill and eventually die due to the uncontrolled infection. The perceived lack of control and emotional strain is demoralising and can inculcate learned helplessness in our teams. Even if HIV is not directly affecting our own health, it is having a huge impact on our daily lives.

The workplace can be a safe place to test

Employees and managers have such a crucial role to play, as advocates to encourage testing and treatment among their peers. It does appear that fear of stigmatisation is still strong and stopping people from getting an HIV test. This is particularly true among men. A recent study conducted by the Johns Hopkins Bloomberg School of Public Health points out that in some countries, particularly those with discriminatory policies, getting tested can be a potentially dangerous action for men. In Malawi, for example, the report highlights a case where a man being tested for sexually transmitted infections was arrested after it became clear he contracted an infection from another man – an action that frightened other gay men away from being tested. While there may still be stigma attached to asking for HIV testing at work, being among peers and confidants could make it that much easier to seek treatment in a safe place.

At Anglo American, we run the world’s largest private sector testing programme for HIV and TB, as both diseases are closely linked. We offer free antiretroviral therapy to our employees and their direct dependents. The number of our employees enrolled in HIV programmes increased 10% from 2014 to 2015 and now 88% of our HIV-positive workforce is enrolled. By following the expert advice to start treatment early, we hope to increase this number even further.

In terms of HIV, southern Africa is still the most severely affected part of the world. This has particular resonance in the mining industry, which is a strong private sector player in the region, and particularly for Anglo American, whose historical roots in the continent continue to this day.

For businesses, particularly within the mining industry, HIV should be one of our paramount causes. If we hone in on HIV and AIDS treatment and prevention, we will benefit the industry as well as having, perhaps, the greatest possible impact on regional health. We should bring the number of new infections down, ensure that people start HIV treatment immediately and continue treatment for the rest of their lives. But the first step is getting tested. If we can demonstrate that this is possible, it will encourage others to take bold steps to reach the same goals.

Could workplace HIV programmes be one way to 'find the men'? Recent studies have shown low rates of HIV diagnosis among men in southern Africa.

During the COVID-19 pandemic, a Chicago hospital offered HIV screenings in the emergency room. Can such measures adequately address gaps along the continuum of care?
TheBodyPro
28 Jun 21
HIV testing programmes & uptake

South Africa needs a public health response that expands the successes of the country's HIV testing and treatment programme to provide care for multiple diseases.
The Conversation
28 Jun 21
People who inject drugs

Emergency departments and inpatient medical personnel rarely conducted HIV testing on intravenous drug users in a West Virginia county with one of the nation’s highest spikes in such cases, according to a federal investigation released Thursday.
Associated Press
25 Jun 21
More editors' picks