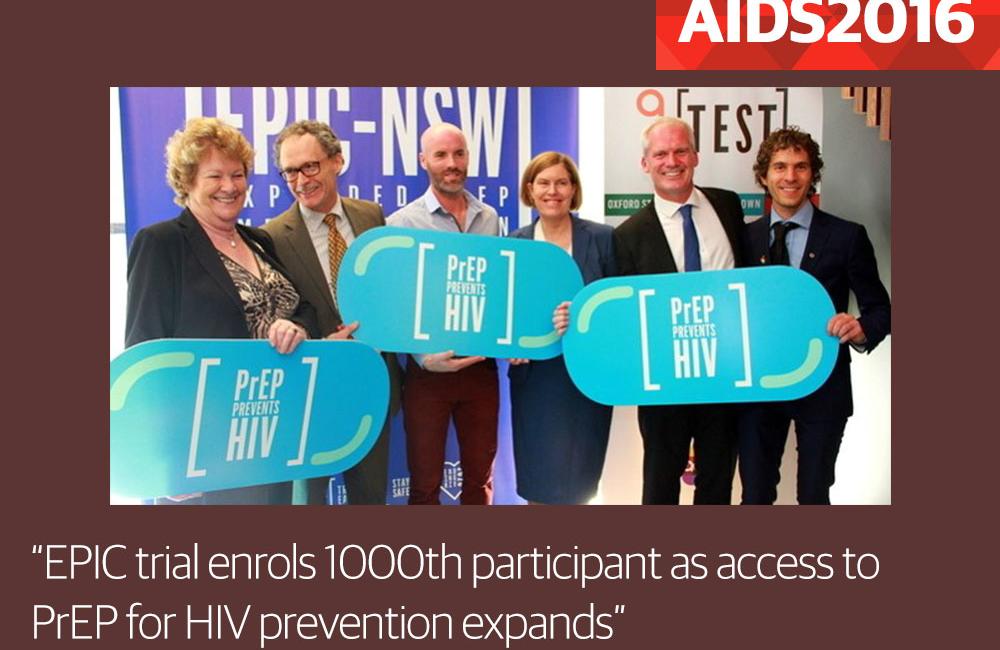 Image from presentation by Iryna Zablotska, The Kirby Institute

Australia plans an ambitious programme of pre-exposure prophylaxis (PrEP) provision for gay men at high risk of HIV, with the aim of ‘virtually eliminating’ HIV in the gay community by 2020.

Iryna Zablotska of the University of New South Wales told the 21st International AIDS Conference (AIDS 2016) that in order to meet the needs of an estimated 14,000 users, the PrEP roll-out would initially at least be in the form of scientific implementation studies conducted by at least three of the individual Australian states. This would enable state governments to subsidise the drug costs. The New South Wales programme was launched under the name of EPIC-NSW in March, and the programme in Victoria, under the name PrEPX, in June. One in Queensland is due to start soon.

“There are four essential things that had to happen in order for a PrEP programme like this to happen,” she said. “We had a Ministry of Health that was actively committed to making PrEP happen; a positive consensus for PrEP among medical professionals; a supportive network of sexual health clinics and gay-friendly GPs; and a proactive LGBT health community that devised innovative awareness and social media campaigns.”

PrEP is needed in Australia for the same reason it is in many countries; after a peak of 2411 diagnoses in 1989, annual diagnoses fell to 750 in 1999, but have since then slowly climbed to 1081 in 2014, and show no signs of slackening off. Three-quarters of HIV infections in Australia are in gay men. The Australian treatment ‘cascade’ is 88% diagnosed, 73% of them on treatment and 92% of them virally suppressed, in other words 59% of all people with HIV virally undetectable - better than a lot of high-income countries, but 13% short of the UNAIDS 90/90/90 target.

Australia, however, is the first country providing PrEP to suggest that it could be what will make all the difference. Zablotska said, “PrEP is a useful and necessary tool in the HIV prevention toolkit.”

Surveys conducted between 2011 and 2015 show accelerating awareness of PrEP. One in 40 ‘community-attached gay men’ say they have already taken PrEP acquired online or from friends and, depending on survey, between 1 in 30 to one in ten men at the kind of risk that would be covered by the criteria for the roll-out study. A study in 2012 found that only 21% of at-risk gay men said they would be interested in taking PrEP; the following year 71% of high-risk gay men in a separate study said so.

EPIC-NSW was launched on 1st March this year, two months in advance of PrEP being approved for prevention use by the country's drug licensing agency. Studies supporting the adoption of PrEP included two PrEP pilots, PrELUDE and VICPrEP, which started in New South Wales and Victoria respectively in 2014 and are still ongoing. To this has been added Qprep in Queensland which started this year. Between them, however, they have only enrolled 465 men.  It is estimated that 100,000 gay men in Australia are at risk of HIV (one in 230 Australians) and nearly 15,000 at the kind of risk that would meet the criteria for PrEP roll-out.

These criteria are based on incidence studies, which found that annual HIV incidence among men presenting with rectal gonorrhoea was 7%, and with chlamydia, 3.2%. Among people with a regular HIV-positive partner who was not virally suppressed, incidence was 5.4%, among men who’d recently had condomless sex with a partner of positive or unknown status it was 2.3%, and among methamphetamine users it was 1.9%. The criteria for EPIC-NSW is that the person must have had one of these risk factors in the last three months. Background incidence in PrELUDE participants was estimated as 4%.

Based on these criteria it was estimated that 3700 men who have sex with men in New South Wales would be eligible for PrEP. The aim was to fully enrol these 3700 by 31st December but, said Iryna Zablotska, “It appears we grossly underestimated interest in the study and how fast enrolment would happen.” In fact, one thousand gay men enrolled in the first seven weeks of the study. EPIC-NSW will continue till December 2018.

In countries with lower incomes or higher HIV burdens, PrEP will need to be introduced more gradually or its cost borne by global HIV funders.

Kenya has 1.5 million people living with HIV out of a population of 42 mllion (3% prevalence) and a steady 71,000 new infections every year, a figure that has scarcely varied in the last ten years.

Michel Kirugu of the Kenyan non-governmental organisation LVCT Health told the conference that evidence for the efficacy of PrEP in Kenya had been gathered from a number of studies, including the Partners PrEP demonstration project and studies such as the MP3 combination prevention project for youth and studies run by LVCT Health itself, and the sex worker’s organisation SWOP, some of which were ongoing. Following these and Kenya’s decision to license the use of PrEP at the beginning of this year, funding had been agreed to roll out PrEP to more people.

The US global funder PEPFAR would be providing PrEP for young women through its DREAMS project; Partners PrEP would be continuing its demonstration project among couples; and JHPIEGO, the international public health NGO run by Johns Hopkins University, would be running PrEP provision programmes for men who have sex with men and female sex workers in collaboration with LVCT Kenya as part of a project called "Bridge to Scale” which, as its title implies, is designed to bridge the gap to nationally-run programmes.

Kirugu said that providing the funding for PEP was only a part of a successful roll-out. Training health providers would be extremely important as their willingness to recommend and prescribe PrEP would inevitably be influenced by their personal values and level of knowledge. PrEP implies wholesale changes in some people’s “un-useful paradigms of communicating prevention messages”, he said. In particular, less emphasis was needed on negative strategies such as strengthening the fear of health risks, and more on the positive aspects of taking control of your HIV risk such as increasing self-esteem and intimacy.

He added that Kenyan programmes still needed to make decisions on what they considered to be ‘substantial’ risk of HIV; they needed to be cautious about risk assessment so as not to reinforce stigma; they needed to decide how to monitor for adherence; and they needed to decide not only on referral pathways and criteria for starting PrEP, but also criteria for stopping it. PrEP also implied the adoption of alternative, innovative models for service delivery such as community provision, since community-led education and advocacy would be crucial here to devise ways of accessing PrEP people would actually use.

Hasina Subedar of the HIV/AIDS section of the South African Department of Health spoke about PrEP roll-out in AIDS 2016’s host country.

PrEP was licensed by South Africa last December, its first guidelines were finalised in March, and its first recipient received her pills though the Department of Health-funded programme on 1st June.

South Africa, with its huge potential demand and limited resources, has decided pragmatically to phase PrEP in to different high-risk groups sequentially. This is not just because the potential cost cannot immediately be met but because sexual health services for groups such as MSM have not yet finalised their referral and provision procedures. As a small group but one with potentially very high prevalence, a large number of contacts, great vulnerability and a strong infection potential, female sex workers are being chosen as the first group to receive PrEP and eleven clinics that provide sexual health services specifically for female sex workers are the sites. Seven are urban sites in Gauteng province, Durban, Pietermaritzburg and Cape Town and the other four are rural sites at truckstops on highways.

The number of female sex workers given PrEP initially has in fact not been that large. In the programme’s first month, 833 female sex workers came forward for testing of whom 154 (18.5%) tested positive – 60 (39%) of these immediately started ART. In contrast only 94 of the 679 who tested negative (14%) started PrEP, 43 at one site. This is partly to do with female sex workers not knowing about PrEP; however, in some places they have displayed quite sophisticated knowledge. Helen Rees said that female clinic patients who had originally rejected PrEP in trials returned after it was licensed saying “now the government has licensed it, we feel PrEP is safe and not just an experiment.”

Slow provision is a lot more to do with health providers needing to be trained up to get over initial uncertainty and reluctance to recommend or prescribe PrEP. In established female sex workers clinics, nurses test the women and prescribe ART already but the ‘trucker sites’ are new to HIV and sexual health provision and will need more support to start.

Although PrEP is being provided at facilities designed for female sex workers, Hasina Subedar said that if other at-risk persons requested PrEP it would be supplied. The first male PrEP client was in fact a policemen whose partner was a sex worker, and he requested and was given PrEP because he recognised he was at risk too.