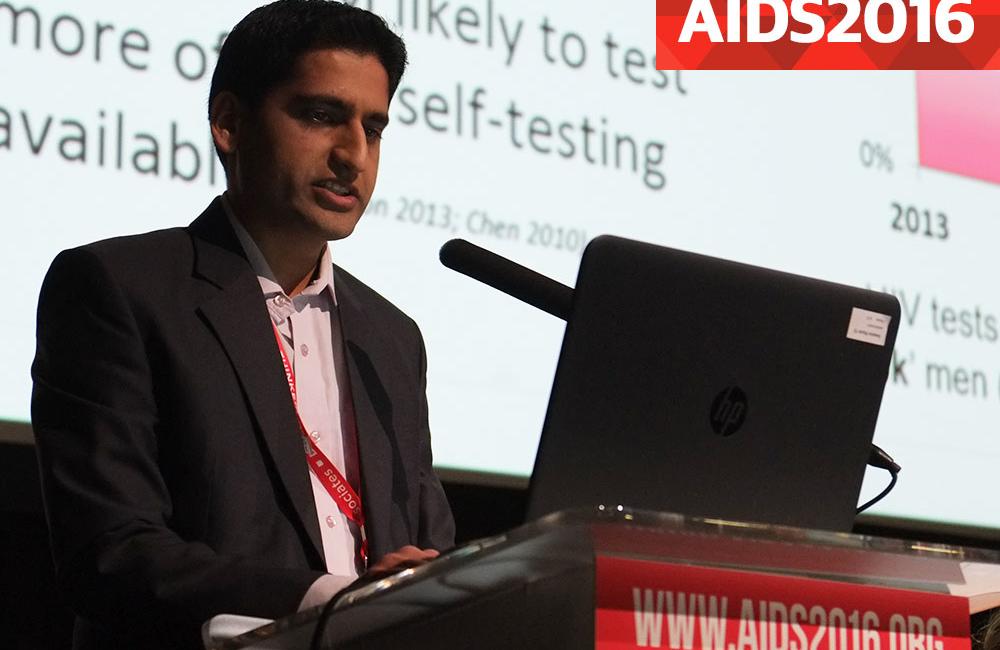 A randomised trial conducted with Australian gay men has shown that easy access to self-testing kits can double the frequency with which men test for HIV, with an even greater increase in men who used to test infrequently. Muhammad Jamil of the Kirby Institute presented the results to the 21st International AIDS Conference (AIDS 2016) in Durban, South Africa, on Friday.

HIV self-tests (devices for home testing) have been approved for sale in the United States, United Kingdom, France and other countries. Australian policy changed in 2014 to allow manufacturers to submit self-tests for regulatory approval, but none have done so yet.

In this randomised study, half the men received four self-testing kits (the OraQuick In-Home HIV Test) and could request additional kits if needed. The number of kits provided corresponds to the recommendation that higher risk men test every three to six months.

Men in the control group only had access to HIV testing through usual services, but would be provided with self-testing kits after one year.

The primary outcome measured was the average (mean) number of HIV tests per man during the first year of follow-up.

Results were even more impressive among men who had previously tested infrequently:

The equal number of tests done in health facilities between intervention and control arms shows that self-tests supplemented rather than replaced facility-based testing.

The researchers were concerned that the easy access to HIV self-tests could result in fewer men in the intervention group going to a clinic to test for sexually transmitted infections. But there were no differences in the number of sexual health screens done (two per year in ‘recent testers’ and one per year in ‘non-recent testers’).

The only negative points about HIV self-testing to be agreed with by a comparable number of people were it not being possible to have a full sexual health check (57%) and the results being less accurate (25%).

In the UK, a large trial called SELPHI is about to recruit 10,000 men who have sex with men. It aims to assess whether access to self-testing for HIV (offered at no cost via the internet) leads to increased rates of HIV diagnosis and linkage to care.