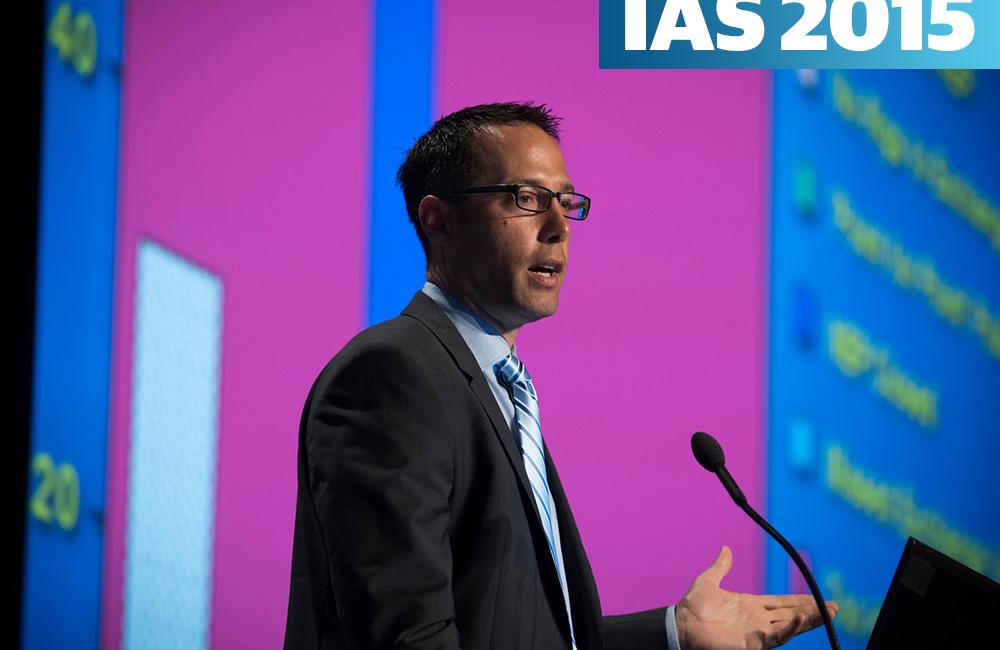 Evan Wood at IAS 2015 ©Marcus Rose/IAS
This article is more than 7 years old. Click here for more recent articles on this topic

“We talk a lot about the success of treatment as prevention in Vancouver, but we always need to make sure people understand that this requires an integration of various approaches,” Dr Evan Wood of the University of British Columbia said in a plenary presentation to the Eighth International AIDS Society Conference (IAS 2015) in Vancouver, Canada, last week.

HIV diagnoses in people who inject drugs have fallen by more than 90% since the peak of the epidemic in 1996. This success has been achieved, Wood said, through a combination of community empowerment, harm reduction, treatment for addictions and universal access to HIV treatment and care. Nonetheless, the criminalisation and marginalisation of people who use drugs remained major obstacles.

“The success of treatment as prevention in injecting drug users in Vancouver has been phenomenal,” his colleague Professor Julio Montaner said in another session. “The reason why it’s working so well is because there is a synergy between the needle exchange, the supervised injection site, the methadone programme and the treatment as prevention.”

He acknowledged that infections have not fallen so far in men who have sex with men. For this group, there aren’t other highly effective interventions to provide together with treatment as prevention, he suggested.

The treatment cascade in people who inject drugs

In many parts of the world, people who inject drugs have poor access to health services and have not fully benefited from HIV treatment. But MJ Milloy of the British Columbia Centre for Excellence in HIV/AIDS outlined improvements in the local treatment cascade for people who inject drugs in recent years. In 2006, 30% of those in care were taking treatment and had an undetectable viral. By 2012, the figure had risen to 71%.

Considerable efforts have been made to engage drug users with HIV and harm reduction services, which are always free of charge for those who need them.

The data come from the ACCESS cohort of people living with HIV who inject drugs in Vancouver. A series of analyses from this cohort presented to the conference shows the importance of opioid substitution therapy and social factors in making progress along the HIV treatment cascade.

This ongoing prospective observational cohort began in 1996 and currently has over 800 people in it. Two-thirds are men, the average age is 43, three-quarters are homeless or in unstable housing, two-thirds live in Vancouver’s Downtown Eastside (an area with many social problems), 15% have recently been incarcerated, 17% inject heroin daily and 36% smoke crack daily.

One analysis examined how long it took members of the cohort to start treatment after being diagnosed with HIV, and the factors that delayed or facilitated this. Individuals who were taking methadone as opioid substitution therapy tended to start treatment promptly. People who generated income in ‘informal’ ways (selling sex, dealing drugs, through crime, begging, etc.) had a slower uptake of treatment, as did people who had been in prison. But there was no association between drug-using practices and slower uptake of treatment.

The next analysis looked at adherence, specifically transitions from poor adherence to good adherence, or from good to poor adherence. Once again, taking methadone as opioid substitution therapy promoted good outcomes. Continuing to inject drugs, recent incarceration, recent homelessness, sex work, and already having a low CD4 cell count made it harder to achieve good outcomes.

Just as social factors can be barriers to good treatment outcomes, the final analysis from the cohort suggested that treatment success is associated with subsequent social benefits. People who achieved optimal adherence to HIV treatment were more likely than others to cease to earn money in informal ways and were also more likely to transition out of homelessness. They also appeared to be more likely to start a romantic relationship, although this wasn’t quite statistically significant.

The at times controversial Sydney supervised injecting centre celebrates its 21st anniversary, without a single death from overdose on the premises. Since its opening, it has supervised 1,232,951 drug injections, and made 20,420 referrals to health and social services.
Cosmos
22 Sep 22
Harm reduction

People who receive opioid substitution therapy to manage drug addiction are more likely to be on antiretroviral treatment and achieve an undetectable HIV viral load, according to study findings published in the journal AIDS.
POZ
15 Sep 22
HIV & criminal law

A draft law on compulsory HIV testing of sex workers, men who have sex with men and drug users is under discussion in Uzbekistan. They would reportedly be detected during “special preventive operations”.
HIV Justice Network
2 Sep 22
More editors' picks