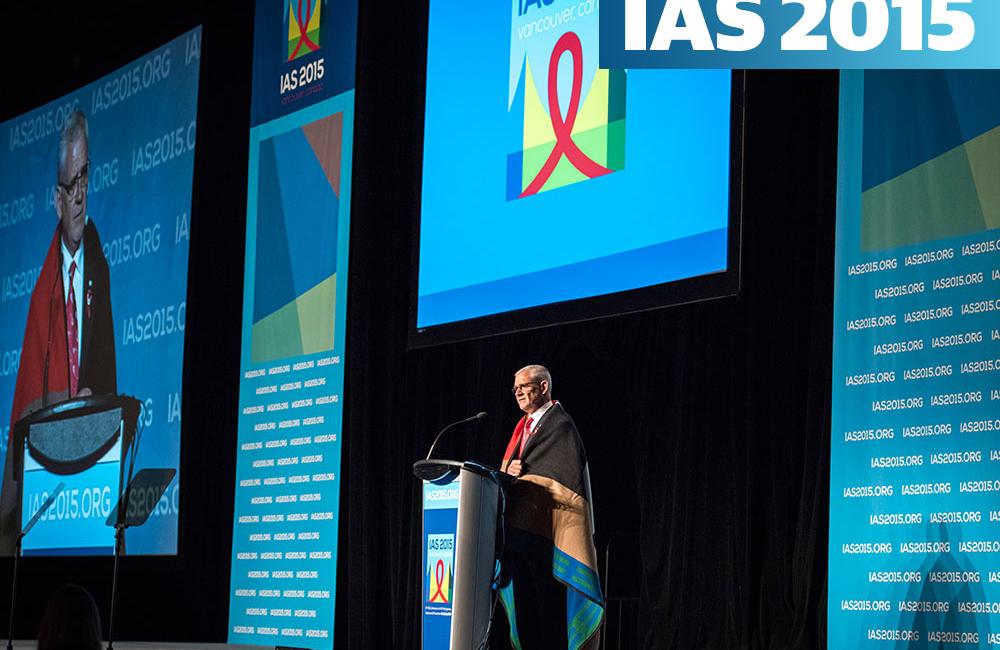 Conference co-chair, Julio Montaner, at the Opening Session of IAS 2015, with a Native blanket received as a gift. Photo ©Steve Forrest/Workers' Photos/IAS
This article is more than 8 years old. Click here for more recent articles on this topic

Leading figures in the HIV response have endorsed a call for immediate access to antiretroviral therapy for all people upon diagnosis with HIV, on the opening day of the 8th International AIDS Society Conference on HIV Pathogenesis, Treatment in Prevention (IAS 2015) in Vancouver on Sunday.

The Vancouver Consensus Statement has been endorsed by leaders of major agencies including the Global Fund to Fight AIDS, Tuberculosis and Malaria, the US President's Emergency Plan for AIDS Relief (PEPFAR) and UNAIDS, and is intended to place pressure on donors and governments to support expanded treatment and prevention.

“Let this be the conference where the question of when to start treatment stops being a scientific question and starts being a question of finance and political will.” Professor Chris Beyrer

The statement calls for immediate access to antiretrovirals and for access to pre-exposure prophylaxis for those at high risk of HIV exposure, and urges rapid progress towards the implementation of new scientific evidence.

“Let this be the conference where the question of when to start treatment stops being a scientific question and starts being a question of finance and political will,” Professor Chris Beyrer of Johns Hopkins University told the opening plenary of the conference. “This conference will be a line in the sand in the HIV response.”

“There is no discussion any more, the science is in […] IAS 2015 will finally complete a body of irrefutable evidence to make treatment as prevention the global standard of care,” Professor Julio Montaner of the University of British Columbia Centre of Excellence in HIV said, welcoming delegates to Vancouver.

Vancouver played host to a major turning point of the HIV epidemic in 1996, when the International AIDS Conference in the city heard results of major studies showing that three-drug antiretroviral therapy, or highly active antiretroviral therapy (HAART), provided the first truly effective treatment for HIV.

Professor Montaner reminded delegates how much has been achieved since 1996, not least extending access to treatment to 15 million people worldwide in 2015.

“Political leaders of the world, you are with us or against us,” Prof. Montaner said.

Michel Sidibe, Executive Director of UNAIDS, expressed concern regarding donor commitment to funding an expanded HIV response. UNAIDS estimates that a further $8 to $12 billion is needed each year until 2030 to drive down new infections through expansion of antiretroviral treatment and combination HIV prevention. Sidibe warned “If we don’t have the resources I think we will have difficulty in sustaining our gains.”

A webcast of this session is available on the conference YouTube channel.