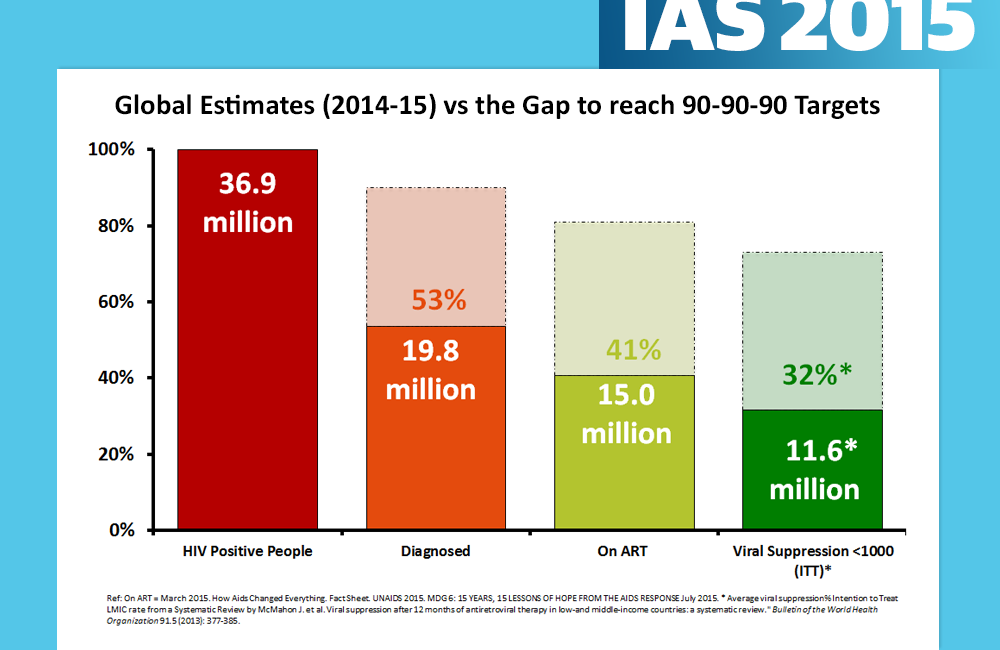 Image from presentation by Jacob Levi, Imperial College London, at IAS 2015.
This article is more than 8 years old. Click here for more recent articles on this topic

Global analysis of HIV treatment cascades – the proportions of people diagnosed with HIV, in care, on treatment and virally suppressed – shows that some of the world’s richest countries are still far short of achieving the UNAIDS 90-90-90 target, research from Imperial College London and Chelsea and Westminster Hospital shows. Progress is worst in Eastern Europe, where most countries lag behind average performance in sub-Saharan Africa on every indicator.

The findings were presented by Jacob Levi on Monday at the Eighth International AIDS Society Conference on HIV Pathogenesis, Treatment and Prevention (IAS 2015) in Vancouver, Canada – described by numerous speakers this week as the '90-90-90' conference.

How far are countries from achieving these targets? In some cases fairly close, but in others, the gap is enormous.

Research conducted by a team from Imperial College and St Stephen's AIDS Trust, Chelsea and Westminster Hospital, London, and the Cantonal Hospital of St. Gallen, Switzerland, updating a previous survey presented at the 2014 Congress on Drug Therapy in HIV Infection in Glasgow, shows that Switzerland, Australia and the United Kingdom have the highest proportion of people living with HIV with undetectable viral load. In each of these countries, over 60% of the estimated population of people living with HIV have undetectable viral load, compared with 30% in the United States.

The proportion of the estimated population of people living with HIV who had been diagnosed varied from 86% in the United States and Australia to 71% in Canada, 51% in sub-Saharan Africa, 45% in Colombia and 44% in Ukraine. Many countries were identified as having breakpoints in HIV diagnosis, indicating the global importance of improving rates of HIV diagnosis.

Retention and linkage to care are difficult to compare due to lack of data in some countries and a lack of a common definitions of linkage and retention in care.

UNAIDS aims to move countries towards achieving viral suppression in 73% of all people living with HIV by 2020. Switzerland, Australia, the United Kingdom, Denmark and the Netherlands are well on their way to achieving this target; in each case, easily attainable improvements in the rate of diagnosis or treatment initiation should allow these countries to reach the goal.

Other countries that perform well in some areas are still lagging far behind when it comes to viral suppression. France reports that only 52% of people living with HIV are virally suppressed (compared to 61% in the United Kingdom and 52% in Rwanda), while 35% in British Columbia, Canada, 32% in sub-Saharan Africa and 30% in the United States are virally suppressed. Once again, rates of viral suppression are extremely low in Eastern Europe.

Monitoring and comparison of treatment cascades will be an important tool for benchmarking national and regional performance, and for accountability, speakers at the conference agreed.