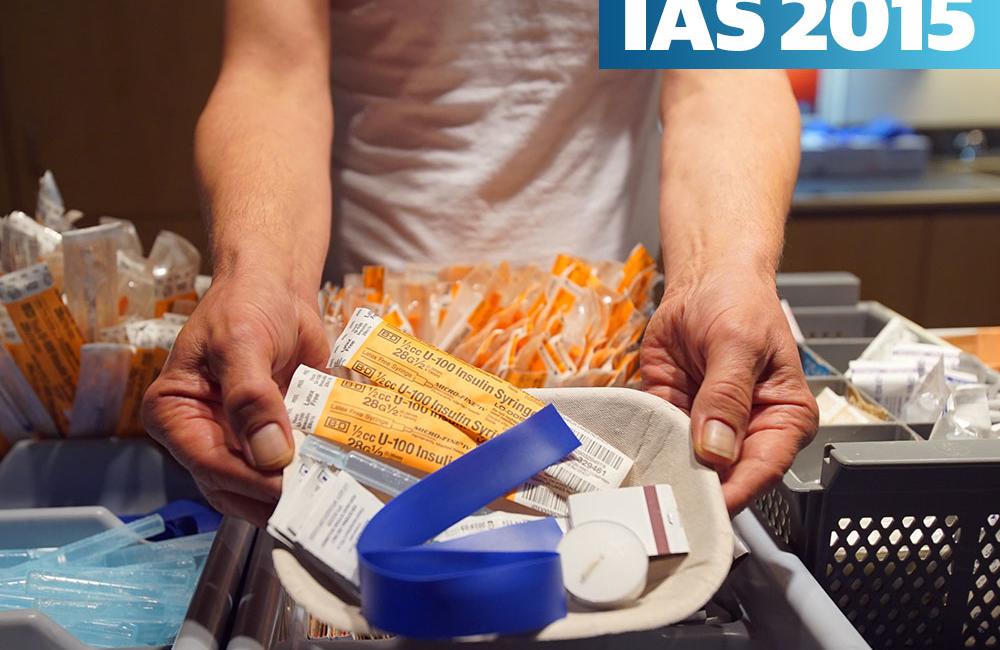 A cluster randomised trial in Ukraine has shown that a peer education project reduced new HIV infections in people who inject drugs by 41%. Working with individuals who had an exceptionally high risk of HIV (each year one in three became HIV positive), the intervention is thought to have worked by helping individuals make more use of needle exchange programmes.

Robert Booth of the University of Colorado presented the results to the Eighth International AIDS Society Conference on HIV Pathogenesis, Treatment and Prevention (IAS 2015) in Vancouver, Canada, last week.

Over the last fifteen years, Ukraine has experienced a dramatic rise in HIV rates, with new diagnoses doubling each year. The epidemic is concentrated in people who inject drugs but sexual transmission is now also an important factor.

The hardest-hit part of the country is the south-east, where the study was conducted. In the regions of Odessa, Nikolayev and Donetsk just under half of people who inject drugs already have HIV. Of note, Donetsk has since come under the control of pro-Russian separatists, leading to a curtailment of harm reduction services for people who inject drugs.

The injecting practices in Ukraine may have fuelled the spread of HIV. A frequently used drug is liquid poppy straw, which may be bought in pre-loaded syringes from dealers, who are often injectors themselves, or from dealers who allow users to extract it from jars directly into their own syringes. In a single day, many recycled needles and syringes can be used to extract the liquid from the jar. Another popular drug, pseudoephedrine, is typically injected in the company of other users, involving multi-person use of both the drug solution and syringes.

The criminalisation and police harassment of people who use drugs further exacerbates risk, for example by encouraging people to inject hurriedly. People who inject drugs in Ukraine are a highly stigmatised and marginalised population.

For the study, people in recovery worked as outreach workers. They contacted and recruited 1205 HIV-negative people who inject drugs.

Half were randomised to receive the control intervention: a counselling and education programme that was broadly similar to that typically proposed by the US National Institute on Drug Abuse.

The other half received the counselling and education, plus a peer-based intervention. This involved being trained to recruit and educate their peers on harm reduction practices. The training, led by the outreach workers, was scripted and involved role-play exercises. Each of the ‘peer leaders’ who had received the training was asked to bring two further drug users they knew to the programme. The intervention was based on ideas of social learning, social identity, social norms and social diffusion.

Efforts were made to ensure that all of those recruited, both the peer leaders and those they recruited, were still injecting drugs (rather than, for example, being ex-users). This was verified through urine analysis and checking the skin for track marks.

Three-quarters of those recruited were men, their average age was 31 and they had been injecting for around ten years each.

The incidence of HIV was exceptionally high, suggesting that the recruitment methods had been unusually effective in engaging those who need HIV prevention interventions the most. During one year of follow-up, 31.8% of initially HIV-negative people who received the control intervention of counselling and education became HIV positive.

Results were significantly better in those who also received the peer-based intervention, although infections remained disturbingly frequent. During the year of follow-up, 18.4% became HIV positive.

After adjustment for other factors that could influence the results, acquiring HIV was associated with older age and injecting more frequently. A counter-intuitive finding was that people who had multiple sexual partners were less likely to acquire HIV, but Dr Booth said that this has been frequently found in Ukrainian studies. He said that people with multiple partners may be more likely to use condoms.

Moreover, those receiving the intervention were 41% less likely to acquire HIV (95% confidence interval 21-56%). They reported 53% and 17% more use of needle exchange programmes at six and twelve months respectively.

Tetiana Deshko of the International HIV/AIDS Alliance in Ukraine told the conference that harm reduction interventions in some parts of Ukraine, with the support of international donors, had achieved reductions in HIV incidence among people who inject drugs. But now the political instability and Russian influence, especially in the Donetsk region, threatened the human rights and public health-based approaches that had been introduced.

International advocacy is needed to support services, including harm reduction and opioid substitution therapy, in this war-torn region, she said. Previous conflicts such as those in Transnistria (Moldova) in 1989 and Abkhazia (Georgia) in 1992 also created problems with access to harm reduction, but local activists created innovative ways to deliver services which could be learned from now.