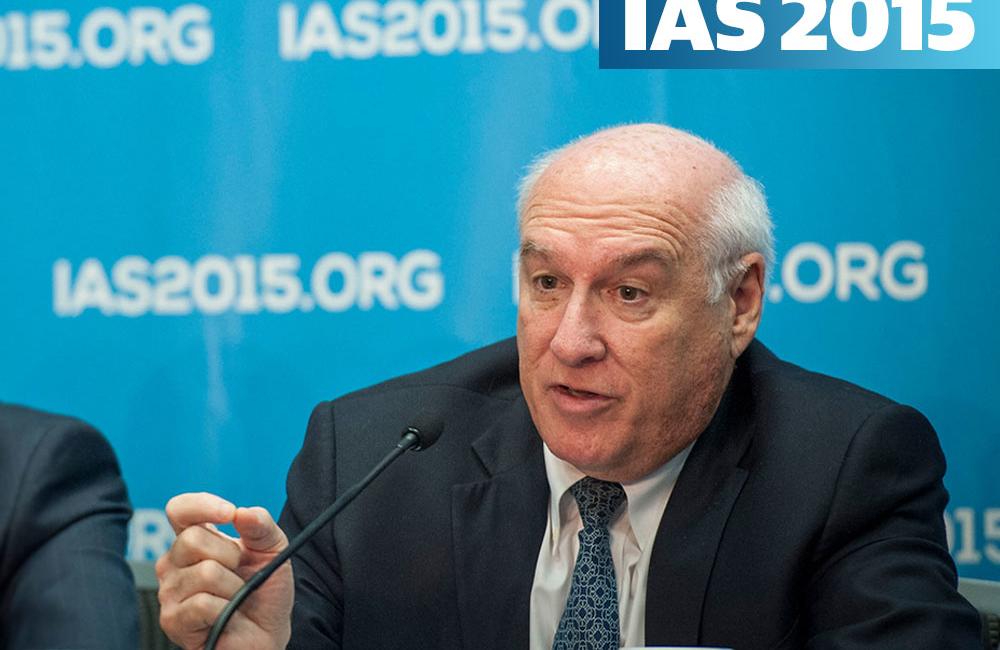 Final follow up of the HPTN 052 study of treatment as prevention shows no evidence of HIV transmission from people with fully suppressed viral load to their partners, four years after the first results from the study demonstrated that early HIV treatment reduced the risk of HIV transmission by 96%. These results were presented by Professor Myron Cohen at the Eighth International AIDS Society Conference on HIV Pathogenesis, Treatment and Prevention (IAS 2015) in Vancouver, Canada, on Monday.

Describing the results as “the final word” from HPTN 052, Professor Cohen, of the University of North Carolina at Chapel Hill, presented a final intent-to-treat analysis of the study, which demonstrated in 2011 that early antiretroviral treatment greatly reduced the risk of HIV transmission to serodiscordant partners. The study compared the rates of transmission between two study arms: a deferred treatment arm, in which people diagnosed with HIV started treatment at a CD4 count of 250 cells/mm3 or if they developed an AIDS-defining illness prior to reaching this threshold; and an immediate treatment arm, in which people with CD4 cell counts in the range 350-550 cells/mm3 started treatment immediately. The interim analysis showed a 96% reduction in the risk of HIV transmission.

The final intent-to-treat analysis reported on 1,763 couples, of which 1,171 (66%) remained in follow up (603 of 886 in the immediate treatment arm and 568 of 877 in the deferred treatment arm). The study accumulated 9822 person-years of follow up of HIV-positive participants.

A total of 28 infections that could be genetically linked to the index partner took place during the study up until the time of the interim analysis in 2011, one in the early treatment arm and 27 in the deferred arm. This represented a 96% risk reduction.

After the interim analysis and the offer of antiretroviral therapy to all participants in the deferred treatment arm, a total of nine genetically linked infections occurred: two in the early arm and seven in the deferred arm. This represented a 72% risk reduction, but overall, the risk reduction associated with early treatment was 93%. Professor Cohen said that intent-to-treat analysis represents a conservative estimate of efficacy, pointing to the fact that infections which occurred after treatment had been started had occurred when viral load was not fully suppressed.

Overall, eight infections occurred after the index partner had started treatment: four just before or very soon after starting treatment, and four after virological failure of treatment. Susan Eshleman of Johns Hopkins University presented results of a detailed analysis of these transmissions, using blood tests and genetic analysis, to pinpoint when they occurred.

Apart from antigen-antibody testing and viral load testing, the analysis also used techniques of genetic analysis to determine how much the virus in the infected partner had evolved compared with the virus of the index partner, in order to estimate the timing of transmission. In each of the four cases transmission was estimated to have occurred before viral suppression had been achieved in the index partner. The time of diagnosis varied from 35 to 84 days after the index partner started treatment in these four cases, and infection is estimated to have occurred no later than 17 days after the index partner started treatment, underlining the importance of counselling about the risk of transmission during the first few months of treatment. A separate poster presentation by Jessica Fogel showed that the cumulative probability of viral suppression in the index partner was 46.4% after 1 month, 78.5% after 3 months and 89.4% after 6 months, and a longer time to viral suppression was associated with a higher baseline viral load.

Professor Cohen noted that even though the results were explained to all study participants and providers at the time of the study unblinding in 2011, at which time all participants in the deferred treatment arm were offered antiretroviral treatment, 16% declined to start treatment during the first year, 7% still declined treatment after the second year, and small handful of participants – 2% – were still declining treatment at the study’s end. Professor Cohen said that participants usually explained their reluctance to start treatment by reference to their CD4 count, and did not see it as an emergency – a culture of CD4 thresholds which will need to be changed among both patients and providers, he commented.

Genetic analysis showed that 37% of all infections that occurred in the study were unlinked; in other words, the source was someone other than the primary partner enrolled in HPTN 052. In settings with a high prevalence of HIV, this underlines the fact if the primary relationship is not exclusive, the uninfected partner remains at high risk if they are having sex outside this relationship, and the need for combination prevention interventions at community level which can reduce this risk.

“Antiretroviral treatment is a durable means of preventing HIV transmission in heterosexual couples,” Professor Cohen told a press conference, and he told the conference “we see no reason why it should not be effective” for men who have sex with men, and advised delegates to watch out for longer-term follow-up from the PARTNER study, which reported no transmissions between men where the HIV-positive partner had fully suppressed viral load in an interim analysis released in 2014.