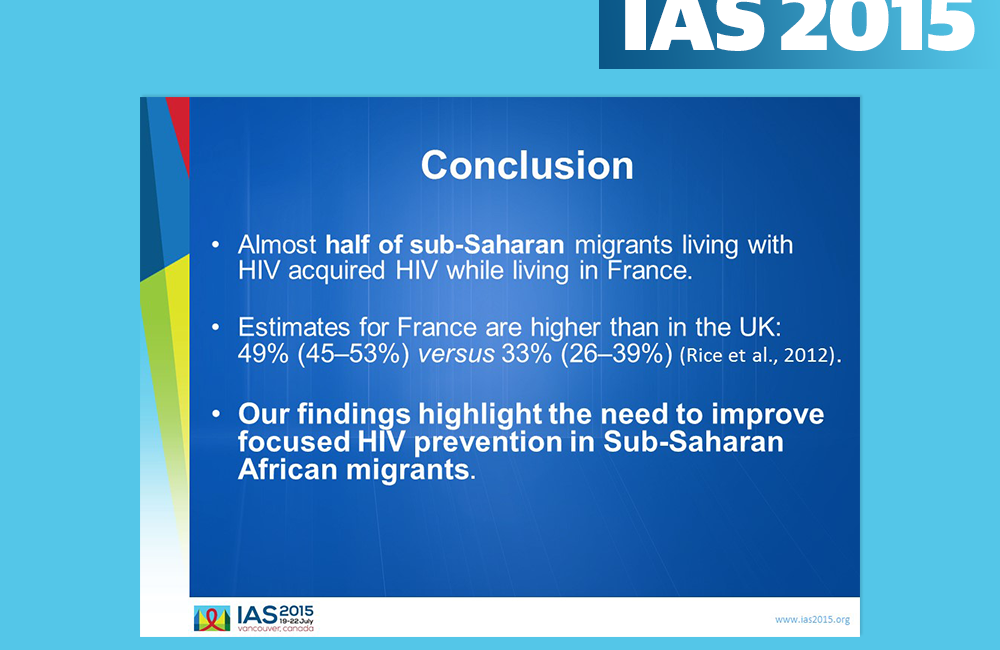 Image from presentation by Julie Pannetier at IAS 2015.

Between a third and a half of African people living with HIV in France probably acquired HIV after they left Africa, according to a study presented to the Eighth International AIDS Society Conference on HIV Pathogenesis, Treatment and Prevention (IAS 2015) on Wednesday.

Until recently, it had generally been assumed that African people who were diagnosed with HIV while living in European countries had acquired HIV before migration. Most come from countries where the prevalence of HIV is very high.

But epidemiologists in the UK found that they could compare the date at which a migrant arrived in the UK with the person’s CD4 cell count at the time of diagnosis (an indication of how long they likely had the infection), in order to estimate where the person was living when they acquired HIV. They calculate that around a third of African people diagnosed with HIV in the UK seroconverted after migration.

If transmission mostly occurs before migration to Europe, the priority for European health services is testing and diagnosis. However, if transmission occurs while living in Europe, a broader prevention response is appropriate.

In France, migrants from sub-Saharan Africa are disproportionately affected by HIV, making up a quarter of all people living with HIV in the country.

For the new analysis, researchers recruited 1031 African migrants who were attending HIV clinics in the country. Life-history data were collected in interviews and medical records were consulted.

For this analysis, 133 people who had been diagnosed before arriving in France were excluded.

CD4 cell counts were examined for the remaining 537 people, with two different sets of assumptions about how the data should be interpreted.

Based on a conservative assumption, 35% of all migrants diagnosed in France acquired their infection while living in the country. Based on less restrictive assumptions, 49% acquired HIV in France.

Men, younger people and those who had lived in France for longer were more likely to have acquired their infection after migration. For reasons that are unclear, Malians were much more likely to acquire HIV in France than people coming from Cameroon or Ivory Coast.

The conference also heard evidence from Seattle (King County) of African people acquiring HIV while living in the United States. Phylogenetic analysis of 112 samples from African migrants found that 34 samples could be linked with samples of other people living in the Seattle area, suggesting that transmission occurred locally. Some of these transmission clusters only included individuals of African descent living in the local area.

Undocumented HIV Carriers in Israel Receive Treatment 'Worse Than Third World Countries,' if Any at All

Hundreds of undocumented HIV carriers in Israel receive inadequate treatment and outdated medications that sometimes cause severe side effects. They are only admitted to the Health Ministry’s treatment program only after their condition deteriorates, and their immune system is already dysfunctional.
Haaretz
7 Jun 21
Migrants, refugees & displaced people

A journey across two continents and four countries to some of Latin America’s most dangerous places reveals a humanitarian crisis that can no longer be ignored.
Out
6 Apr 21
Migrants, refugees & displaced people

Lambda Legal and Immigration Equality plan to sue the Trump administration over a new policy they say will make it “virtually impossible” for LGBTQ+ or HIV-positive refugees to gain asylum in the U.S.
Advocate
14 Dec 20
Migrants, refugees & displaced people

Australia: People who are ineligible for Medicare to gain access to HIV treatment and care

The Commonwealth Minister for Health, Greg Hunt, has signalled an intention to work with State and Territory Governments to secure a National Partnership Agreement that will give residents of Australia who are living with HIV and ineligible for Medicare, access to HIV treatment and care in 2021. Currently, overseas students, workers, and others on temporary visas must pay full price for their healthcare and to buy the antiretroviral medications they rely on to suppress HIV.
NAPWHA
1 Dec 20
More editors' picks