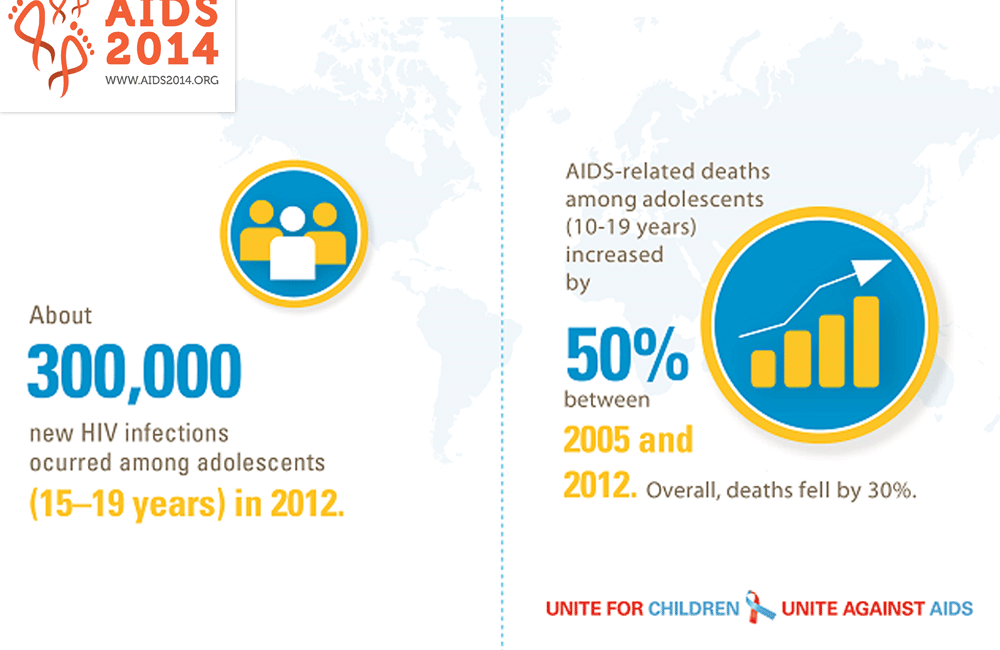 Image courtesy of UNICEF.
This article is more than 8 years old. Click here for more recent articles on this topic

While new HIV infections have declined among children, adolescents and adults since 2000, HIV-related deaths have risen sharply among adolescents, especially 15- to 19-year-old males, Tyler Porth of UNICEF told delegates at the 20th International AIDS Conference (AIDS 2014) in Melbourne on Monday.

In spite of the significant reductions in new infections among children and adolescents, large and increasing numbers of children who acquired HIV perinatally are surviving into adolescence, often with lower CD4 cell counts and poorer survival.

The disparity is due to a greater proportion of adolescent boys living with HIV acquired perinatally, Tyler Porth told delegates. These disparities are often exacerbated in some settings because of adolescents’ poorer access to health services including testing and treatment, he added.

These findings highlight the considerable difficulties of transitioning from paediatric to adult care facilities with important implications for HIV and AIDS programmes and the urgent need to prioritise adolescents. A tailored and adolescent-sensitive approach is critical if the unique needs of adolescents are to be adequately addressed.

Scale-up of services aiming to prevention perinatal transmission (transmission which occurs during pregnancy, birth or breastfeeding) over the past decade has resulted in new vertical infections (from mother to baby) declining by over half between 2001 and 2013. During this time, efforts have also been made to improve access to antiretroviral therapy (ART) for children. However, as of 2013, only 24% of children living with HIV were on ART. Declines in AIDS-related death among children mean more children are surviving into adolescence.

The difficulties of reaching and retaining adolescents in care are recognised. A dearth of adolescent-friendly services and absence of incentives to attract adolescents to care contribute to the problem. Compounding the problem further is the fact that, frequently, adolescents are overlooked in national and global AIDS strategies.

Among most age groups the AMR began decreasing globally around 2005 when ART was scaled up, but not among adolescents.

Having a better understanding of the factors affecting these trends and how the adolescent epidemic was maturing so differently from that seen in younger children and adults would provide information to more precisely target HIV and AIDS programming for adolescents.

The impact of progress in preventing mother-to-child transmission (PMTCT) on the number of adolescents acquiring HIV perinatally can take one to two decades. Many of those who acquired HIV perinatally during the period 2000 to 2005, when over half a million children were infected annually, are only now entering adolescence.

Increased ART access for children means more children are surviving into adolescence. Even without ART, an estimated third of infants are slow progressors. In sub-Saharan Africa, an estimated 20 to 30% of these children have a ten-year survival rate.

The annual AMR, while similar among males and females of all ages, differed significantly between adolescent boys and girls aged 15 to 19. In this age range, AMR decreased significantly among girls while remaining constant among boys; a disparity that has been increasing since 1996. Each year since 2006 adolescent boys living with HIV, aged between 15 and 19, have been 80% more likely to die compared to girls living with HIV of the same age.

The increase in AMR among boys aged 15 to 19, relative to girls of the same age, may be because 65% of global adolescent HIV infections are in girls. A greater proportion of adolescent girls living with HIV have acquired HIV more recently, so have a lower risk of mortality, he noted.

Tyler Porth concluded that the adolescent HIV epidemic is unique and presents a unique set of epidemiological, social and programmatic challenges.

Prioritising and meeting the needs of adolescents living with HIV in HIV and AIDS programming is critical to facilitate a healthy transition into adulthood in which they will survive and thrive.

Researchers Use TikTok To Explain And Spread HIV Awareness

Social media has become a new platform for the public to learn more and understand HIV, thanks to a Knowledge Translation project.
Star Observer
5 Sep 22
PrEP

Why are some young women at risk of HIV saying no to PrEP?

Caregivers of adolescents with perinatally acquired HIV are at high risk of depression. This is according to a study by mental health experts at the University of Cape Town.
News 24
18 Aug 22
Child developmental issues