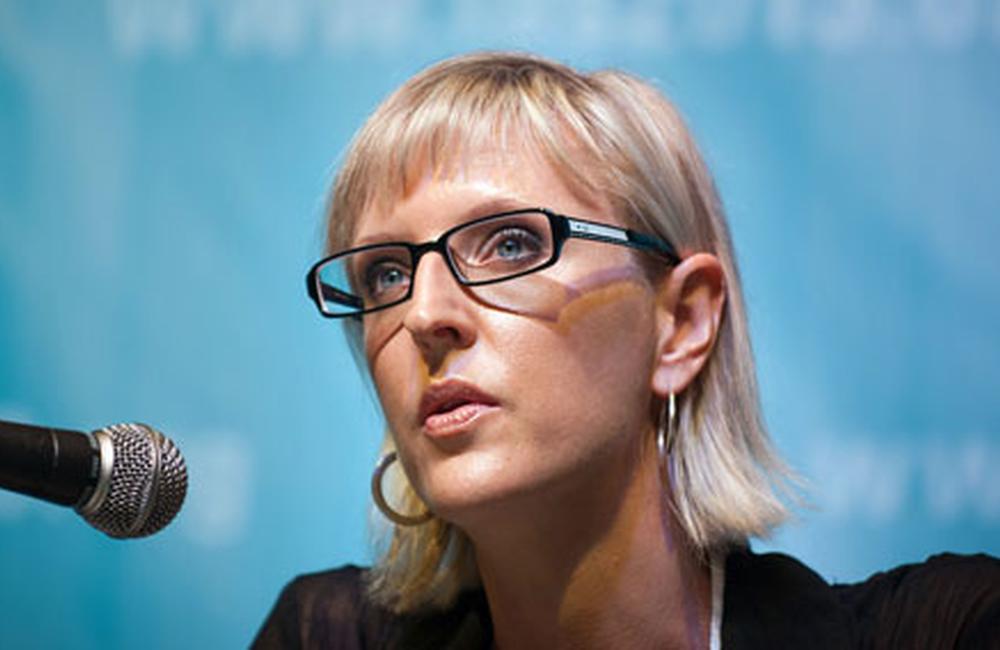 Rebekah Puls of the Kirby Institute in Sydney presenting at IAS 2013. Photo©International AIDS Society/Steve Forrest/Workers' Photos.
This article is more than 9 years old. Click here for more recent articles on this topic

Lowering the dosage of efavirenz (Sustiva or Stocrin) from 600 to 400mg in an antiretroviral regimen did not compromise efficacy, a finding that has the potential to substantially reduce treatment cost in all regions of the world, according to data from the ENCORE1 study presented on Wednesday at the 7th International AIDS Society Conference on HIV Pathogenesis, Treatment and Prevention in Kuala Lumpur.

The non-nucleoside reverse transcriptase inhibitor efavirenz is among the most widely used antiretroviral agents, and is a preferred component of first-line therapy in HIV treatment guidelines from Europe, the US, and the newly updated World Health Organization recommendations released at the conference.

Rebekah Puls of the Kirby Institute in Sydney and colleagues conducted a study to assess whether efavirenz would perform comparably at a lower dose – as suggested by observational and phase 2 study data – which could lower the cost of antiretroviral therapy and allow more people to be treated.

ENCORE1 was a randomised, double-blind, non-inferiority trial designed to compare the safety and efficacy of reduced-dose versus standard-dose efavirenz, used in combination with two nucleoside/nucleotide reverse transcriptase inhibitors (NRTIs) for first-line HIV treatment. The study was funded by the Bill and Melinda Gates Foundation.

The study randomised 636 treatment-naive people with HIV in 13 countries in Europe, Africa, the Asia-Pacific region and Latin America. Africans, Asians and Caucasians each accounted for approximately one-third of participants. About two-thirds were men and the mean age was 36 years. The average CD4 count was low, at just 99 cells/mm3, and three-quarters had fewer than 100 cells/mm3. One-third had high viral load (>100,000 copies/ml at baseline).

Participants were randomly assigned to receive either the standard 600mg dose or a reduced 400mg dose of efavirenz once daily plus tenofovir and emtricitabine (the drugs in the Truvada fixed-dose combination pill). People in the standard-dose arm took three 200mg efavirenz pills, while those in the 400mg arm took two efavirenz pills plus a matching placebo pill.

The 400mg and 600mg doses of efavirenz demonstrated similar efficacy in an intent-to-treat analysis at 48 weeks, with 94 and 92%, respectively, suppressing HIV RNA below 200 copies/ml. Virological response rates were even higher – 98 and 97%, respectively – in a per protocol or 'as-treated' analysis. This small and non-significant difference between the treatment arms indicates that 400mg efavirenz was non-inferior to the standard dose.

Puls said the study used the rather high 200 copies/ml cut-off because some countries do not routinely use more sensitive viral load tests. However, she noted, lower-dose efavirenz was also non-inferior when looking at viral load >50 copies/ml.

The mean CD4 cell count at 48 weeks was greater in the 400mg compared with the 600mg arm, with the lower-dose arm gaining an additional 25 cells/mm3 on average.

Both efavirenz doses were generally safe and well tolerated. The overall number and severity of adverse events were similar in the two dose groups. Approximately half in both arms experienced mild-to-moderate (grade 1 to 2) adverse events, falling to 7% with severe adverse events.

There were, however, significantly fewer side-effects attributable to efavirenz – in particular, central nervous system symptoms – in the 400mg arm compared with the 600mg arm (37 vs 47%, respectively), and significantly fewer people taking the lower dose discontinued treatment due to adverse events (2 vs 6%).

The researchers concluded that "400mg efavirenz was non-inferior to 600mg efavirenz when combined with Truvada in a treatment-naive, HIV-infected adult population over 48 weeks".

Based on these findings, they suggested that the 400mg dose of efavirenz should be considered for initial antiretroviral therapy in routine clinical practice. Doing so would reduce cost by about one-third, or approximately $50USD at current prices in resource-limited settings, according to Puls. This consideration takes on added importance given the new WHO guidelines recommending treatment for everyone with a CD4 count below 500 cells/mm3. She said that testing the lower dose in pregnant women is next on the agenda.

Widespread adoption of the 400mg dose would "lower the cost of treatment and permit better use of scarce resources in global health budgets", Puls told reporters. "This could mean that millions more people could receive life-saving treatment for the same amount of money."