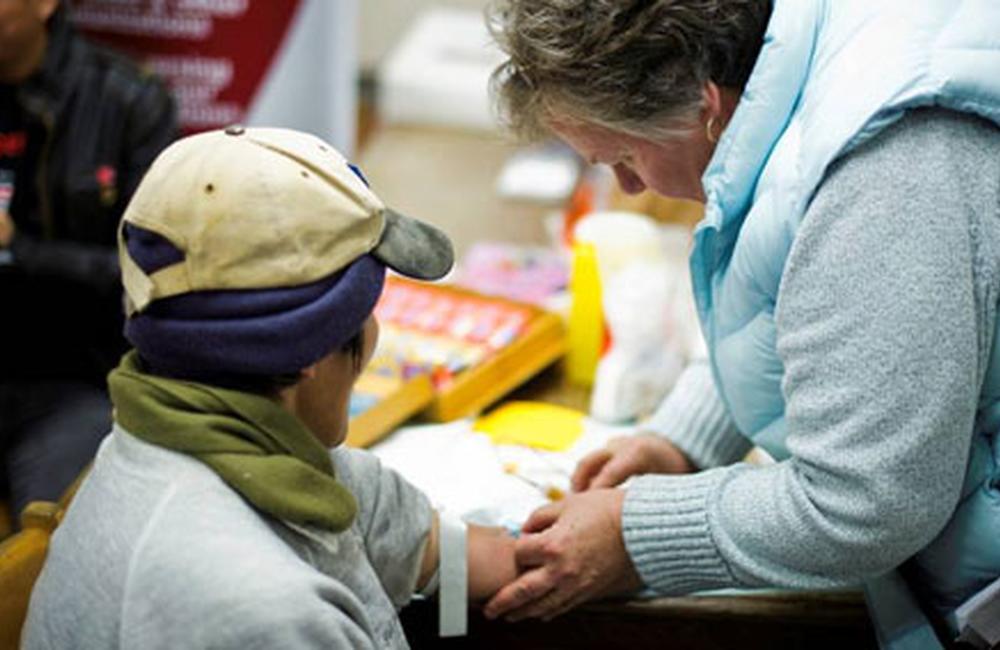 HIV testing in Vancouver. Image provided by BC Centre for Excellence in HIV/AIDS (http://cfenet.ubc.ca/).
This article is more than 9 years old. Click here for more recent articles on this topic

An HIV prevention intervention in which young people who had tested negative for sexually transmitted infections were given lottery tickets and had the possibility of winning a cash prize reduced the number of HIV infections by 39% in young women, researchers reported to the 7th International AIDS Society conference (IAS 2013) this week. However, the intervention did not have any impact on young men in this trial in Lesotho.

Evaluations of HIV prevention interventions which measure biological outcomes (such as new infections) rather than improvements in knowledge or attitudes, are few and far between. Behavioural interventions which demonstrate an efficacy of this magnitude are even rarer.

The conference also heard that financial incentives have improved HIV testing rates in drug users in a Canadian study.

In recent years, interest in the possibility of influencing health behaviours through conditional cash transfers and other financial incentives has been growing. Aidsmap has reported on discussions of the ethics, feasibility and effectiveness of these approaches at international conferences in 2010, 2011 and 2012.

Lesotho has an exceptionally high prevalence of HIV, especially amongst young people. The study tested the hypothesis that a system of rapid feedback and positive reinforcement, using a lottery scheme as an incentive to reduce risky sexual behaviour, could be used to promote safer sex and reduce HIV incidence in young people.

All participants received testing for sexually transmitted infections (STIs), STI treatment if necessary, and counselling every four months for two years. All participants were tested for HIV at baseline and after 16, 20 and 24 months.

If a participant in one of the intervention arms had tested negative for syphilis and Trichomonas vaginalis he or she received a lottery ticket. If the participant was in the high-value arm of the study, it was worth 1000 malotis or South African Rand, approximately USD 100). If he or she was in the low-value arm, the lottery ticket was worth 500 malotis or South African rand, USD 50).

A lottery was organised in each village, every four months. There were two male winners and two female winners from each village. With around 50 to 70 entrants per village, individuals had a relatively good chance of winning, but only those who had remained STI-free could enter.

The evaluation assessed the effectiveness of the programme in reducing new HIV infections after two years.

In young men, the programme had no impact. Compared to men in the control arm, those taking part in the lottery were just as likely to acquire HIV (adjusted odds ratio 1.25, 95% confidence interval 0.67-2.35).

But the intervention was effective for young women, reducing infection rates by 33% if we consider both lottery arms together (adjusted odds ratio 0.67, 95% CI 0.52-0.86).

The conference also heard results of an intervention in Vancouver, Canada to improve engagement of drug users in HIV testing and post-test follow-up. It is generally more feasible to use financial incentives to facilitate a discrete, time-limited health behaviour such as testing or vaccination, in contrast to sustained sexual behaviour change, as seen in Lesotho.

Eligible participants were drug users (including heroin, crystal methamphetamine etc., but not marijuana) who were either untested or had previously been diagnosed but had dropped out of care. Three hundred and one were randomised to either be offered standard counselling and testing, or $10 following blood sampling and a further $15 if they actually came back for their results.

Far more individuals were tested (100%) and came back for results (83%) in the intervention arm than in the control arm (32 and 11% respectively). The prevalence of HIV and newly diagnosed hepatitis C was high in those taking part (10 and 17% respectively).

However, the study results do raise some questions. The theory of financial incentives is that they should help people to achieve outcomes that they desire but might struggle to achieve otherwise. With only a third of participants in the control arm choosing to test (never mind get their results), it appears that some participants were only in it for the money. Moreover, the benefit of HIV diagnosis lies in receiving HIV treatment (and facilitating behaviour change), so future studies should assess engagement with medical care, rather than just getting test results.

View details of the conference session, Tomorrow Starts Today: HIV and Adolescents, in which this abstract was presented, including some presentation slides, on the conference website.

View details of the conference session, Prevention among People Who Inject Drugs: What Works, in which this abstract was presented, including some presentation slides and webcasting, on the conference website.