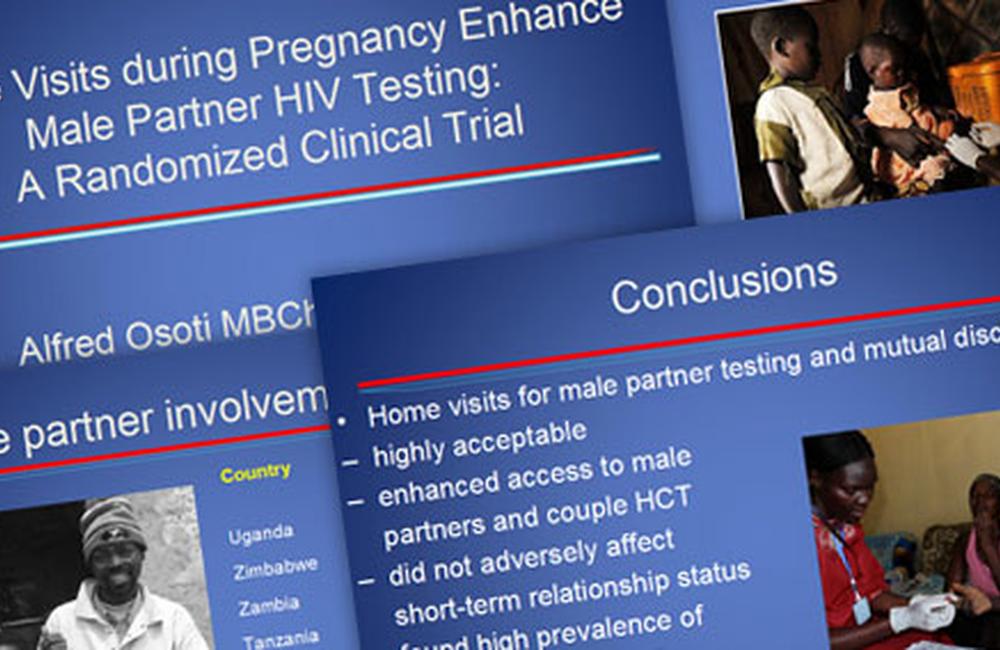 Images from the presentation of Dr Alfred Osoti.
This article is more than 9 years old. Click here for more recent articles on this topic

A randomised controlled trial in Kenya has found that home visits immediately after a woman’s appointment at the antenatal clinic increased the numbers of male partners who were tested for HIV, according to a study presented to the 7th International AIDS Society conference (IAS 2013) in Kuala Lumpur on Tuesday.

Women reported greater satisfaction with their relationship and were no more likely to experience domestic violence.

HIV testing in antenatal programmes means that women are often diagnosed sooner than men and there is interest in using the opportunity of antenatal care to bring male partners in for voluntary counselling and testing. Amongst women with HIV, partner testing is associated with better engagement with prevention of mother-to-child transmission programmes and fewer infant infections.

In addition, partner testing and mutual disclosure could clarify whether one partner is HIV negative and the other HIV positive ('serodiscordant'). Researchers hope that male partner testing could also benefit HIV-negative women, by reducing their risk of subsequent HIV infection.

While interventions in which pregnant women deliver a written invitation for their partners to attend a health facility for voluntary counselling and testing increase the numbers of men who test, fewer than one third of men actually do so.

The strategy of home-based counselling and testing has been shown to be acceptable in African settings and has numerous benefits. Nonetheless, it predominantly reaches individuals, especially women and children.

Dr Alfred Osoti and colleagues at the Universities of Washington and Nairobi therefore designed a study to investigate the strategy of offering women attending antenatal services the possibility of an HIV counsellor immediately accompanying her home in order to offer her partner voluntary counselling and testing. In this randomised study, women in the control arm were given a written invitation to pass on to their partners, asking him to attend for testing.

The study was conducted in Nyanza, the district with the highest prevalence of HIV in Kenya (14%, compared to 6.3%). A significant number of people are unaware of their infection and are often in serodiscordant relationships.

Women taking part in the study were attending their first antenatal visit, without their partner. Women previously diagnosed with HIV and women who did not live with a partner were excluded. Three hundred women were eligible and agreed to participate (just twelve declined).

They were generally young (median 22 years), with limited education (two-thirds had primary education or less), very poor (three-quarters had less than $2 a day) and monogamous (87%). One-quarter had been physically threatened by a male partner in the past six months.

Sixteen per cent of women were diagnosed with HIV at the antenatal clinic.

In the control arm (written invitation), 54 of 150 male partners (36%) attended HIV testing at a health facility.

Among the 21 women in the intervention arm who had just been diagnosed with HIV at the antenatal clinic:

Moreover, 11 women in the intervention arm who tested HIV negative found out that their partner was living with HIV through home-based testing.

As there are concerns that couple testing could increase the risk of intimate partner violence, the researchers assessed this at a follow-up visit six weeks later. In the intervention arm, 16% reported being physically threatened by their partner, compared to 19% in the control arm – a difference that was not statistically significant.

However, a more detailed analysis, looking specifically at situations in which one or both partners was diagnosed with HIV, was not presented. A larger study may be needed to gather reliable data on this issue.

Encouragingly, whereas 28% of women in the control arm reported an improved quality of relationship at the follow-up visit, 67% of women in the intervention arm did so. Receiving a home visit substantially increased the women’s chances of being satisfied with her relationship (risk ratio 2.36, 95% CI 1.79-3.13).

Dr Osoti suggested that this intervention is easy to implement and likely to be generalisable to many other high-prevalence settings. The intervention is highly acceptable, substantially improved rates of partner testing and does not appear to adversely affect the quality of relationships, in the short term at least.

View details of the conference session, Reproductive Health: What’s Hot, What’s Not?, in which these abstracts were presented, including some presentation slides and webcasting, on the IAS conference website.