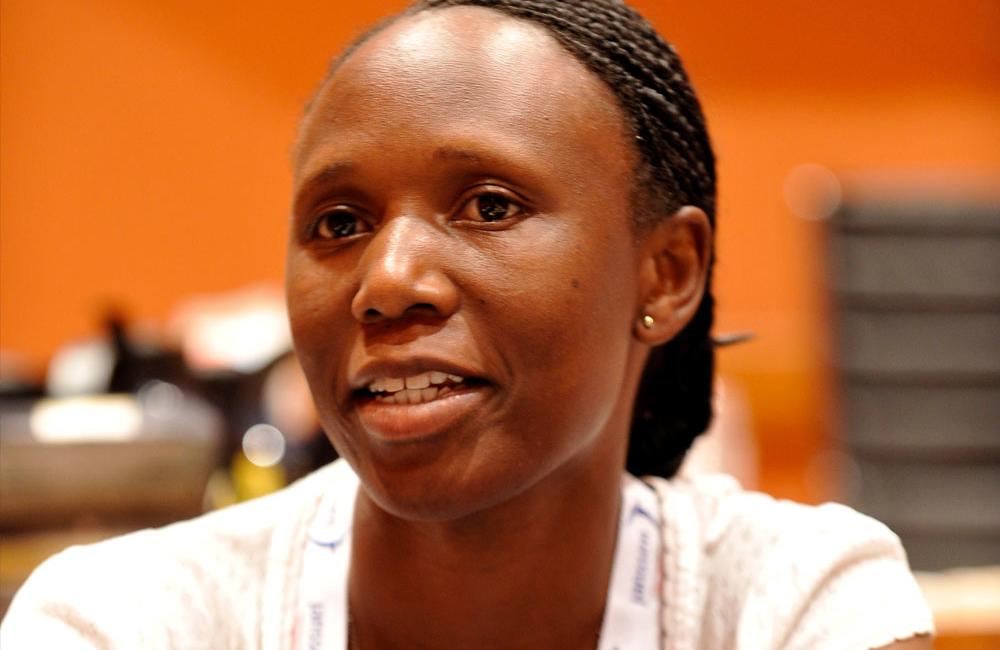 Josephine Birungi who presented the findings. ©IAS/Moreno Maggi
This article is more than 9 years old. Click here for more recent articles on this topic

In an uncomfortable finding for advocates of treatment as prevention, a study of heterosexual couples of differing HIV status in Uganda has found no difference in the rate of HIV infections in the negative partner when the positive partner was taking antiretroviral therapy (ART) and was virally suppressed, when compared to couples where the positive partner was not on treatment. Findings were presented at the 19th International AIDS Conference (AIDS 2012).

The finding came from an 'in the field' study of HIV patients attending the TASO clinic in Jinja, Uganda, and their spouses or partners. While researchers cannot explain why its results are so different from randomised controlled trials such as HPTN 052, which found that putting the HIV-positive partner on ART reduced the HIV trasnmission rate by 96%, it does serve as a warning, as presenter Josephine Birungi said, that "It may be difficult to extrapolate the results of randomised controlled trials to real-life situations in low-income countries."

The survey was of 586 patients and their long-term partners, followed for a median of two years. During the study, 238 (41%) of the HIV-positive partners stayed off ART because they did not meet treatment criteria (which at the time of the study was a CD4 count under 250 cells/mm3 or an AIDS-defining illness), 99 (17%) started ART and 249 (44%) were already on ART at enrolment. Ninety-three per cent of those on ART had viral loads under 1000 copies/ml.

The only differences between the groups were average CD4 cell count (515 cells/mm3 in patients off ART, 248 in starters and 392 in those already on ART), percentage of males (51% in those not on ART, 60% in those on ART), and self-reported condom use at last sex. In the latter case, people already on ART actually reported more condom use (67%) than people starting ART (62%) or not on ART (51%). The average duration of relationship was ten years when the positive partner was not taking ART and twelve if they were on ART or had started it during the follow-up period.

During the study, there were 17 new HIV infections. There were eight in people not taking ART, equivalent to an annual HIV incidence of 2.3%, and nine in patients on ART, meaning an HIV incidence of 2.1%. This difference was not significant (relative risk 0.91). The transmitting partner had to have been taking ARVs for at least three months to be categorised as being 'on ART'. In transmissions from patients on ART, the average time they had been taking ARVs was six months.

The viral load of 14 of the transmitting partners was tested in the visit after the one where their partner tested HIV positive. In all of the seven positive (transmitting) partners off ART, viral load was over 1000 copies/ml when they were tested, but only in three out of seven transmitting partners on ART. Only three of the infected partners have so far had phylogenetic testing to see if their virus is the same as their partner's. In two cases it was, but in one it wasn't, meaning that the infection came from an extramarital partner.

The other significant factors for new HIV infections in the negative partner were:

Men in partnerships where infections occurred were also less likely to be circumcised, and the length of relationship was shorter in these couples (eight versus twelve years), but these differences were not significant.

Josephine Birungi said  that it was difficult to understand the results of the study. Viral load measurements were taken at least a month or two after infections occurred, and viral load in the transmitting partner may not reflect the viral load at the time of infection. Other co-factors like STIs could lead to more transmission of virus at very low blood plasma viral loads. Or there could be significant under-reporting of extramarital sex partners – more phylogenetic testing needed to be done to determine how many infections came from outside the primary relationship.

"Our results do not question ART working as a prevention tool," she commented, "only that the effect can be undermined by social, biological and cultural factors that can underlie transmission."

The survey had findings that were to some extent in conflict with a Ugandan study presented later in the week, which fund that expanding treatment  produced lower community viral loads.