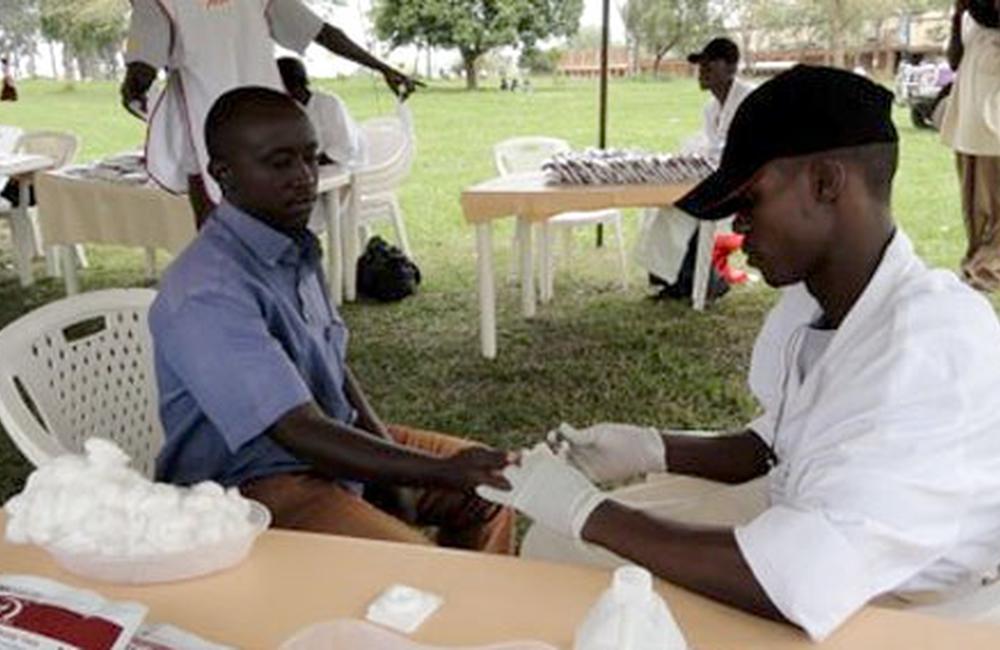 HIV testing in Uganda. Image by AIDS Healthcare Foundation.
This article is more than 9 years old. Click here for more recent articles on this topic

Positive changes in population-level HIV viral load distribution have been found one year after the implementation of key components of an HIV 'test-and-treat' strategy in rural Uganda. Population levels of viral load were lower, a higher proportion of people had an undetectable viral load (less than 50 copies/ml) and fewer individuals had a viral load greater than 100,000 copies/ml, according to a study presented by Dr Vivek Jain at the 19th International AIDS Conference (AIDS 2012) in Washington DC.

The findings are in contrast to a report of a field study among people receiving HIV care through the AIDS Support Organisation (TASO) in Uganda, which found no decreased risk of HIV acquisition among the HIV-negative partners of people receiving antireretroviral treatment through the programme.

Two community-wide health campaigns to diagnose HIV and link people to care were conducted in the Kakyerere Parish in May 2011 and May 2012 as part of a test-and-treat campaign. The health campaigns included awareness-raising of the importance of testing and a five-day HIV testing campaign, where fingerprick-based viral load testing was conducted using the Abbott HIV-1 RT-PCR test.

The community-based approach of this study creates a direct population measurement of viral load. When viral load is taken only from data at health facilities, it misses those people who are unaware of their status. However, the researchers warned that although there was a very representative sample and high coverage in the community, there is the possibility that different individuals took part in the testing campaign each year, which could skew results. The identification and assessment of viral loads in individuals who did not participate in the campaign is needed.

Nonetheless, this study moves towards true population estimates of community viral load in resource-limited settings where viral load testing is not part of routine clinical care, and shows the extent to which expansion of treatment can quickly reduce the proportion of infectious individuals in the population, as well as benefiting the people who are able to start treatment.

While the U=U message has been getting a lot of momentum in recent years, the role of HIV treatment in preventing HIV through other transmission routes is not as widely known. This information is important for informed healthcare decision making and further destigmatizing HIV.
CATIE Blog
29 Apr 21
More editors' picks