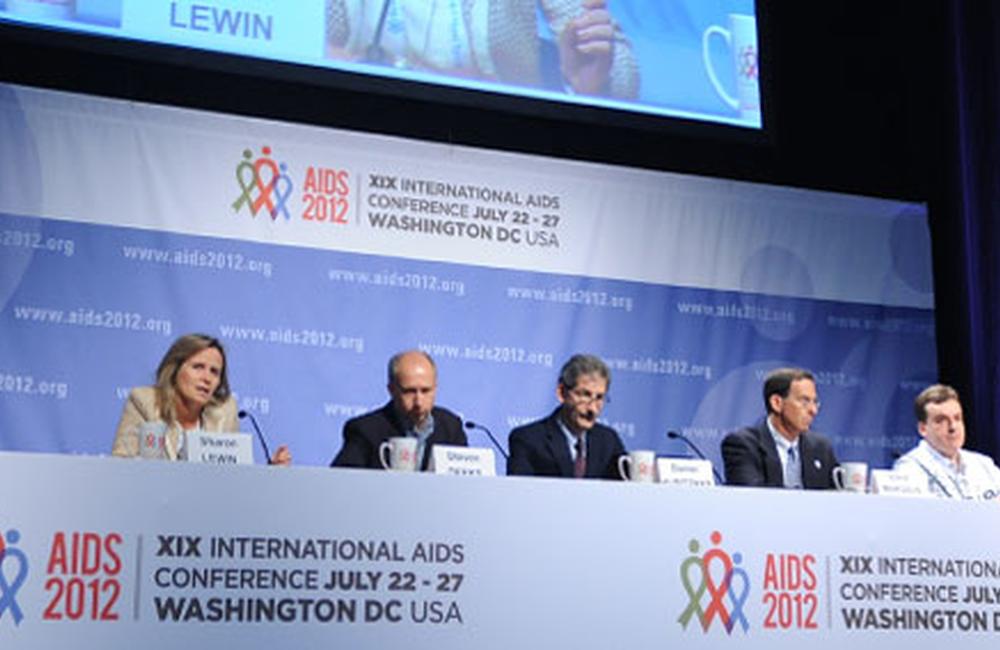 The panel at the HIV cure press conference. © IAS/Deborah W. Campos - Commercialimage.net
This article is more than 11 years old. Click here for more recent articles on this topic

Investigators presented some of the latest HIV cure-related research at a press conference and oral session on viral reservoirs at the 19th International AIDS Conference (AIDS 2012) this week in Washington, DC.

Experts also met for a two-day cure workshop prior to the conference, sponsored by the International AIDS Society (IAS), where they launched a global scientific strategy Towards an HIV Cure.

"The field is moving fast," said Sharon Lewin from Monash University in Melbourne, who will be local co-chair for the next International AIDS Conference in 2014. "We certainly don’t have a cure currently, but we have a better understanding of what we need to do".

"Today might be considered the day when the cure research agenda moves from the basic science lab into the clinic," added Steven Deeks, co-chair with Francois Barré-Sinoussi of the IAS HIV Cure working group.

One of the aspects that makes HIV difficult to cure is its integration into resting T-cells. The virus can maintain long-term latency in these, and potentially other reservoirs, but if the cells are activated, viral production can resume.

Several cure approaches under study involve activating resting cells and flushing the virus out of hiding, making it vulnerable to antiretroviral drugs and the natural immune response.

In a study described in the July 26 2012 issue of Nature, Nancie Archin and David Margolis from the University of North Carolina at Chapel Hill and colleagues evaluated whether the histone deacetylase inhibitor vorinostat (Zolinza, also known as suberoylanilide hydroxamic acid or SAHA) can disrupt HIV latency in people on antiretroviral therapy (ART).

The researchers collected resting CD4 cells from eight people with fully suppressed viral load while on HIV treatment. After a single dose of vorinostat, participants had increased HIV RNA expression in resting CD4 cells and higher levels of associated biomarkers.

"This demonstrates that a molecular mechanism known to enforce HIV latency can be therapeutically targeted in humans, provides proof-of-concept for histone deacetylase inhibitors as a therapeutic class, and defines a precise approach to test novel strategies to attack and eradicate latent HIV infection directly," the researchers wrote.

At the press conference, Margolis said the next step is to figure out how to apply this procedure to all latent CD4 cells in the body while protecting new cells from infection.

The widely reported case of 'Berlin Patient' Timothy Brown provided proof-of-concept that a functional HIV cure is possible. Brown received two bone marrow transplants along with intensive chemotherapy and radiation to treat leukaemia. He was given cells from a donor with an uncommon mutation known as CCR5-delta-32, which makes them resistant to HIV infection because they lack an important cell-surface co-receptor.

The donor cells replaced Brown's own cells, and after five years he remains off antiretroviral treatment with no evidence of replication-competent HIV in his blood, immune cells or gut tissue.

Kuritzkes said that over time the transplanted donor cells replaced the recipients' own lymphocytes, and their HIV viral load became undetectable using the most sensitive tests.

One patient has now been followed for two years and the other for three-and-a-half years, and both have "no traces of virus" in their plasma or purified T-cells; the researchers next plan to look for virus in various body tissues. The two men also experienced decreases in HIV-specific antibodies.

Although the donor cells were not missing CCR5 co-receptors, Kuritzkes explained that replacing the old cells apparently got rid of a reservoir of latent HIV, and continued ART protected new cells from infection.

"It's a form of PrEP [pre-exposure prophylaxis] on the cellular level," he said.

In the third study, Charline Bacchus, Asier Saez-Ciron and colleagues in France looked at outcomes among a group of people – dubbed the VISCONTI cohort – who started standard antiretroviral treatment very early, on average within 40 days after HIV infection.

An analysis of 14 patients in this group showed that after being on ART for a median of three years, they have been able to control HIV for several years after stopping treatment.

Compared with spontaneous controllers, VISCONTI cohort participants had higher viral load before starting therapy. Like so-called 'elite controllers' who suppress HIV without treatment, they have small and decreasing viral reservoirs even without ART.

But VISCONTI patients had HLA genetic patterns different from those of elite controllers, Saez-Ciron explained. In addition, their viral reservoirs were largely made up of short-lived T-cells, while long-lived cells that could harbour virus for a many years contributed very little.

Saez-Ciron concluded that a small proportion of people with HIV – estimated at 5 to 15% – may be able to control the virus over the long term off therapy if they start treatment very early.

Next steps toward a cure

Importantly, participants in the vorinostat and stem-cell studies remained on antiretroviral therapy, and only treatment interruption will show whether they are able to achieve a functional cure.

But unlike the Berlin Patient, who required intensive and risky procedures to save his life, most HIV-positive people who are suitable candidates for experimental cure approaches are on ART and are often in overall good health. Taking such people off HIV treatment to see what will happen raises new ethical concerns.

IAS president-elect Francoise Barré-Sinoussi said that the Towards an HIV Cure initiative has established an ethics working group to address these issues.

Asked when a cure might be expected, Deeks offered a sobering but realistic perspective: "The barriers to a cure are far greater than barriers to antiretroviral therapy [in the late 1980s]," he said. "I think we will discover a bunch of hits, none will be curative alone, and eventually they'll move into combination therapy. Unless we get very lucky this is going to take well over a decade."