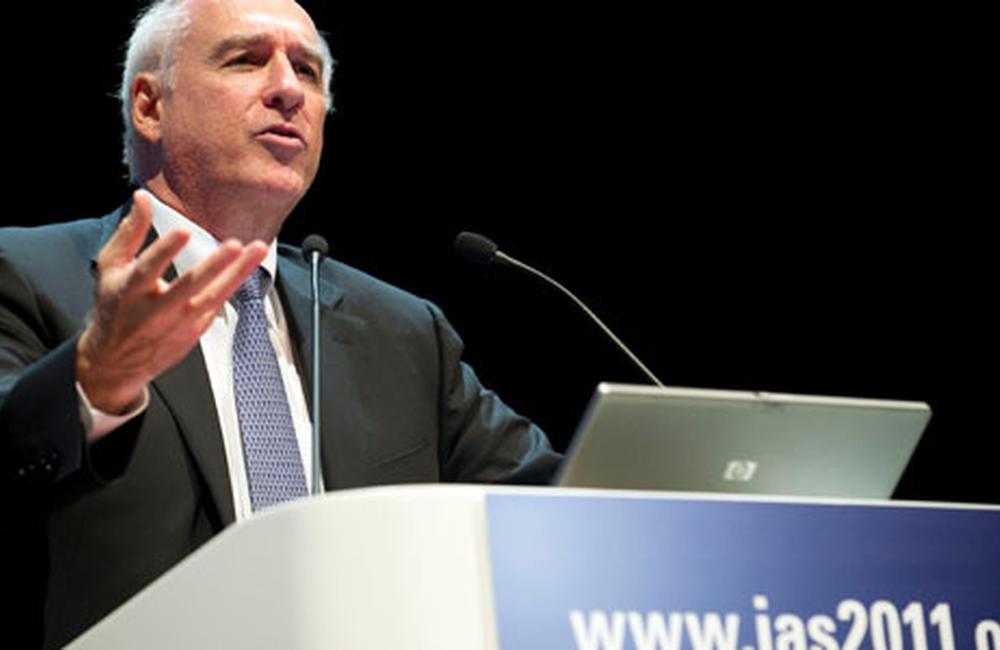 Results from a trial showing that antiretroviral treatment prevents HIV from being passed onto uninfected partners received a standing ovation today at the Sixth International AIDS Society Conference on HIV Pathogenesis, Treatment and Prevention (IAS 2011) in Rome.

HPTN 052 showed that early treatment – started at a CD4 count between 350 and 550 cells/mm3 – reduced the risk of HIV transmission to an uninfected partner – by at least 96%. Almost all the study participants were heterosexual couples.

"These are important results to give to a serodiscordant couple.” Myron Cohen

The study lends some support to advice given three years ago in the Swiss statement, a document issued by Swiss doctors which stated that, for heterosexual couples where the HIV-positive partner had an undetectable viral load on stable treatment (and no sexually transmitted infections) the risk of HIV transmission through vaginal intercourse was negligible.

But Professor Myron Cohen of the University of North Carolina, who led the study, urged caution in interpreting the results, reminding the audience that the transmission study had followed patients for a median of 1.7 years.

Nevertheless, he said, “these are important results to give to a serodiscordant couple.”

The HPTN 052 study recruited 1763 couples in Malawi, Zimbabwe, Botswana, Kenya, South Africa, Brazil, Thailand, the US and India.  The trial recruited serodiscordant couples – one HIV-positive, one HIV-negative – in which the HIV-positive partner had a CD4 cell count between 350 and 550 cells/mm3, and was thus ineligible for treatment.

The HIV-positive participants were randomised either to start treatment immediately, or to defer treatment until their CD4 counts fell into the range 250 to 200, the threshold for starting treatment in national guidelines at the time the study began recruiting.

The overall gender balance in the trial was even, but the HIV-positive participants were significantly more likely to be women in the Africa region.

Approximately 95% of the couples were married, and 6% reported unprotected intercourse in the previous month at baseline.

Of note, just over one-quarter of HIV-positive individuals reported no sexual activity at baseline, and there is some indication that sexual activity actually declined at some points during the follow-up period in both the immediate- and the deferred-treatment arms.

However, condom use was high, reported by 94% of HIV-positive individuals at baseline, and there was no evidence of a decline in self-reported condom use as the study went on.

A total of 39 individuals became infected during the study, four in the immediate-treatment arm and 35 in the deferred-treatment arm, during a median follow-up period of 1.7 years.

A careful genetic analysis of virus samples from the HIV-positive partner and the subsequently infected partner was conducted to determine how many of the infections could be attributed to the index partners.

Eleven cases of transmission were unlinked, that is, attributable either to sex outside the primary relationship, or else the source could not be confidently determined. There was a strong association between unlinked infection and reporting more than one sexual partner in the three months prior to seroconversion (p<0.0001).

This left 28 infections, of which only one occurred in the immediate-treatment arm. This represented a reduction in the risk of transmission of 96%, and was highly statistically significant (p <0.001).

Surprisingly, the majority of transmission events were estimated to have occurred when the index partner had a CD4 count above 350 cells/mm3, indicating that any potential prevention benefit of treatment might only be maximised by providing treatment above the threshold currently recommended by the World Health Organization. (It recommends that treatment should start once a person’s CD4 cell count has fallen below 350.)

In the delayed arm, the median viral load (as measured at the last clinic visit) at which transmission took place was 4.9 log (approximately 80,000 copies/ml), while the median CD4 count was 391 cells/mm3.

In the immediate treatment arm the only verified transmission took place during the early months of treatment, with HIV antibodies fully detectable 85 days after baseline in the partner who became infected. The transmitting partner had a baseline viral load of 87,202 copies, and after 28 days a viral load below 400 copies/ml.

Professor Cohen said that couples need to be counselled about the possible differences in risk between the first few months of treatment and later periods.

The results of the study were announced in late May after the study’s independent data and safety monitoring board decided that the magnitude of benefit made it unethical to continue with a randomised study.

"You shouldn’t underestimate the power of having a scientifically based argument, rather than waving your arms about.” Anthony Fauci

The results have fundamentally changed attitudes towards treatment scale-up and the possibility of halting the epidemic, but the hard work of winning funding and implementing wider treatment is not over.

Dr Elly Katabira, President of the International AIDS Society, warned that scientists and activists still have a lot to do to convince policy makers and donors of the importance of the findings and the need for rapid action to translate the findings into treatment expansion in the countries worst hit by HIV.

But Dr Tony Fauci of the US National Institutes of Health told reporters: “You shouldn’t underestimate the power of having a scientifically based argument, rather than waving your arms about.”

A full journal publication on the HPTN 052 study was released today by the New England Journal of Medicine.