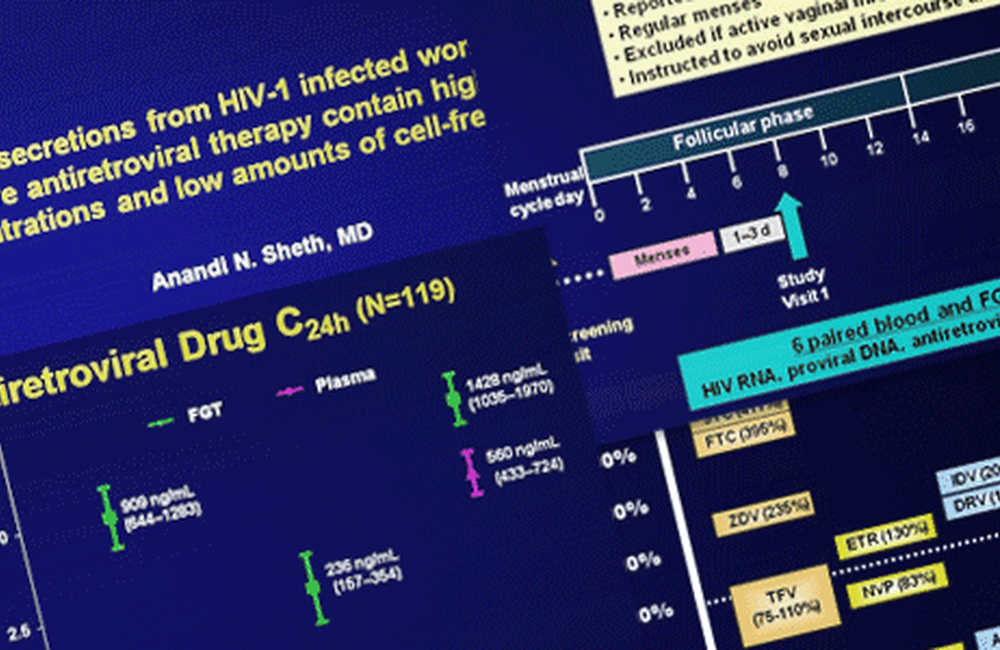 Images from presentation by Anandi Sheth of Emory University School of Medicine, Division of Infectious Diseases, Atlanta, United States.
This article is more than 10 years old. Click here for more recent articles on this topic

A study of paired samples collected from the blood and cervico-vaginal fluid (CVF) of 20 women on stable antiretroviral therapy has found little evidence that there are infectious quantities of cell-free virus in CVF in women on stable therapy.

The study, conducted by Anandi Sheth from the Emory Center for AIDS Research in Atlanta, USA, and presented at the International AIDS Society conference (IAS 2011) in Rome, also found that levels of the drugs studied reached higher levels in the CVF than in the blood – even in one drug, atazanavir (Reyataz), where concentrations had been expected to be lower. This adds to evidence that fears expressed after the FEM-PrEP study that drugs taken orally might not reach high enough concentrations in the vagina to work as pre-exposure prophylaxis in women may be groundless.

The other interesting aspect of this small study was that samples were taken in the women six times over a four-week period, thus sampling HIV viral load and drug levels at all points of the menstrual cycle.

All of the women were on a specific antiretroviral regimen of Truvada (tenofovir/FTC) plus boosted atazanavir (ATV/r). All but one of the women was African-American, and all but one had become HIV-infected through sexual contact. Seventeen of the women were sexually active, 16 with only one sexual partner, and twelve (60%) were in a serodiscordant sexual relationship. They had been, on average, HIV positive for nine years, on their current antiretroviral regimen for 14 months, and had an average current CD4 of 412 cells/mm3.

Counting from the first day of each woman’s period, the first paired blood and cervico-vaginal fluid sample was taken about eight days later or about four days after the end of her period. Samples were then taken every two to four days to a total of six samples over the next four weeks, with the last sample two to three days before the woman started her next period. Between them, the 20 women provided 102 paired blood/genital fluid samples.

Viral load was tested with the Roche Amplicor viral load assay, whose ‘limit of quantification’ (LOQ) is 50 copies/ml in blood and 500 copies/ml in cervico-vaginal fluid. Viral loads below this would conventionally be called ‘undetectable’ but in fact assays like this can detect the presence of lower levels of virus than this, they just cannot quantify the number of copies reliably. Both blood and cervico-vaginal fluid were tested for the levels of both viral RNA, indicating free viral particles, and viral DNA, indicating cell-associated virus.

In blood, cell-associated virus was detected in all samples, simply indicating that proviral HIV was still present in some of the women’s cells despite antiretroviral treatment. Free viral RNA was detected at 58% of visits in 80% of patients. However RNA above the LOQ was only found in 11% of the 102 samples and never found in 60% of patients.

The likelihood of viral RNA being detected (at any count) varied through the month. RNA was detected in 70% of samples provided at the first and second visit, i.e. during the follicular phase when the woman is reaching her peak fertility. It fell to about 50% during later visits, during the luteal phase when fertility is slowly declining.

HIV was less likely to be detected in cervico-vaginal fluid. Cell-associated HIV DNA was detected in 36% of samples, and was never detectable in 30% of patients. Cell-free RNA was detected in 16% of samples and never detected in 55% of patients but no samples of RNA were found where the viral load was above the LOQ of 500 copies/ml. Again, viral levels were higher in the early phase of the menstrual cycle, with RNA found in 25% of the first two samples taken but 10% at later times in the month. However this association with the position in the menstrual cycle was not statistically significant. The only significant predictors of detectable RNA or DNA in cervico-vaginal fluid was the presence of white cells (leukocytes) or blood in the fluid.

The surprise was atazanavir; the consensus of previous studies having been that atazanavir levels are only one-sixth as high in CVF as in blood, whereas in this study they were 2.5 times higher.

Drug levels did not vary by position in the menstrual cycle, or by whether there was detectable virus in the sample.

This was a study of fundamentally healthy women on a stable ARV regimen with apparently 100% adherence. In this population, although viral detectability did vary slightly during the menstrual cycle, 89% of the women were conventionally ‘undetectable’ for HIV in blood and 100% in cervico-vaginal fluid, and all had high drug levels.

While this does not rule out that women in this position may be infectious, especially if infection via cell-associated virus is common, it provides supporting evidence that HIV treatment may reduce women’s infectiousness.

"Serodiscordant (or sero-different) relationships are very rarely shown in popular culture, so there’s not really much to compare our own experiences with." Sydney-based HIV and bi+ community advocate, Steve Spencer, explores what modern HIV relationships in the era of U=U.
NAPWHA
28 Jan 21
More editors' picks