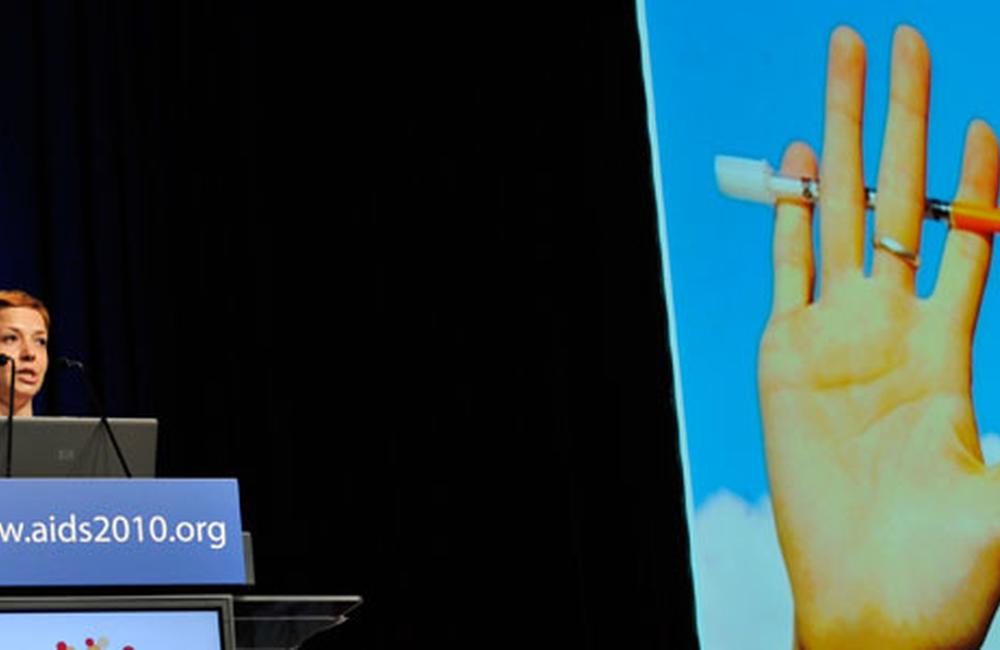 Anya Sarang, President of the Andrey Rylkov Foundation for Health and Social Justice in Moscow, Russia. ©IAS/Marcus Rose/Workers' Photos
This article is more than 12 years old. Click here for more recent articles on this topic

A panel at the Eighteenth International AIDS Conference in Vienna this week recognised the dire level of health need among prisoners and the slow progress currently being made towards prison health reform. Most countries have implemented few  or no harm-reduction programmes for those behind bars, providing next to no protection for those involved in risky behaviours such as needle-sharing and unprotected sex.

Speaking of his own experience, Albert Zaripov of Russia said that he regularly saw syringes used by 20 or 30 people, with substances being easily procured. “There was no aid at all, no social aid, no medical aid, nothing at all,” he said. “This is quite common in places of … detention.”

Beyond facilitating transmission of illnesses, poor treatment of infected prisoners sometimes amounts to human rights abuse. Zaripov recounts that HIV-positive prisoners were isolated and that “people were afraid to supply them with food and water”. Zaripov describes their living situation as essentially large 'doghouses', where they were intermittently brought supplies. “It was terrible, it was just like feeding animals,” he said.

Rick Lines, Executive Director of the International Harm Reduction Association, reiterated these concerns. “Issues around … poor prison conditions … affect people living with HIV that much more severely,” he said. While Zaripov notes that conditions have improved since his release, “In reality, not many people are receiving ART nowadays. Many people will die without having seen any therapy.”

Of notable exception to the norm is the Spanish Prison Administration, which has implemented harm reduction and large HIV and HCV testing and treatment programmes. Of central importance to the Administration’s work is the early detection of cases in order to allocate appropriate treatment, coupled with prevention of new cases. As a result of a needle exchange programme, 200 HIV infections have been avoided annually since 2002.

But panelists warn that Spain is an exception, with most governments being reticent – at best – to improve health indicators. “There are vast numbers of countries who haven’t done anything at all, and for whatever reason don’t see the urgency,” said Lines. While Spain is the best model of practice, the country “is very, very much in the minority”.

Key to this reluctance is the stigma associated with risky behaviours, such as sex between men and illicit drug use. According to Kristian Crole of the UN Office on Drugs and Crime's HIV/AIDS unit, politicians practice “denial to admit that you have … sex between men [and drugs] in prisons….How can I tell the public if I’m a politician that I let drugs get in? How can I admit to the public that I’m not doing a good job?”.

Anya Sarang of Russia’s Andrey Rylkov Foundation for Health and Social Justice continued. “The main barrier is political will,” she said. “Until the political resistance [subsides], it will not be possible to do anything.”

Mercedes Galizo Llamas, the Secretary General of the Spanish Prison Administration, noted that evidence-based policy was able to abate fears from the general public about harm reduction and other programmes, nothing that “[Spanish] politicians demonstrate a trust in the public health sector within the prison system.”

Beyond simply introducing better health care within prisons, advocates claim that widespread penal reform is essential to truly combat burgeoning epidemics. “The prison is only one aspect of the criminal justice system,” said Lines, affirming Sarang’s position that better education was needed for judges and lawyers. Crole noted that many people currently in prison “have never seen a judge. In some African countries, they are sitting there for six, seven, eight years without trial.”

Panel members contend that decriminalisation of drug use is also necessary. “The root of this public health and human rights crisis … is over criminalisation of issues dealing with drugs,” said Sarang. In Russia, “almost every drug case ends with imprisonment.”

Lines observes that most prison health reform that has occurred resulted from outside advocacy. Prisons have long been seen as “vectors of diseases”, with prisoners transmitting HIV and other infections acquired while in detention to the community at large after their release. “Much progress on prison reforms … has been using public health and fear of infection and fear of epidemics. People are more likely to care about the health of prisoners when they get out of prison,” he said. “Public health continues to offer one of the mechanisms to push for prison reforms, and health-related policies in general.”

Crole suggests that greater visibility of prisoners and ex-prisoners could be central to pushing for reform. He also suggests that prison staff could become key advocates, given that they are at risk of being infected as well as being witness to the neglect of prisoners’ health and human rights abuses.

A solicitor at Duncan Lewis law firm has submitted a pre-action letter to the government stating an intention to take them to court over a failure to “operate a safe and lawful system for individuals with HIV in detention” and the subjection of their client to an “unacceptably high risk of contracting Covid-19” prior to or whilst on the scheduled charter flight.
The Independent
9 Nov 21
Migrants, refugees & displaced people

The 42-year-old man relies on daily medication to manage his HIV, and says the dosages for his other ailments, schizophrenia and depression, have been reduced by staff at Colnbrook Immigration Centre.
The Independent
8 Nov 21
Migrants, refugees & displaced people

US: Venezuelan man with AIDS dies in ICE custody

Officials have confirmed that inmates will be given access to a range of items after a bisexual prisoner, who has been granted anonymity, threatened to take legal action earlier this year.
The Irish News
14 Oct 21
Prisoners

HIV prevalence among CJ-involved adults is three times higher than in the general population. In the context of the COVID-19 pandemic, jails and prisons are at high risk and make up many single-site cluster outbreaks.
Health Affairs
25 Aug 21
More editors' picks