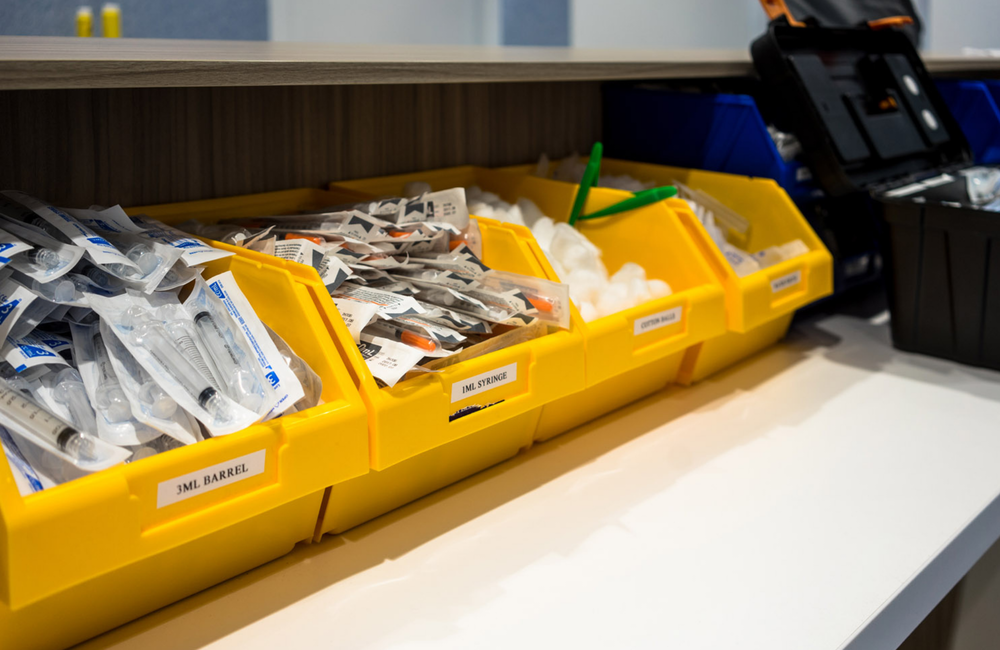 Results published in the Morbidity and Mortality Weekly Report show alarming racial disparities in HIV prevalence and access to services among people who use drugs in US cities. Between 2015 and 2018, the overall prevalence of HIV infection among people who inject drugs held steady at 7%. However, Black people had higher rates of HIV than their Hispanic or White counterparts, despite reporting fewer HIV risk behaviours.

Similarly, overall use of syringe service programmes held relatively steady between 2015 and 2018. Underlying that were concerning racial disparities, with access improving for White and Hispanic people but substantially declining for Black people. The latter group were also less likely to be prescribed medication to treat opioid use disorder.

Syringe service programmes (SSPs) are a safe and cost-effective way to prevent HIV among PWID that have not been shown to increase drug use or crime. SSPs can help prevent transmission of viral hepatitis and other bacterial or fungal blood-borne infections, facilitate safe disposal of used syringes, prevent overdose deaths, and serve as a conduit for linkage to substance use disorder treatment, antiretroviral therapy, pre-exposure prophylaxis, and other services for PWID.

A separate literature review looked at the role of SSPs and concluded that the US will not end the HIV epidemic without scaling up SSPs. They recommend maximising the impact of SSPs by following best practices, including a comprehensive approach where PWID can access medications to treat opioid use disorder, PrEP, and antiretroviral therapy within SSPs.

The 2018 National HIV Behavioral Surveillance survey conducted by the Centers for Disease Control and Prevention (CDC) collected cross-sectional data and conducted HIV testing with PWID in 23 US metropolitan statistical areas.

Eligible participants were people who had injected non-prescribed drugs in the previous 12 months, who resided in one of the metropolitan statistical areas, who were 18 or older and could complete the interview in English or Spanish.

Among male respondents, 10% reported a male partner within the previous twelve months. Researchers were able to estimate the overall prevalence of HIV for this group. However, the number was too small to produce reliable estimates of specific sexual practices between men.

Most participants (80%) had been injecting drugs for five or more years and over half (55%) reported most frequently injecting only heroin. Most respondents (82%) had current health insurance. Almost three-quarters (72%) had a high school diploma or greater, but most (75%) lived at or below the federal poverty guidelines.

Considering US census regions, 36% were from the Northeast, 29% from the South, 8% from the Midwest, and 26% from the West. There were also just under 500 participants in San Juan, Puerto Rico, which is not included in any of the Census regions. No rural areas were included.

Overall, 7% of participants tested positive for HIV, including 10% prevalence in the Northeast, 9% in the South, 1% in the Midwest, and 4% in the West. Overall prevalence was unchanged from the previous National HIV Surveillance study conducted in 2015.

Weighted HIV prevalence was highest among gay and bisexual men who also reported injection drugs use (25%) and PWID aged 40-49 (12%). Black participants had a higher HIV prevalence (12%) than White (5%) and Hispanic (5%) participants.

Overall, 26% reported using syringes previously used by another person. This was highest among White people (36%) compared to Hispanic (22%) or Black (16%) interviewees. Across sites, nearly half (49%) reported using injection equipment (e.g., cottons, cookers, water) that had previously been used.

Racial disparities were also present in testing, prevention and treatment. Fifty-seven per cent of HIV-negative interviewees had received an HIV test in the previous twelve months, with fewer White PWID receiving a test (53%) than Hispanic PWID (62%).

Over half (56%) reported using medication to treat opioid use disorder (MOUD) in the preceding twelve months, with Black people being the least likely to be using MOUD at 47%, compared to 58% of White people and 65% of Hispanic people.

Overall, 55% of PWID received syringes from an SSP in the previous twelve months, comparable to the 52% reported in the 2015 national study. However, the overall figures mask a troubling reality: SSP use diverged along racial lines in those three years.

In 2015, SSP use was fairly even among Black, White, and Hispanic people at 51%, 53%, and 54%, respectively. By 2018, SSP use had increased to 63% for both White and Hispanic people, while the proportion of Black PWID receiving syringes from an SSP dropped sharply to 40% .

This study offers a pre-COVID-19 snapshot of PWID in urban areas of the US. The pandemic has disrupted access to SSPs and related services, but it is too soon to fully understand the implications of these disruptions on the health of PWID.

Further, the study only included PWID who live in metropolitan areas. Multiple HIV outbreaks have been reported among PWID living in rural and non-urban areas, and these settings present different challenges. These include fewer or non-existent SSPs, fragmented services, having to travel far to access services, challenges with broadband access that can limit virtual services, and different social and political climates.

Nonetheless, the overall stagnant outcomes and worsening racial disparities suggest that existing SSPs are failing to make meaningful progress for PWID. A recent literature review concluded that the US will not end the HIV epidemic without scaling up SSPs and adopting best practices.

Dr Dita Broz and colleagues from the CDC conducted a literature review about the role of SSPs in the US Ending the HIV Epidemic (EHE) initiative. The review covered the evidence base for the role of SSPs in the four pillars of the EHE initiative: prevent, diagnose, treat, and respond (to HIV outbreaks). The evidence, which has been accumulating for decades, showed that SSPs can make meaningful and significant progress towards these goals.

However, these benefits are largely dependent on whether the SSPs follow best practices for service delivery. One key element of best practice is needs-based syringe distribution, e.g., not limiting the number of syringes provided. A survey of clients from 24 SSPs found that 61% reported using a sterile syringe for each injection under needs-based distribution, compared to 26% under a one-for-one syringe exchange.

Any policy that limits syringes can also limit one of the most effective tools of an SSP: secondary syringe distribution by peers. Peers, including current clients, have been shown to reach more diverse networks of PWID and reach individuals who are facing barriers to accessing services. SSPs should train and support peer educators and actively promote secondary syringe distribution.

SSPs should be responsive to the needs of the local PWID population. People who use drugs should be engaged in programme design and implementation, which may require adapting the planning process to accommodate such participation. Service delivery should also be adapted to local needs. Another way to maximise responsiveness it to ensure that staff or volunteers share lived experience with clients. Given the low rates of SSP utilisation by Black PWID, recruitment from Black communities may be particularly important.

"Offering PrEP at syringe services can allow PWID to access PrEP in a setting where they are comfortable."

Access to SSPs should be ‘low-threshold’: SSPs should allow clients to be anonymous, avoid extensive intake processes, only collect the minimum data necessary for programme evaluation, and increase locations and available hours. Further, syringe vending machines, allowing sales of syringes at pharmacies, and home and mail delivery are all strategies that can complement SSPs.

SSPs often reach PWID who may not otherwise engage in the healthcare system. As such they offer an important opportunity meet people where they are at. All the available evidence show that SSPs have the greatest impact with a comprehensive, integrated approach that addresses other needs of PWID.

At a minimum, SSPs should also offer HIV and hepatitis C testing and linkage to care, naloxone distribution, and provision of or linkage to substance use disorder treatment, including medication to treat opioid use disorder (MOUD).

Studies have shown an additive effect of co-located services. The risk for HIV transmission can drop by nearly 50% when PWID can access both SSPs and MOUD. When both MOUD and ART are available at SSPs, there is a positive impact on ART adherence.

This integrated approach may have implications for PrEP use as well. More research on integrating PrEP in SSPs is needed, but studies have shown that both PWID and providers report a preference for PrEP access at SSPs. Offering PrEP at SSPs can reduce the number clinic visits and allow PWID to access PrEP in a setting where they are comfortable and less likely to encounter stigma.

Telehealth is one way to offer MOUD, PrEP, and ART for PWID. Other strategies that can increase integration include having healthcare providers see patients in SSPs, directly administered ART, standing PrEP orders, and on-site medication lockers. Such comprehensive services maximise the impact of SSPs on the health and wellbeing of PWID.

In the context of a worsening opioid crisis and nationwide HIV outbreaks among people who inject drugs, it is clear that efforts end HIV in the United States will not be achieved without scaling up SSPs and following best practices.

The need is great. The most recent snapshot of PWID in urban areas of the US showed that just over half of PWID had accessed an SSP in the preceding twelve months; an incomplete picture that doesn’t account for PWID living in rural or remote locations.

Black PWID experienced a drastic decline in use of SSPs over three-year period, had a higher prevalence of HIV despite engaging in fewer HIV risk behaviours, and had inequitable access to MOUD. The US Ending the Epidemic initiative offers an opportunity to end HIV among PWID through expansion of SSPs and related services. Efforts to do so must directly address racial disparities in HIV prevalence and service use among PWID.

Broz, D et al. Syringe service programs’ role in ending the HIV epidemic in the U.S.: why we cannot do it without them. American Journal of Preventive Medicine, 61: S118-S129, November 2021.

Odesa is a major Black Sea port in Ukraine where the first outbreak of drug use and HIV infection in the 1990s brought about the beginning of the HIV epidemic in Ukraine. Today Odesa has one of the most efficient systems of harm reduction services for people who use drugs.
UNAIDS
25 Apr 22
People who inject drugs

A Boston-based HIV outbreak among people who inject drugs may have accelerated during the past year, with a total of 171 cases, an increase of 58 identified cases since March 2021.
Boston Globe
21 Mar 22
More editors' picks