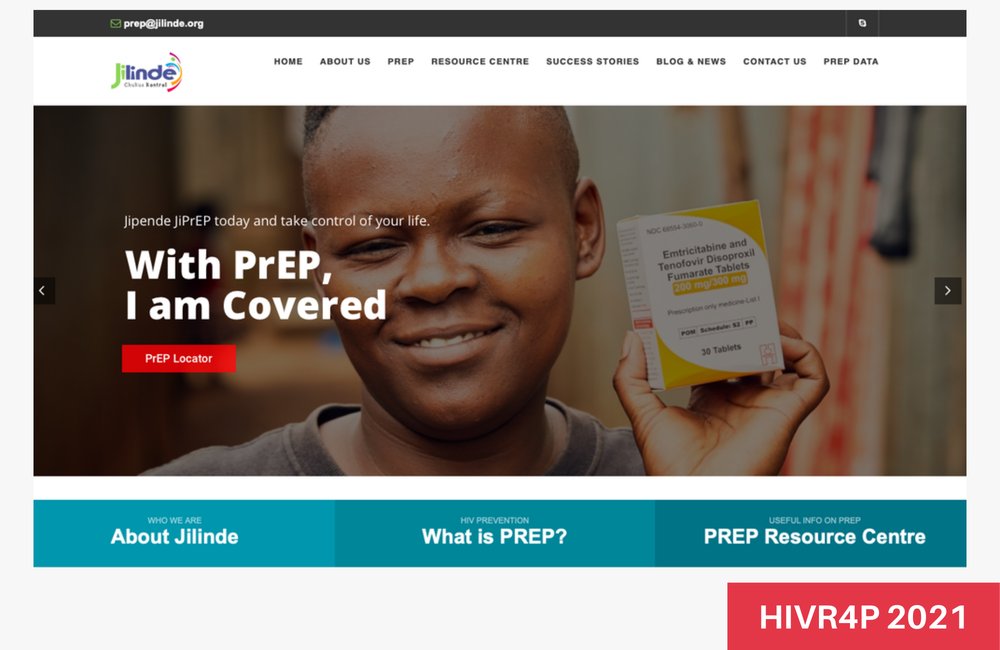 Home page of the Jilinde PrEP programme in Kenya

This year's HIV Research for Prevention (HIVR4P) virtual conference featured a large number of sessions examining PrEP usage and discontinuation rates among a variety of users, especially in Africa.

Many of the presentations looked at factors that worked as incentives to keep taking PrEP. There is interest in this because, despite higher initiation rates in a larger number of countries than ever before, the retention rates (also called persistence rates) of people in PrEP programmes in the region remain very low.

Kate Segal from AVAC gave a summary of where the world is at in terms of PrEP initiations, as reported by Krishen Samuel here. In sub-Saharan Africa, over half a million people have started PrEP since 2016 and initiations overtook those in North America during the second half of 2018.

However, the most striking slide she displayed was one from Jilinde – one of the largest providers of PrEP in Kenya. This showed very low continuation rates for people initiated on to PrEP. Only 16-23% of people (depending on population group) returned for their first appointment, and after three months this figure was down to 5% (in the negative partners of HIV-positive people) and only 1% (in adolescent girls and young women). Return rates are not quite so low in all the projects Segal cited: for instance, in South Africa and Tanzania, the EMPOWER open-label study of PrEP for adolescent girls and young women saw continuation rates at month one of 73%, at month three of 61%, and at month six of 34%. But this was a study that provided a much higher level of support than the Jilinde programme.

Another study presented at HIVR4P by Dr Jessica Haberer of Massachusetts General Hospital showed that retention in a study – the percentage of people who return to their pharmacies and get refills – is not the same as the proportion who actually take the pills.

In this study, which was primarily intended to see if SMS reminders improved adherence (they did not), pharmacy pill collection rates were 100% at month one, 80% at month three, 62% at month 12 and 50% at month 24. In contrast, the number of pills that could have been taken, which in this case was determined by a pillbox that gave out a signal when it was opened, was 60% at month one, 30% at month six, 21% at month 12, and 12% by month 24.

Starting and stopping PrEP in Kenya

A couple of presentations at HIVR4P interviewed PrEP users about their motivations for both starting and stopping.

Annabell Dollah, a social scientist at the Kenyan Medical Research Institute, conducted a qualitative study of 30 women and 16 men who started and stopped PrEP at 25 public health centres in central and western Kenya. Their average age was 32. Only seven (15%) had been on PrEP for more than six months.

When asked why they started PrEP, the reasons ranged from the rational to the romantic:

The stigma against HIV and the presumption that people taking PrEP have HIV loomed large in reasons why people stopped:

A few had experienced violence because of PrEP:

Others had more practical reasons for stopping PrEP:

Finally, others gave answers indicating they might have continued if they had had more support:

Dollah concluded that people will not adhere if they are just told to take PrEP: they need sex-positive counselling and information about HIV risk. PrEP may not be indicated for people who are successfully managing their risk with condoms.

Disclosure and event-driven use

If you can disclose PrEP use, the resulting support helps adherence, another study found. Dr Joseph Daniels of the Charles R Drew University in Los Angeles, in conjunction with the Desmond Tutu Foundation, found a strong correlation between disclosing PrEP use and staying on it. This study recruited 42 adolescent girls and young women who were taking PrEP, half from an urban area and half from a rural area in South Africa. It assessed their PrEP adherence directly by measuring their intracellular concentrations of tenofovir in dried blood spots and grouped participants with high or low adherence (above or below 700 fmols/punch).

The study was primarily interested in whether and how the women disclosed their PrEP use to family members (most were living with their parents and attending high school), friends and sexual partners. Daniels did not specify what proportion of women had high adherence, but 92% of women with high tenofovir levels had disclosed their PrEP use to all three categories of people, compared with 58% of women with low adherence.

Disclosure to different categories of people helped PrEP users’ determination to maintain adherence, Daniels explained, as discouraging messages from one person could be discounted by continued support from others. For example, one interviewee said her aunt had been supportive of her PrEP use – even sending her text reminders – but had stopped supporting her after discussing her niece's PrEP use with a friend, who told her PrEP was dangerous. The participant said, however, that by this time she had told her boyfriend, who was interested and supportive – though she also had to tell him her pills were only for herself and she could not share them with him.

One aspect of PrEP programmes in African programmes is that daily use is stressed, due to a lack of data on other schedules. However, this may clash both with people’s 'seasons of risk' and with a need for privacy. Dr Janan Dietrich of the University of Witwatersrand and colleagues asked 1339 young people (evenly split between males and females) aged 13-24 in four African cities (Cape Town and Johannesburg in South Africa, Harare in Zimbabwe and Entebbe in Uganda) whether they had ever heard of PrEP. Then, having explained daily use and event-driven use (independently of specific regimens) they asked which they would prefer.

About half of respondents reported using a condom at last sex (56% women, 48% men). A quarter of the young people had heard of PrEP, though only 12% in Uganda.

Overall, 60% of participants said they would prefer event-driven use, especially in Uganda and Zimbabwe. Only a third preferred event-driven use in Cape Town, possibly because more of the young people in South Africa had heard of PrEP and had heard about it being a daily regimen. Overall, there was a strong gender split: nearly two-thirds of boys/men preferred on-demand PrEP, whereas only a third of girls/women preferred it.

US: ‘This will shut us down’: HIV prevention clinics brace for Gilead reimbursement cuts