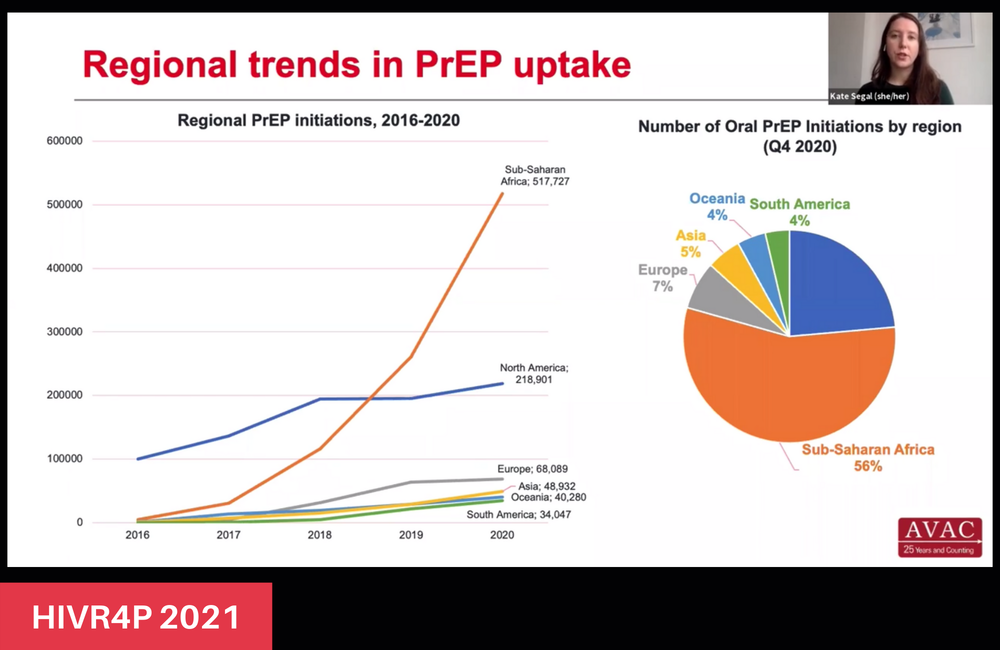 Despite the incredible efficacy of oral pre-exposure prophylaxis (PrEP) and 78 countries currently offering PrEP in some form, its effectiveness at reducing HIV incidence in the real world has been dependent on far-reaching factors that go beyond how well PrEP is able to prevent HIV acquisition at a cellular level: political leadership, quality health services and funding.

Kate Segal from AVAC presented global trends in oral PrEP use over time to the virtual HIV Research for Prevention conference last week. A total of 928,750 people have started PrEP so far, with the highest numbers in the United States, South Africa and Kenya.

While Kenya is considered a model of success, Dr Abednego Musau’s presentation showed that we need to look beyond the number of new PrEP users. Between 2017 and 2019, only two-thirds of those eligible for PrEP in Kenya actually started taking it and only a third of those who started returned for a PrEP refill at one month, indicating that there are crucial systemic factors that need to be addressed, even in those countries with high PrEP uptake.

The UNAIDS goal for 2020 was to have three million people taking oral PrEP globally in order to help reduce the number of annual new HIV infections to 500,000. Key populations, such as men who have with men (MSM), sex workers and people who inject drugs, were prioritised and it was hoped that 90% of these key populations, and 90% of adolescent girls and young women in key locations, would be taking PrEP by now.

These goals have not been achieved: by the end of 2020, 928,750 people had started taking PrEP worldwide: just under half of all sex workers and approximately a third of MSM, people who inject drugs and adolescent girls and young women in key locations. Funding for the global HIV response has not increased but has remained consistent over time.

AVAC’s Global PrEP Tracker, a comprehensive database of worldwide PrEP projects and national programmes, has been tracking data on the scale-up of PrEP since 2014, with Segal focusing on data from 2016 to 2020. The majority of new PrEP users have come from a handful of countries: only ten countries have had more than 25,000 initiations to date, most of which have occurred in the last four years. In 2020 alone, over 300,000 new people started taking PrEP – despite the coronavirus pandemic – the biggest jump in initiations since PrEP was approved.

Sub-Saharan Africa has had the highest number of PrEP initiations globally since 2016, representing 56%. In this region, South Africa (101,007), Kenya (82,886) and Zambia (72,309) are at the forefront. There has been a substantial increase from just around 4000 initiations in 2016 to over half a million in 2020, largely due to the US President’s Emergency Plan for AIDS Relief (PEPFAR) funding and strong national commitments to improving PrEP access and uptake. While the US has had the highest number of cumulative PrEP initiations, with over 200,000, they have had comparatively modest growth rates in PrEP uptake.

Oceania has had the highest percentage growth rate since 2016, driven by Australia. In Latin America and Asia, growth has been largely driven by Brazil and Thailand.

Segal described some crucial commonalities for those countries with high uptake. One was early PrEP adoption: nine of the eleven countries that had the most initiations in 2016 also had the most initiations in their regions in 2020. Strong national commitment to PrEP scale-up – adopting national PrEP policies and guidelines, setting ambitious PrEP targets, allocating sufficient resources and having a key PrEP country co-ordinator – is another crucial factor. Additionally, those countries that have put tailored PrEP programmes in place, offering it to populations at the highest risk of HIV acquisition, alongside provision for the general population, have been most successful.

Not only do these services need to be community-led, accessible and free from discrimination, but they also need to ensure that there are linkages to social support. As Segal commented: “Biomedical prevention does not exist in a bubble and there are many social and structural barriers that may impede access to, and uptake of, PrEP.” Barriers may be lowered by peer support services, income generation activities and other forms of support.

An important takeaway lesson is that offering PrEP alone does not guarantee that people start and continue with PrEP. There are various reasons for this; among them is that HIV risk changes over time and individuals may prefer different prevention methods at different times. Additionally, HIV-related stigma remains a significant barrier to PrEP uptake in various settings, with many users reporting trouble taking it discreetly, or being believed to be living with HIV instead of trying to prevent it.

Looking more closely at the country with the second highest number of PrEP initiations in sub-Saharan Africa provides a clearer picture of successes, as well as gaps in implementation and continuation of PrEP, at a country level.

The Jilinde Project, a five-year initiative to develop an effective model for increasing PrEP uptake in low resource settings, supports Kenya’s national PrEP programme and targets people at high risk of getting HIV from various groups, including individuals in the general population, MSM and female sex workers. Jilinde operates in both public and private health facilities in ten counties across Kenya. They are clustered in three regions, the largest of which is around Nairobi, with over 10,000 PrEP users.

Between 2017 and 2019, of the 334,068 people who tested HIV negative, 28% received behavioral risk screening in order to assess eligibility for PrEP and 18% of those screened were deemed eligible. Two-thirds of the eligible individuals started PrEP, resulting in just over 11,000 new users. They comprised negative partners of people living with HIV (serodiscordant relationships, 55%); individuals at high risk in the general population (25%); female sex workers (14%) and MSM (2%).

However, of all new PrEP users during this period, only a third returned for a PrEP refill after one month. While a greater percentage of those in serodiscordant relationships and key populations started PrEP than high-risk individuals in the general population, a greater percentage of individuals in serodiscordant relationships returned for a refill at one month than both the other groups.

"Not only do these services need to be community-led, accessible and free from discrimination, but they also need to ensure that there are linkages to social support."

One of the challenges that Dr Musau noted was that behavioural risk screening efforts tend to yield many ineligible individuals. Data analysis also showed that public facilities and high-risk individuals from the general population showed greater missed opportunities across the PrEP continuum. However, for those who did start PrEP, there have been some improvements in continuation from 2017 to 2019.

Segal ended her presentation with some lessons learned and ideas to assist with PrEP implementation that are relevant in Kenya and elsewhere. These included investing in and expanding the demand for PrEP, by using social initiatives in the general population alongside tailored outreach to specific groups. She also emphasised the need to replicate successful approaches, such as multi-month dispensing, integrating PrEP with other sexual health and reproductive services, and peer and partner interventions.

Importantly, countries need to increase funds available for PrEP in order to improve access and uptake. These considerations are particularly important in light of new methods, such as injectable and implant-based PrEP.