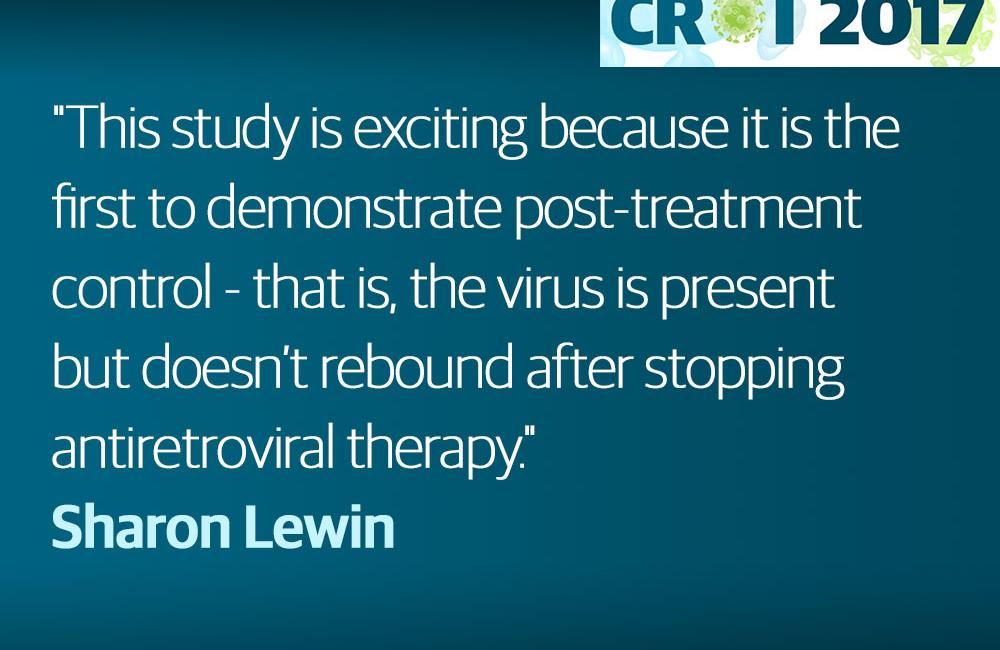 A so-called ‘HIV Conserv’ vaccine has, for the first time, produced significant prolonged viral control in a large minority of recipients once they were taken off antiretroviral therapy (ART). So far, one participant has stayed off ART for seven months without having to resume it. Presenting at the Conference on Retroviruses and Opportunistic Infections (CROI 2017), Beatriz Mothe said that viral control in recipients of the vaccine occurred more frequently than spontaneous control of HIV seen in previous studies of treatment interruption.

Although a number of vaccine studies in monkeys have produced long-term viral suppression, this is the first human study to produce such an effect.

The BCN02 vaccine trial is still ongoing and follows on from a single-dose trial, BCN01, which researcher Beatriz Mothe reported at CROI last year (see reference).

The first trial recruited 15 people who started treatment soon after HIV infection and gave them a single dose of an HIV Conserv vaccine (or 'HIVconsv').

For a fuller explanation of what HIV Conserv vaccines are and how they work, see this report. In brief, they contain selected antigens (immune-stimulating sequences of proteins or genes) from HIV that are highly conserved, hence the name. ‘Highly conserved’ means that they are the parts of HIV the virus can least afford to change, and which vary little from one virus to another.

The vaccine thus consists of sections of proteins from different strains of HIV stitched together that generate an immune response to HIV that the virus finds it hard to ‘escape’ from. It cannot afford to generate mutations that get round the body’s immune responses because to do so would weaken it.

What this means is that the vaccine ‘pushes’ the body’s anti-HIV CD8 T-cell response in the direction of becoming more potent and less wasteful, because the body does not generate responses that the virus can easily evade. In the BCN01 study, the researchers established that this was exactly what had happened.

For the second study the researchers worked with the same 15 participants, giving them two more doses of the HIV Conserv vaccine at weeks 0 and 9. Also, at weeks 3, 4 and 5, they gave them three infusions of the latency-reversing drug romidepsin, which is an immune-stimulant drug that has been tried in so-called ‘kick-and-kill’ HIV cure experiments.

The idea of using an HIV vaccine combined with romidepsin is to use the romidepsin to stimulate bursts of viral production while the partipicant is still on antiretroviral therapy (ART). The immune response stimulated by the vaccine “sees” these bursts of viral replication, thus strengthening and fine-tuning this response.

HIV DNA in cells was measured at week 0, in weeks 3-5 while the romidepsin was being given, and at week 9. The proportion of CD8 cells that were HIV-sensitive was measured at weeks 0, 1, 3, 9, 10 and 13. ART was stopped at week 17 in a so-called Monitored Antiretroviral Pause (MAP). ART was resumed if there was viral rebound.

There were 14 men and 1 woman in the study. Their average age was 40 and they had all started ART early – an average of three months and a maximum of 5.5 months after the estimated date of HIV infection. They had all been on ART for over three and under four years. They were all on integrase inhibitor-containing regimens and their average CD4 count was 728 cells/mm3 (minimum 416).

The vaccine produced mild flu-like side-effects of which the most common were headache, fatigue and muscle aches.

The three infusions of romidepsin were accompanied by short bursts of viral production, despite ART, in the order of 50 to 400 copies/ml, with a few to 1000 copies/ml, in all but one participant. These were accompanied by similar bursts of T-cell production: CD4 counts went up by about 200 cells/mm3 during each infusion, but were back to where they were beforehand after three days.

The anti-HIV CD8 cell responses did increase during the study, both after the initial vaccine dose and after the romidepsin. But equally importantly, the type of immune response shifted from being one characterised by a broad response to all HIV proteins to a situation in which three-quarters of the immune response was to the highly conserved viral regions targeted by the vaccine.

So far 13 of the 15 trial participants have interrupted their ART. For 8 of the 13, their viral load rapidly rebounded to pre-ART levels (averaging about 100,000 copies/ml) within four weeks and they started ART again.

These five participants represent 38% of the group, which is considerably in excess of the 1-2% of people who typically spontaneously control their viral load after stopping ART.

What made a difference between being a ‘rebounder’ and a ‘controller’? Proviral DNA in cells mattered: the controllers were all within the lower half of viral DNA measurements. There was no correlation with the strength of the immune response, but there was a correlation with its specificity: all controllers had a greater proportion of their immune responses tuned to the highly conserved regions of HIV.

It looks as if the vaccine has helped to strengthen a phenomenon sometimes seen in people who start treatment very soon after infection. Such people naturally develop smaller DNA ‘reservoirs’ and because of this, preserve some degree of effective immune control of HIV, because they lack the proliferation of viral strains that occurs in chronically untreated people. Such proliferation overwhelms the ability of their immune system to adapt to it. The vaccine not only strengthens this useful response, it also redirects it into a more efficient form.

"This study is exciting because it is the first to demonstrate post-treatment control – that is, the virus is present but doesn’t rebound after stopping antiretroviral therapy," said Sharon Lewin, Director of The Peter Doherty Institute for Infection and Immunity, The University of Melbourne, Australia. "However we also need to be cautious – there was no control group and we don’t know which part of the intervention was important – the early vaccine? The second vaccine? Romedepsin? All of the above?

"At the same time, until now, in every other study involving treatment interruption, post-treatment control has been rare and at most happens occasionally. So this is a promising and significant step forward. We definitely need a follow-up study that is larger, has a control group who receive no intervention and a less complicated vaccine schedule. We'd want to understand why some people controlled too – currently they don’t know the answer to this."