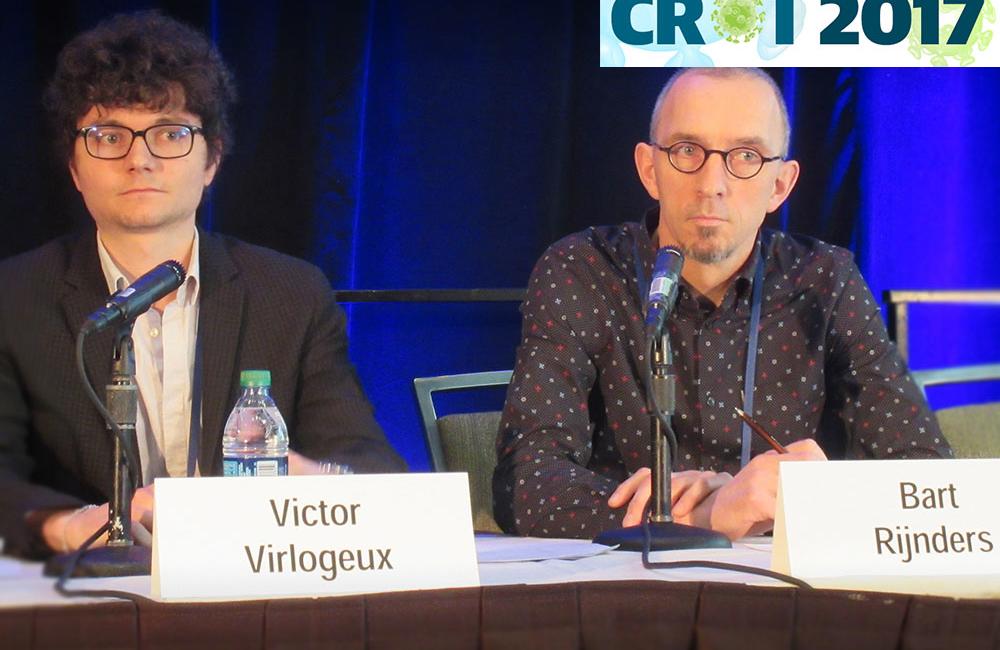 A little more than a year after the Netherlands instituted a policy allowing unrestricted access to direct-acting antivirals for the treatment of hepatitis C, researchers have already seen a dramatic decline in acute hepatitis C virus (HCV) infections among one at-risk population, HIV-positive men who have sex with men.

These findings were reported on Thursday at the Conference on Retroviruses and Opportunistic Infections (CROI 2017) in Seattle, in a session that also included presentations on rising incidence of HCV infection among HIV-positive gay men in San Diego and predictions about eradication of HIV/HCV co-infection in France.

Starting in the early 2000s researchers began to report outbreaks of acute hepatitis C in European cities. Although sexual transmission of HCV is rare overall, it occurs more often among HIV-positive men who have sex with men (MSM).

The advent of direct-acting antivirals (DAAs) used in interferon-free regimens has made hepatitis C treatment faster, easier and much more effective, with cure rates exceeding 90%. Promptly treating everyone infected with HCV, especially those in high-risk groups such as sexually active gay men and people who continue to inject drugs, could cut transmission – a concept known as 'treatment as prevention'. But in many countries access to DAAs has been limited due to their high cost, including restrictions around liver disease severity and abstinence from drugs or alcohol.

Direct-acting antivirals in the Netherlands

Anne Boerekamps of Erasmus University Medical Centre in Rotterdam and colleagues looked at outcomes among people with HIV/HCV co-infection after restrictions on the use of DAAs were lifted in the Netherlands. As of November 2015, DAAs can be prescribed to all people with co-infection regardless of liver fibrosis stage.

The researchers looked at participants in the Dutch ATHENA cohort, an ongoing study of HIV-positive people in care since 1998. Of the 22,042 cohort participants screened for HCV at least once, the study team identified 2422 with HCV co-infection. Of these, 1420 remained in care; most of the rest either never had a confirmatory test, spontaneously cleared HCV, died or were lost to follow-up.

Most of those still in care were men (89%) with a mean age of 49 years. More than 90% were on antiretroviral therapy with an undetectable HIV viral load. Two-thirds were MSM and 16% had a history of injection drug use. The most common HCV genotypes were 1 (61%) and 4 (16%) and a third had severe liver disease.

The number of people with co-infection receiving treatment rose dramatically and rapidly after the restrictions were lifted. The researchers saw a high level of treatment uptake among people without severe liver disease – a group that previously would have been largely denied treatment.

As of May 2016 – six months after unrestricted DAA availability – 78% of people still in care had started hepatitis C treatment with either interferon-based therapy or DAAs, and 65% had achieved sustained virologic response (SVR) or were still undergoing treatment.

As of January 2017, 82% had started treatment and 70% were either cured or still on therapy. Among people treated with DAAs, the SVR rate was very high, at 98%. About three-quarters (76%) of gay and bi men had been cured or were still on treatment, compared to 45% of other groups.

The researchers noted that women, former injection drug users and people with uncontrolled HIV disease were disproportionately more likely to still need hepatitis C treatment. Asked about the under-representation of women, Boerekamps noted that women with hepatitis C in the Netherlands are largely from Africa and may have more barriers to receiving care.

Her colleague, Bart Rijnders, added that gay men had been targeted for treatment in an effort to interrupt transmission networks. At a CROI press conference Rijnders said that hepatitis C treatment uptake was very rapid among gay and bi men with co-infection, as this group is very eager to be cured as soon as possible because the do not want to transmit HCV to their partners.

Rijnders presented late-breaking findings on changes in acute HCV infections among HIV-positive MSM since the DAA roll-out, comparing HCV incidence in 2014 and 2016 – the first full year of unrestricted DAA availability.

A Dutch mathematical model predicted that immediate DAA treatment for HIV-positive MSM would reduce – though not eliminate – new HCV infections in this population, and this study aimed to provide real-life data.

This analysis looked at data from 17 HIV treatment centres throughout the Netherlands, accounting for about 80% of Dutch HIV-positive MSM in care. In most cases acute HCV was defined as a positive HCV RNA test following a negative one.

Annual incidence also declined further during 2016, from about 0.7% during the first half of the year to 0.4% during the second half.

Rijnders noted that there was an "astonishing" 41% increase in new syphilis cases among HIV-positive MSM during this period, so he was confident the reduced HCV incidence was not attributable to changes in sexual risk behaviour – and in fact there was evidence on an increase in 'chemsex' and 'slamsex' (drug use and drug injection associated with sex).

"For the first time in more than 10 years, the incidence of acute HCV in HIV-positive MSM in the Netherlands dropped substantially," the researchers concluded. "Unrestricted access and use of DAA for the treatment of chronic (and acute?) HCV is the most likely explanation."

"This is an example of what is possible if you have the money and the drugs to treat everyone," Rijnders told reporters at the press conference.

Victor Virlogeux of INSERM in Lyon reported findings from a mathematical model looking at changes in the epidemiology of HIV/HCV co-infection in France in the DAA era.

Like the Netherlands, France allows unrestricted access to hepatitis C therapy for people with co-infection. Treatment uptake has risen sharply in this group, with nearly two-thirds being cured by the end of 2016, Virlogeux said.

The model, based on data from the French DatAIDS cohort, considered eight risk groups: high-risk and low-risk MSM, heterosexual men and women, men and women who inject drugs, and men and women with other HCV risk factors.

The researchers estimated that as of 1 January 2016 approximately 157,000 people were living with HIV in France, of whom around 7200 had active HCV co-infection and were receiving care.

Assuming chronic hepatitis C treatment coverage of 30% per year – the observed level in 2015 – the model predicted that overall HCV prevalence would drop from 5.1% to 1.1% in 2026, equivalent to around 2000 people. Increasing coverage to 50% would result in 1136 people living with active HCV in 2026, while 70% coverage would reduce this number to 913. Over time, the proportion of undiagnosed people would increase as those already diagnosed were treated and cured.

Similar decreases were seen for most subgroups, including low-risk MSM. For instance among men who inject drugs – the largest group with HCV – prevalence was expected to drop from 33.1% to 2.4% in 2026, resulting in just 173 people with active HCV infection in 2026.

Given their high acute HCV infection and reinfection rates, however, prevalence among high-risk MSM was projected to decrease only slightly – from 7.0% to 6.3% in 2026 at the current 30% treatment coverage level.

Increasing treatment would bring the prevalence in this group down to 2.4% with 50% coverage per year and to 1.3% with 70% coverage. But the number of high-risk MSM in care would fall below 100 only if coverage rose to 90%. Adding treatment for acute HCV infection would have a small benefit.

The researchers concluded that eradicating HCV in the HIV-positive population in France would require behavioural risk reduction for high-risk MSM, regular screening for this group, regular testing for reinfection in cured people, maintaining treatment coverage above 30% and targeted undiagnosed individuals for engagement in care.

HCV among MSM in San Diego

Press conference moderator David Thomas of Johns Hopkins School of Medicine called attention to the contrast between European countries where HCV incidence among HIV-positive gay men is falling as treatment coverage increases, and the US where treatment access is still heavily restricted and incidence in this population appears to be rising.

Turning to the US, Natasha Martin of the University of California at San Diego presented findings on the incidence of HCV infection among HIV-positive gay and bi men seen at the Owen Clinic, the largest HIV clinic in San Diego, between 2000 and 2015.

This retrospective cohort analysis included 2395 HIV-positive MSM who were initially HCV-negative and had at least one additional HCV test. The average age was 38 years and 68% were white; 0.3% reported a history of injection drug use only, 42% reported methamphetamine use only and 5% reported both.

There were 149 cases of primary or initial HCV infection, for an incidence rate of 1.2 per 100 PY or 1.2%. There were no notable differences according to age or race/ethnicity. This is similar to levels reported for HIV-positive MSM in Seattle and Boston, but more than double the rate previously observed in the US Multicenter AIDS Cohort Study (MACS).

However, when stratifying this population according to substance use, there was no significant change in incidence among men who reported neither drug injection nor methamphetamine use, but a significant increasing trend among meth users.

The researchers also identified three cases of HCV reinfection among 43 men who were successfully treated, for an incidence rate of 2.9 per 100 PY or 2.9%. Though two- to three-fold higher than the initial infection rate in this population, this was lower than reinfection rates reported in European cities including Amsterdam (15.2%) and London (9.6%).

Martin said that rapid HCV diagnosis and treatment as well as behavioural risk reduction strategies are needed to stem the HCV epidemic among HIV-positive gay men. Studies have shown that once-yearly HCV testing is most cost-effective for this group, but she suggested that we may need to revisit optimal timing in light of a rising incidence trend.