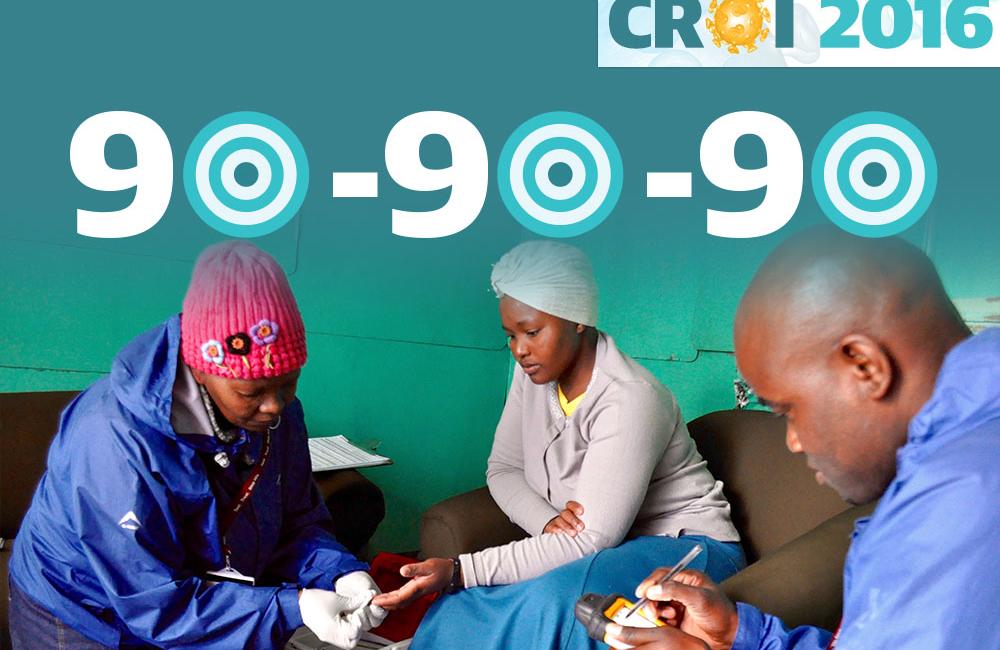 The preliminary findings on testing and treatment coverage were presented on Wednesday at the Conference on Retroviruses and Opportunistic Infections (CROI 2016) in Boston. The primary outcome of the study – the impact of expanded treatment coverage on HIV incidence – is expected to be reported in mid-2018.

PopART, also known as HPTN 071, is a large community-randomised trial being carried out in Zambia and Kwazulu Natal, South Africa. The study is testing the impact on HIV incidence of household-based HIV testing and linkage to care by community HIV care providers (CHiPs), and immediate initiation of antiretroviral treatment delivered through routine health care services.

PopART is an important test of the feasibility of offering testing and treatment at a very large scale, essential for achievement of the 90-90-90 target of 90% diagnosed, 90% of diagnosed people on treatment and 90% of those on treatment virally suppressed.

Evidence from the pilot phase suggests that although progress is a little slower than expected, it is possible to achieve high levels of testing and treatment initiation – the first two 90s – in sub-Saharan Africa.

Dr Sarah Fidler, Reader in HIV at Imperial College, London, presented details of the antiretroviral treatment coverage achieved in the first phase of the PopART study, a pilot in seven communities, which recruited participants from November 2013 to mid-2015.

In these communities annual rounds of home-based HIV testing are taking place, carried out by community HIV care providers (CHiPs). The CHiPS refer people to local health care facilities and follow up with home visits to ensure linkage to care, adherence to treatment and retention in care. Men who test negative are referred for male medical circumcision and the programme provides HIV education and condoms, as well as promoting the availability of sexual health and TB services.

Dr Fidler presented results from Round 1 in the immediate ART initiation communities. Home-based HIV testing diagnosed 12,840 adults in Zambia and 3,300 adults in South Africa in Round 1. Around half of those who underwent home-based testing were already aware of their HIV-positive status and were taking antiretroviral treatment. After referral to care 58% had started treatment within 12 months in South Africa and 53% in Zambia.

Dr Fidler said that “in our experience, time is the most important factor in terms of reaching the second 90 goal.” The study had set a target of 80% initiation within three months of referral, but in all settings and in both men and women, treatment initiation was slower than hoped for. Six months after referral 42-44% of people in Zambia had started treatment but by one year after referral 58% of people were taking antiretroviral treatment.

Overall, a combination of existing treatment according to national guidelines and the Round 1 efforts to diagnose and link people to care, together with immediate treatment initiation, led to treatment coverage of 71% of men and 72% of women in Zambia, and 58% of men and 69% of women among those still resident in the trial communities. The study interventions had a similar impact on improving treatment coverage in men and in women in both Zambia and South Africa, and reduced the total population of diagnosed but untreated people living with HIV by 43%.

PopART investigators say that decongestion of clinics will be necessary in order to cope with the volume of new patients. Increasing the amount of drugs dispensed so that clinic visits can be reduced, delivery of ART in the community through innovative mechanisms like adherence clubs and differentiation between stable and higher-need patients are all needed in order to  reach the second 90 goal.

The scale of the task – and the need for innovative thinking on how to manage the growing number of people in HIV care – was emphasised by Professor Diane Havlir of the University of California, San Francisco, who reminded a press conference just what the 90-90-90 target means in human and health system terms. “We’re going to need to increase the number of people on treatment by 16 million by 2020,” she said.

Study investigators presented results of Round 1 household-based testing in Zambia, carried out between December 2013 and June 2015 in four communities with an adult population of 100,000. CHiPs visited 48,790 households and 101,578 adults (83%) consented to take part. At baseline 47% knew their HIV status; at end of Round 1 89% knew their status. Women were more likely to test positive than men (15.5% vs 9.1%) but also more likely to consent to testing, and the investigators concluded that although they are close to reaching the first `90` target, new strategies need to be investigated to reach more men and increase the uptake of testing among men.