People with HIV considerably overestimate their chance of infecting someone 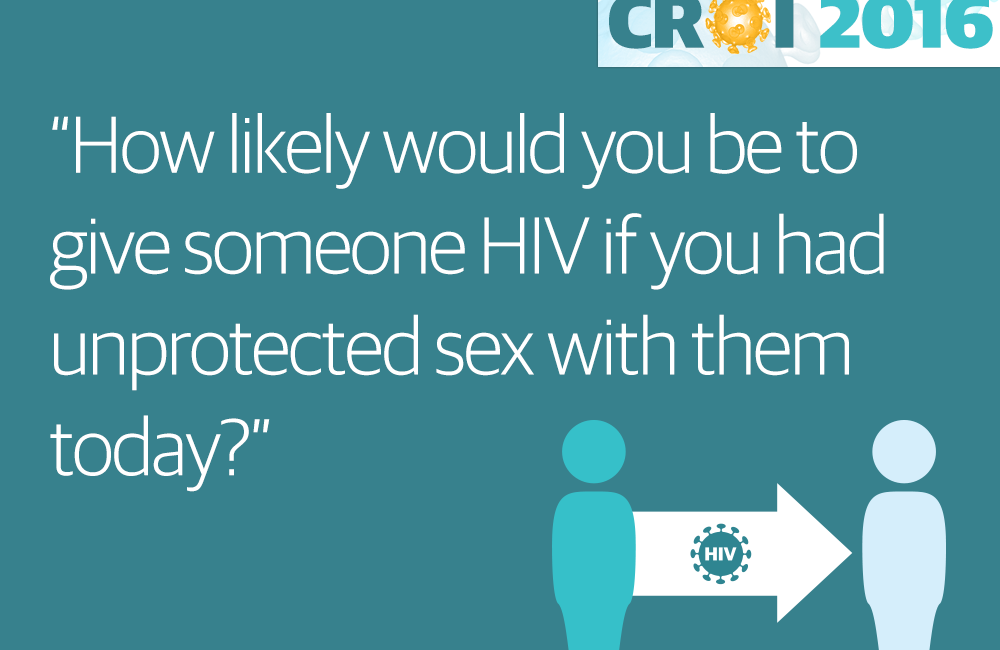 Only a small proportion of HIV-positive people in a large US treatment study, ACTG A5257, regarded themselves as non-infectious after up to three years on antiretroviral therapy (ART), and a third of participants regarded their chance of infecting a partner as still “high”, even though only 10% of participants actually had a detectable viral load, the Conference on Retroviruses and Opportunistic Infections (CROI 2016) heard yesterday.

The study showed that there was no correlation between a person’s actual viral load and their belief about how infectious they were, Dr Raphael Landovitz of the University of California in Los Angeles told the conference.

ACTG A5257 was a large drug-comparison study in which 1809 participants were randomised to receive either raltegravir, boosted atazanavir or boosted darunavir, plus tenofovir/emtricitabine. The 96-week results were presented at the CROI 2014 conference. The trial enrolled participants between 2009 and 2011 and patients were asked about their infectiousness beliefs one, two and three years after starting ART, so this study includes responses up to 2014.

A quarter of the study population was women, the mean age was 37, and ethnicity was distributed quite evenly, with 34% white, 42% African-American and 22% Hispanic. The median viral load at baseline was 40,000 copies/ml, with 30% having a viral load over 100,000 copies/ml.

The participants were asked the question “How likely would you be to give someone HIV if you had unprotected sex with them today?”

As the start of the study, 58% thought they were highly infectious, and 26% placed themselves in the “medium” category. This left 16% who thought – at this point inaccurately – that their risk of infecting another person was “low” (10%) or zero (6%).

After a year on ART, a higher proportion – just under one-third – thought their risk of infecting someone was low. But 38% still thought their infectiousness was high. The percentage who thought they were not infectious at all had increased slightly to 10%. (Incidentally, 8.1% of this 10% – just eight individuals – were actually mistaken in their belief at this point, did have a detectable viral load, and were, to at least some extent, infectious.)

At week 48, young people aged under 30 were somewhat more likely than average to regard their infectiousness as having fallen. Black people, people with lower educational attainment, and people who entered the study with a very low CD4 count were less likely.

Women and Hispanic people were more likely to put themselves in the "not infectious" category at week 48, and users of recreational drugs and those who at baseline had seen themselves as highly infectious were less likely.

The study team will now analyse the data further to find if people’s beliefs about their infectiousness had any impact on their sexual risk behaviour and choices of partner.

Given that people’s beliefs about their infectiousness, although changing somewhat after starting treatment, had little relationship to whether they were infectious, Dr Landovitz was asked whether patients were taking over-cautious messages from healthcare professionals to heart, or felt, due to HIV stigma, that they still had to profess a belief in their own infectiousness.

Dr Landovitz commented that ACTG A5257 spanned the period during which, in May 2011, the results were announced from the HPTN 052 study, which confirmed that people with HIV who were on ART were rarely infectious. This result appears to have had little impact on the ACTG A5257 participants. However the trial finished around the time that the even more persuasive PARTNER study, which found no transmissions from anyone with an undetectable viral load, announced its interim findings; Dr Landovitz commented that if this same sub-study was repeated today, people’s beliefs about their infectiousness might be different.

Asked what message we should give to patients about viral load and infectiousness, he commented: “Don’t give them a dumbed-down message and talk in absolutes. In my experience, people want nuanced information about their risk of infecting others and want to be able to make up their own minds.”