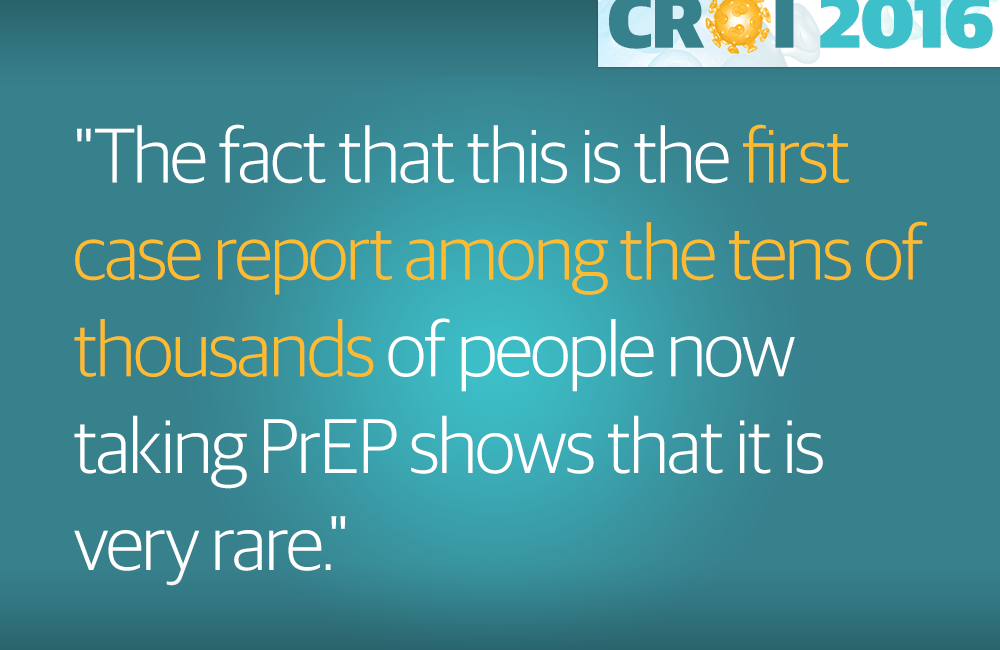 A case report of a man in Toronto who became infected with a multi-drug-resistant strain of HIV despite apparently very consistent adherence to PrEP was presented at the Conference on Retroviruses and Opportunistic Infection (CROI 2016) conference in Boston today.

Dr David Knox, a doctor at Toronto’s Maple Leaf Medical Clinic, said the patient was a 43-year-old gay man who had been on PrEP for two years. At the time he started PrEP he had an HIV-positive partner who was undetectable on antiretroviral therapy, but also had other sex contacts involving the risk of HIV exposure.

He was a regular attender at the clinic and tested for HIV on average every three months. It was suggested to him that he start Truvada PrEP in April 2013 and he appeared to have good adherence to it on the basis of the frequency of pharmacy refills.

Two years later in April 2015 he started having symptoms after a period of exposure to HIV with multiple partners. The symptoms were not classic HIV seroconversion symptoms, and may have had nothing to do with the HIV; they involved an episode of fever with abdominal pain severe enough for him to go for hospital investigation, where a scan revealed an inflamed colon.

During this time he came in for his regular HIV and STI test and this showed he had acute HIV infection, with a negative test for HIV antibodies but a positive test for the HIV p24 antigen, which shows up sooner. His HIV viral load three days later was 28,000 copies/ml – rather low for acute HIV infection and suggestive that either his PrEP had ‘blunted’ viral replication without stopping infection, or that the highly drug-resistant virus was replicating weakly.

The patient was adamant that he maintained excellent adherence to PrEP so Dr Knox, by now concerned that he might be seeing a case of genuine PrEP failure, ordered more tests. One was a resistance test, for all antiretroviral drug classes, for his patient’s virus, from a sample taken a week after his HIV diagnosis.

The other needs explanation. The patient was treated within a cash-poor public health setting and his old blood samples had not been saved. So there was no way to directly prove that he had drug levels consistent with high adherence around the time of HIV exposure.

There was an indirect way, however. Dr Knox analysed a so-called Dried Blood Spot (DBS) from the patient taken 20 days after he was diagnosed. The point of a DBS test is that it measures drug levels inside red blood cells, rather than inside the white blood cells HIV infects, or in blood plasma. Drug levels rise much more slowly inside red blood cells, taking 17 days to reach half of their steady-state levels, and a full eight weeks to reach the drug-saturated steady state completely. Drug levels also rise steadily and are less susceptible to short-term peaks and troughs. Drug levels in the patient’s DBS were actually 47% higher than the average figure, suggesting consistent PrEP adherence for most of the period covering his exposure to HIV. If he had only been taking the drugs since he learned his diagnosis, the drug levels would only be 47% of the average steady state level or 31% of their actual level in this patient.

This is an indirect way of measuring drug levels. Given that the onset of symptoms occurred four weeks before the patient’s HIV diagnosis and the dried blood test was taken over three weeks after, and that the period of risk according to the patient started two weeks before the onset of symptoms, thus leaving nine weeks for the drug to accumulate, this test did not entirely rule out the possibility that he had been off PrEP at the time he took a risk and that this had prompted him to start taking it again. However, the patient insists this is not the case.

There was a small blood sample left over from his diagnostic test, taken three days before the patient learned he had HIV. This revealed high levels of tenofovir and levels of emtricitabine so high they were above the test’s limit of quantification. However this was not a test of long-term drug levels and again cannot completely rule out the possibility that he had had a lapse in adherence around the time he was exposed to HIV.

Not relevant to the apparent PrEP failure, but to the spread of drug resistance, was the fact that this patient also had two resistance mutations to the integrase inhibitor drugs and complete resistance to the drug elvitegravir.

Transmission of HIV with integrase inhibitor resistance is very rare, and especially resistance to drugs other than raltegravir, the first integrase inhibitor. The pattern of resistance observed is compatible with the unnamed person who passed on the virus being on a failing regimen of Stribild (the two-class, four-drug combination pill of tenofovir, emtricitabine, elvitegravir and cobicistat). Given that four out of the five first-line HIV drug regimens recommended by the US Department of Health and Human Services are integrase inhibitor-based, and that this drug class is being investigated for use as PrEP, it would be of concern if more integrase inhibitor-resistant virus started to circulate.

The patient himself was put on a potent three-class regimen of dolutegravir, rilpivirine and boosted darunavir and became virally undetectable only three weeks after starting it. The is no0w on a less intensive maintenance therapy.

In conclusion, this is probably not an absolutely clinching case – one would need drug level samples taken at the time of infection for that. But on the balance of probabilities, with three different measures all supporting the patient’s self-report, this is probably the first documented case of the failure of Truvada PrEP despite high adherence and more-than-adequate drug levels though recently two cases on solo tenofovir were published.

It is not unexpected that there would be occasional cases of PrEP failure; but the fact that this is the first case report among the tens of thousands of people now taking PrEP shows that it is very rare.