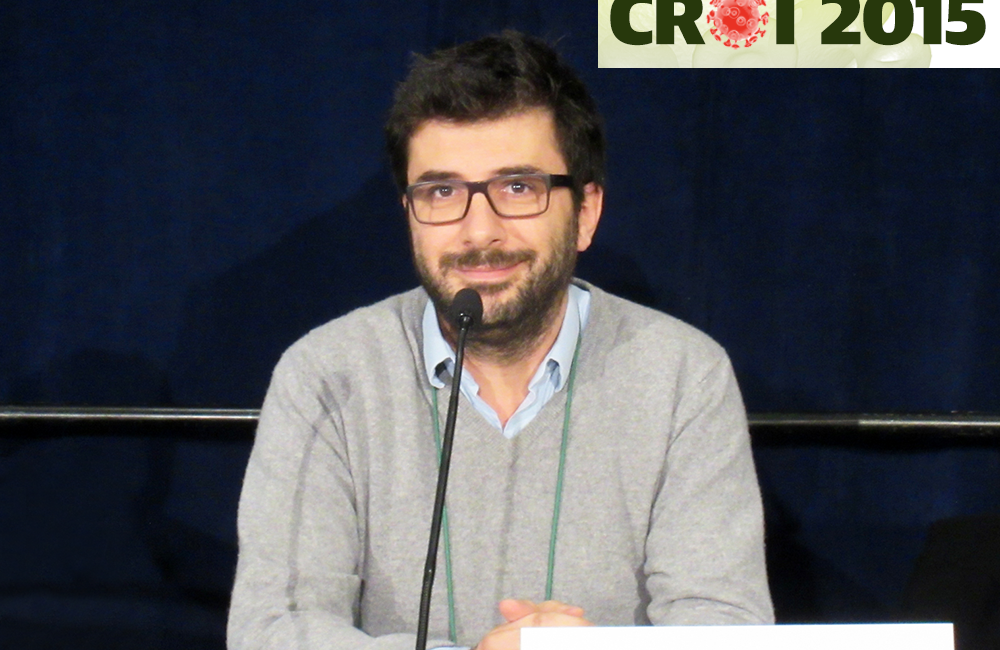 David Maman presenting at CROI 2015. Photo by Liz Highleyman, hivandhepatitis.com
This article is more than 8 years old. Click here for more recent articles on this topic

Reaching ambitious HIV prevention targets in South Africa will require intensified efforts to engage and retain men and young people in care, in order to increase the proportion of people on HIV treatment with suppressed viral load, a national study has found. The results were presented on Thursday at the Conference on Retroviruses and Opportunistic Infections (CROI 2015) in Seattle, USA.

Another study, conducted in three countries in sub-Saharan Africa, showed that to maximise the preventive effect of treatment, efforts to expand treatment coverage need to focus on those with the highest viral load off treatment – mainly people who are already eligible for treatment under current guidelines.

South Africa already has the largest antiretroviral treatment programme in the world. Over the past decade the country has scaled up from around 50,000 people on treatment in 2004 to more than 2.1 million people on treatment by the end of 2012, and has built an extensive programme for prevention of mother-to-child HIV transmission (PMTCT).

However, as well as the largest treatment programme in the world, South Africa also has the largest number of new infections. 400,000 people in South Africa are estimated to have been infected with HIV in 2012 alone. Reducing the rate of new infections is critical to ensure the long-term sustainability of the existing treatment programme, as well as for the prevention of future illness and death.

Epidemiological modelling has projected that South Africa – and neighbouring countries – could achieve big reductions in HIV incidence if the number of people with fully suppressed viral load on treatment can be increased. Until now, South Africa lacked a robust estimate of how many people have suppressed viral load, and which groups of people are more likely to be linked to care and retained on treatment.

Simbarashe Takuva of the National Institute for Communicable Diseases presented results of a study designed to show how South Africa's 'treatment cascade' is performing, and where improvement is needed in order to maximise the preventive benefit of antiretroviral treatment.

In the absence of an integrated national surveillance system the research group, supported by epidemiologists from Public Health England, combined population data from the National Household Survey and Vital Registration Data from 2012 to estimate the size of the population of people living with HIV. They also used laboratory data from the National Health Laboratory Services to estimate the numbers engaged in care (using CD4 count measurements as a proxy) and on treatment and virally suppressed (using viral load measurements as a proxy).

The study found a major disparity by gender, and also found substantial disparities by age group. Young people aged 15-24 were much less likely to be on treatment and virally suppressed than people aged 25-49, despite similar rates of linkage to care. Although this may be partially explained by more recent HIV acquisition and hence higher CD4 cell counts in this group, the treatment gap in this group remains very large. Young people aged 15-24 were 24% less likely to be virally suppressed than their older counterparts.

The findings showed that more focus is needed on improving engagement with care, especially among men and young people, said Simba Takuva, together with improving opportunities to test for HIV.

A three-country survey of viral load measurements in people not taking antiretroviral treatment found that any attempt to maximise the preventive benefit of treatment probably needs to focus first on getting those individuals already eligible for treatment onto treatment, rather than seeking to expand treatment eligibility criteria to reflect results of the Temprano study presented this week.

The study, carried out in three districts where Médecins sans Frontières provides HIV treatment in care in Kenya, Malawi and South Africa, looked at a range of correlates of high viral load in people not taking antiretroviral treatment in each setting. (A companion study on viral load in breastfeeding women was presented earlier in the week).

HIV prevalence ranged from 17% in Malawi to 25% in South Africa. Sixty per cent of people tested were eligible for treatment under national guidelines in Kenya, compared to 69% in South Africa and 80% in Malawi. This difference was driven chiefly by national policies on antiretroviral treatment for pregnant and breastfeeding women. Whereas 62% of people with HIV had a viral load below 1000 copies/ml in Malawi, only 40% had a viral load below 1000 copies/ml in Kenya.