Starting HIV treatment at CD4 count above 500 reduces the risk of serious illness and death by 44%, African Temprano trial shows 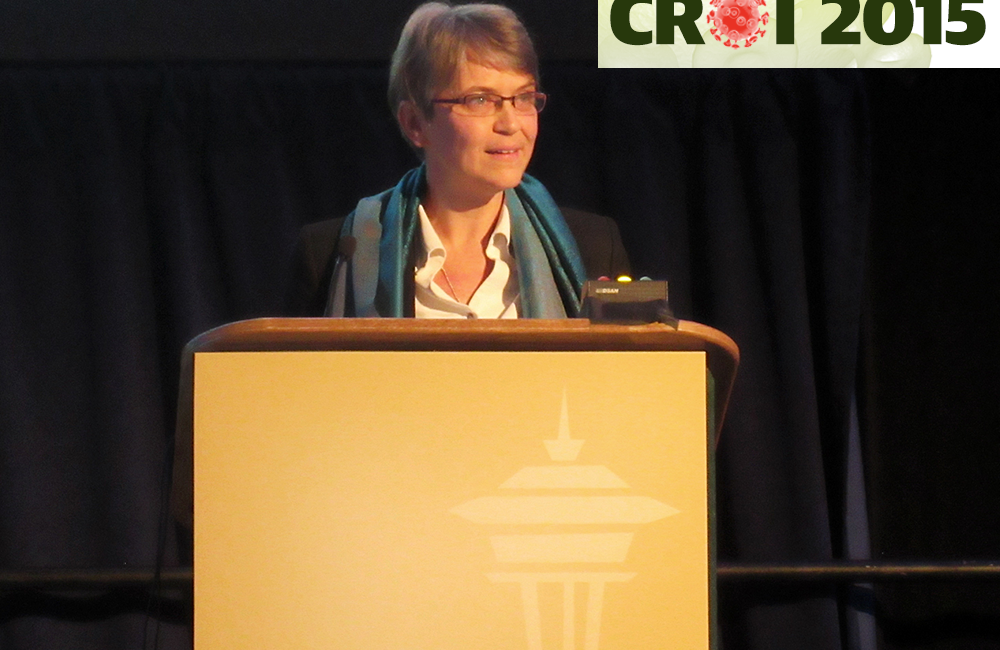 Christine Danel presenting at CROI 2015. Photo by Liz Highleyman, hivandhepatitis.com
This article is more than 8 years old. Click here for more recent articles on this topic

Starting HIV treatment at a CD4 cell count above 500 reduced the risk of serious illness including tuberculosis (TB), and death, by 44% when compared to starting treatment according to World Health Organization (WHO) guidelines, results from the seven-year Temprano study show. The findings were presented on Wednesday at the Conference on Retroviruses and Opportunistic Infections (CROI 2015) in Seattle, USA.

The study also found that a six-month course of isoniazid preventive treatment reduced the risk of developing TB by 35%.

Temprano was designed to test the safety and efficacy of early HIV treatment initiation compared to standard treatment initiation in a lower-income setting with a high prevalence of TB and bacterial infections. The study was conducted in Ivory Coast by the French AIDS research institute ANRS.

The study was also designed to test whether isoniazid preventive therapy (IPT) offered additional benefit in preventing TB for people living with HIV, over and above taking antiretroviral therapy. Despite evidence that it is effective in preventing TB in people living with HIV, IPT is not implemented in many settings, due in part to difficulties in ruling out active TB, but also because of concerns that it will lead to resistance to isoniazid in people who turn out to have active TB after starting IPT.

The study recruited previously untreated people with HIV with CD4 cell counts below 800 cells/mm3 without active tuberculosis, and randomised them into four groups, taking antiretroviral therapy (ART) and isoniazid according to the following multifactorial scheme:

The study went through a number of protocol revisions to reflect changes in treatment guidelines.

The median CD4 count at study entry was 465 cells/mm3; 41% had a CD4 count above 500, 38% in the range 350 to 500 and 21% below 350. Seventy-eight per cent of study participants were women, with a median age of 35 years. Participants were followed for a median of 29 months; during this period, 58% of those randomised to the WHO arm became eligible for antiretroviral therapy and started treatment, after a median of 14.8 months in the study. Ninety per cent of those randomised to receive IPT started taking it, and of these, 94% completed the 6-month course.

When severe events were analysed only for those with CD4 counts above 500, in order to rule out any possible bias of changes in treatment guidelines over time, the effect of IPT ceased to be significant, but the effect of early treatment remained exactly the same as in the full trial analysis. It reduced the risk of severe events by 44%

Grade 3 and 4 adverse events were significantly more frequent in the early ART group during the first six months of treatment but thereafter they declined so that they were significantly less frequent (aHR 0.74, p = 0.003). This finding suggests that long-term drug side-effects do not cause significant morbidity in people who start treatment early.

Further analyses will be carried out to look at responses to treatment according to different CD4 counts at baseline.

The results of Temprano will lend support to the view that CD4 criteria for starting treatment should be dropped, and that the threshold for starting treatment should shift from a CD4 count of 500 to whenever the patient is ready to start, at least in lower-income settings where tuberculosis and bacterial infections are major causes of illness in people living with HIV. The START study of early treatment initiation will provide information about the risks and benefits of early treatment in developed world settings, where TB and bacterial infections do not cause substantial morbidity in people living with HIV. Results of the START study are expected in late 2016 or early 2017.