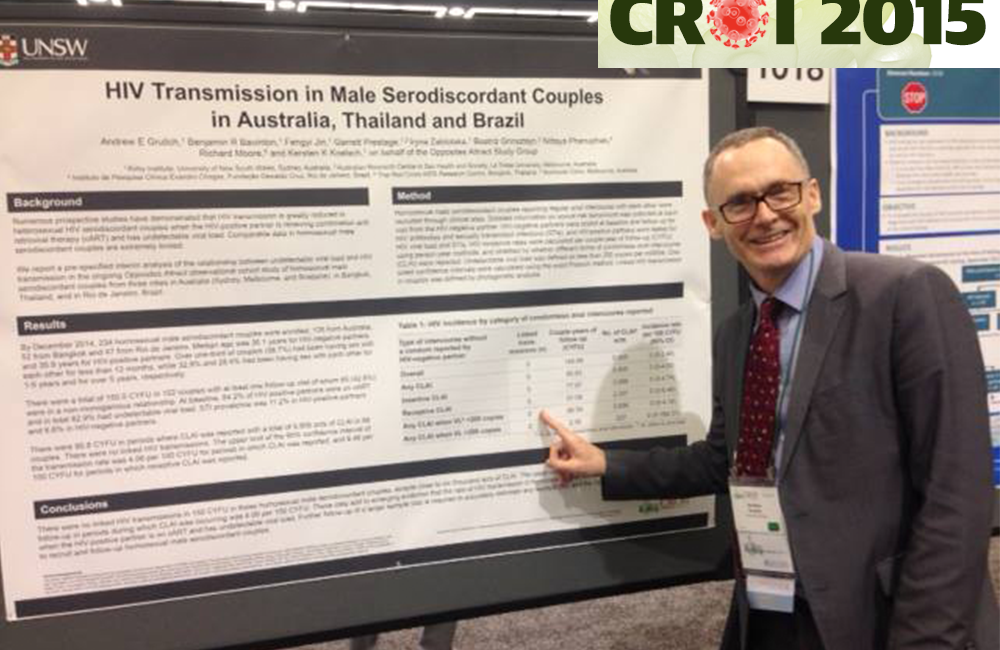 Andrew Grulich at CROI 2015. Image by The Kirby Institute (http://kirby.unsw.edu.au).
This article is more than 8 years old. Click here for more recent articles on this topic

An Australian-based study of gay male couples of opposite HIV status (serodifferent couples) has so far seen no transmissions from the HIV-positive partner within the couple in a two-year interim analysis.

The Opposites Attract study started recruiting in May 2012. It recruits gay male serodifferent couples regardless of whether the HIV-positive partner is on antiretroviral therapy (ART) or has an undetectable viral load, and also regardless of whether or not they use condoms. It is now recruiting not only in the three Australian cities mentioned (Sydney, Brisbane and Melbourne) but also in Cairns, Australia and (from 2014) in Bangkok, Thailand and Rio de Janeiro, Brazil.

By December 2014, by which time the average length spent in the study was one year, 135 couples from Australia had been enrolled, 52 from Bangkok and 47 from Rio. Their median age was 36 (with no difference in the HIV-positive and HIV-negative partners). Many relationships were new, with 39% of couples established for less than a year, 33% for one to five years and 28% for over five years.

At the start of the study, most of the HIV-positive partners were on ART (84%) and virtually all of these had an undetectable viral load (under 200 copies/ml).

Since the study is still enrolling, only the first 152 couples with at least one post-enrolment visit are included in this analysis.

No transmissions between couples (linked transmissions) have so far been seen in Opposites Attract. (Whether transmissions are linked or not is determined by genetically testing the HIV of any study participant who becomes newly infected to see if it closely resembles their regular partner’s virus.)

Because of the relatively small numbers of couples so far enrolled and of condomless sex acts seen, even though there have been no transmissions seen, the researchers have to state the degree of uncertainty of their findings, because no transmission is not necessarily the same as zero chance of transmission.