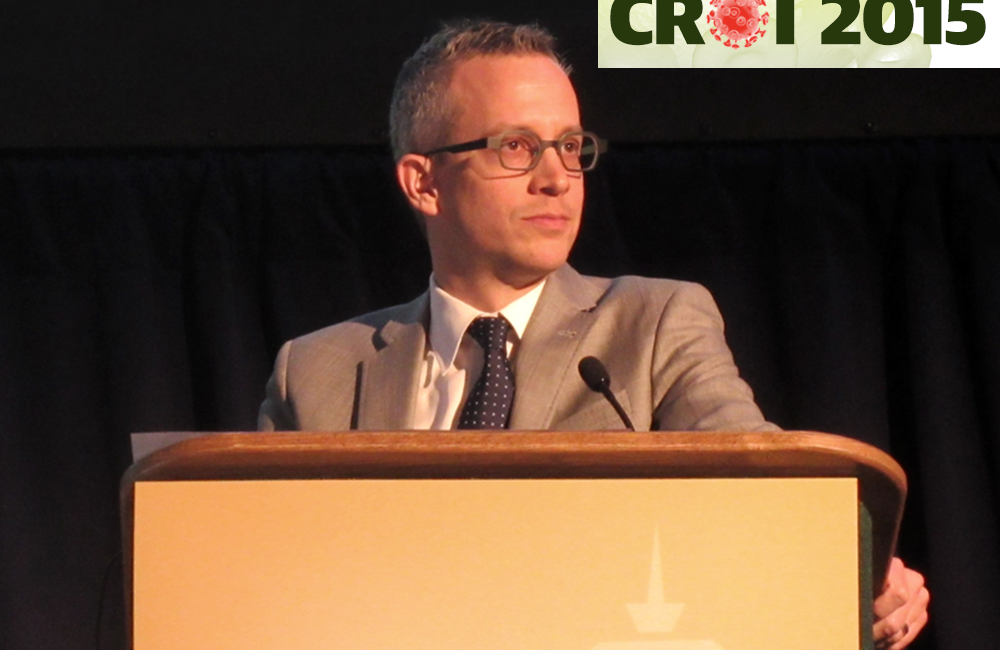 Jared Baeten presenting at CROI 2015. Photo by Liz Highleyman, hivandhepatitis.com
This article is more than 8 years old. Click here for more recent articles on this topic

Giving both pre-exposure prophylaxis (PrEP) and antiretroviral therapy (ART) to heterosexual couples where one partner has HIV (serodiscordant couples) can almost eliminate the chance of infection in the HIV-negative partner, a study presented at the Conference on Retroviruses and Opportunistic Infections (CROI 2015) in Seattle, USA, yesterday has shown.

This study was a first in a number of ways. It is the first to combine the ideas of PrEP and of 'treatment as prevention' in a systematic and sequenced way. It is the first large study in Africa to use a ‘risk score’ specifically to target the intervention to those most at risk of HIV. And it is the first study of treatment as prevention to document near-elimination of HIV transmission not just from the HIV-positive partner in a serodiscordant couple, but also from extramarital partners.

The Partners Demonstration Project (PDP) is being run in Kenya and Uganda in four centres that had hosted the Partners PrEP study, which demonstrated high levels of effectiveness for PrEP within serodiscordant couples. It is an ongoing project which will not finish until December 2016.

None of the 2026 participants (1013 couples) in the new study had been in Partners PrEP, and all were new to antiretroviral therapy, whether taken as treatment or PrEP. In two-thirds of couples, the female partner was the one who had HIV.

The HIV-positive partner is offered ART in accordance with national guidelines. At the start of the study, in November 2012, both Kenyan and Ugandan national guidelines recommended that ART be started at a CD4 threshold of 350 cells/mm3. In the second half of 2013, in accordance with WHO guidelines, both countries switched to offering ART immediately upon diagnosis to people with HIV who were in a serodiscordant relationship. The data presented cover the period from November 2012 to August 2014.

The couples were not chosen at random. The Partners Demonstration Project chooses couples in accordance with an algorithm that gives people risk scores, from one to ten, depending on whether one or both partners has characteristics that predict a high likelihood of transmission. Risk factors include younger age (20% of people in the study are under 25), fewer children, lack of circumcision if the HIV-negative partner is male, cohabitation rather than marriage, rates of recent unprotected sex, and high baseline vial load in the HIV-positive partner. Only couples with a risk score of more than five have been selected for the study.

The HIV incidence results in the Partners Demonstration Project are not compared with a placebo or control group who do not get PrEP and/or ART, as the evidence for the effectiveness of both is now so strong it was thought unethical to withhold them. Instead, the results are being compared with a historic control – HIV incidence in the placebo arm of the original Partners PrEP study, adjusted for the characteristics of the couples in the new study.

Adherence to both PrEP and ART has been excellent. In HIV-negative partners who started PrEP, and whose partner did not start ART, 91% and 84% respectively were still taking it six and twelve months later by self-report, and drug level monitoring detected tenofovir in 87% of samples from people on PrEP. In HIV-positive partners who started therapy, 90% achieved viral suppression.

The number of new HIV infections that would have been expected in these couples, if it had mimicked the rate in the historic controls, would have been about 40, equivalent to an annual incidence rate of 5.2%. Instead, there were two infections: this represents a reduction in the infection rate of 96%, and this was highly statistically significant (lower bound of the 95% confidence interval, 81%: p = <0.0001).

Furthermore, neither person infected was in a couple where one or both was taking antiretrovirals. The first woman infected (both were women) had split up with the man she had enrolled with and had stopped taking PrEP. The second infection was in a couple where the HIV-positive partner had a high CD4 count and did not wish to take ART, and the HIV-negative partner had stopped taking PrEP. Neither woman had detectable tenofovir in her blood at the time she was infected.

One important fact about the Partners Demonstration Project is that the 96% reduction in HIV infections applies to all infections – including ones from someone who was not the regular partner. In the groundbreaking HPTN 052 and PARTNER studies, reductions in HIV transmission by partners on ART were of this degree of magnitude, but in both studies a lot of the HIV-negative partners also acquired HIV through ‘extramarital’ sex. In the Partners Demonstration Project, the reduction applies to all infections regardless of source – showing that PrEP could have huge potential in non-monogamous singles and couples in Africa, as well as richer countries.

Jared Baeten concluded by commenting that the time was right for adoption of PrEP and combinations of PrEP and ART by some African governments. Kenya’s HIV Prevention Revolution Roadmap, for instance, now included recommendations for both ART and PrEP in serodiscordant couples. He said he also believed that the strategy had huge potential for prevention in other people at high risk, such as men who have sex with men and single women at risk.

View a webcast of this presentation here.